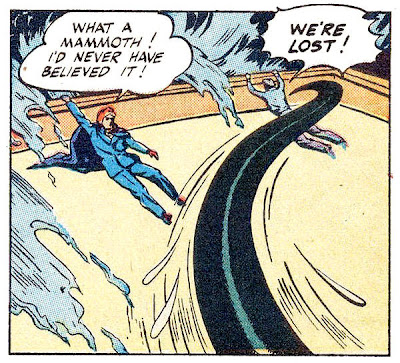 It’s the fourth and last entry for our “What pours out of a Fawcett” theme week, and begins with a question from me: was the Loch Ness monster ever called the Loch Ness dragon? That’s how it’s referred to in this story from Ibis the Invincible #5 (1946). I don’t remember ever hearing it called that.

The story has Ibis involved in a contest between two men who are fighting over a woman, which he intends to see is conducted fair and square. Yet earlier Ibis didn’t feel a bit bad about abruptly ending an afternoon of fishing with his squeeze, Princess Taia, by using his magical powers to have a fish bite on Taia’s hook. I guess fair play in macho doings is one thing, boredom in the middle of a lake with your girlfriend is another. 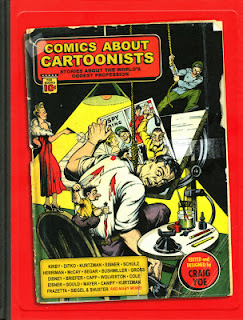 The art on the story is credited to Gus Ricca. It’s the first story I’ve ever shown by Ricca, who had some famous covers, including the one above, which was used for Craig Yoe’s great book, Comics About Cartoonists. As far as I know it’s still available, and you don’t need Ibis’ famous Ibistick to get it. Just wiggle your fingers over your keyboard and type in www.yoebooks.com, which will magically take you to a wonderful place where you get it the old-fashioned way, by buying it. 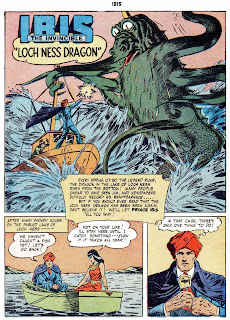 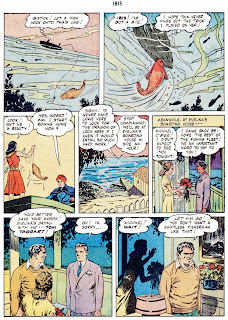 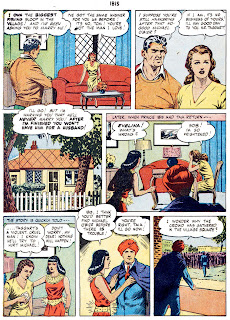 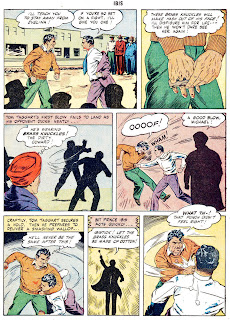 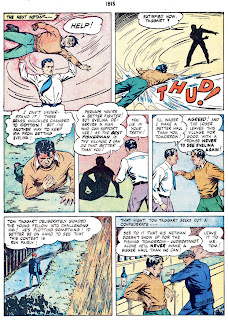 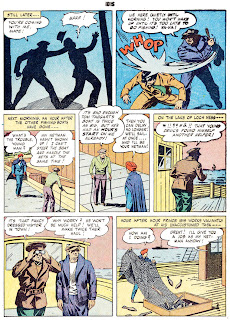 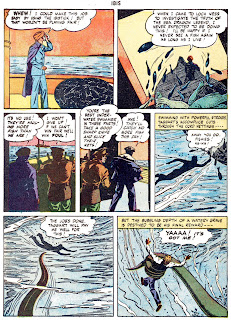 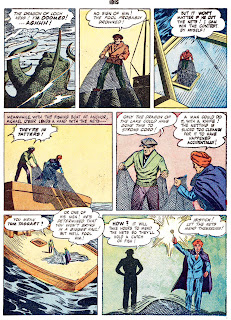 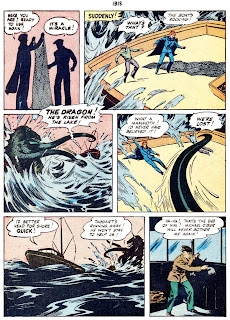 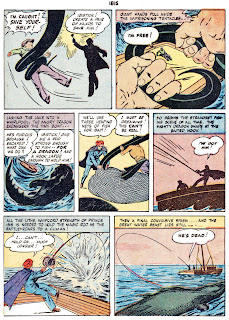 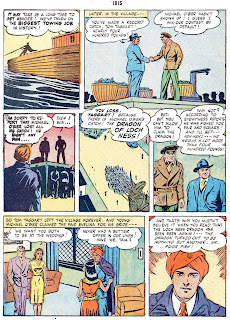 It’s been fun since Number One! 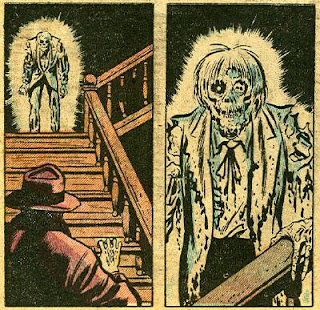 Today is the seventh anniversary of Pappy's Golden Age Comics Blogzine. I usually don’t make anything of this anniversary because every year I usually forget.

You can find old Number One, the first posting from this date in 2006 by clicking on the picture of the stairway corpse above.

I began this blog with the notion that if I could find enough of interest to scan and write about I might do 300 postings. As you can see I’ve done more than 1400, and #1500 will be January 2, 2014, unless, of course, I’m hit by a meteor or otherwise incapacitated.

I want to say how much I’ve appreciated the readers who have stuck with this blog over the years, who have even used it for inspiration to do their own blogs. This is more than a hobby to me. Since 2009 I have had the luxury of retirement from the daily toil of 45 years at various jobs. Now I consider Pappy’s to be my job...and it’s a lot more fun than I’ve had on any other job.

Will I make it another seven years? We’ll take it one post at a time, and hopefully I’ll see you next July 26 on the eighth anniversary.

Pappy, in the early days of its fame, the monster was referred to by several terms, with various sources describing it as a dragon.

It was also referred to at times as a sea serpent and as a monster fish before everyone finally settled on the word, "Monster."

Thanks, Steve...I appreciate your information.

I was glad to see your focus on Fawcett. It is Whiz-Bang days here in Robbinsdale, Minnesota, an annual festival in honor of William Fawcett and Captain Billy's Whiz-Bang. Few comic fans are apprised of this annual celebration, and it would be nice to see more of them.

It's synchronicity that my Fawcett week coincided with Whiz Bang Days, but I'm glad it did. Thanks for letting us know about the celebration for Captain Billy.

Happy Anniversary Pappy! I've been a retentively regular reader ever since the upper two hundreds (my first comment is on post number 290, though I have no way of knowing what the first one I ever read was). I really appreciate this blog, and I look forward to every Monday, Wednesday, Friday, and Sunday (and Thanksgiving Thursday), even if I do sometimes get around to reading them rather later. Thanks for doing it, man.

Cavin, you're one of those longtime readers I am referring to.

If you get around to reading the posts "rather later" then you're probably doing what most people do. It's the way I read other blogs. I'm only obsessive-compulsive with my own blog.

Thanks for the support.