Number 1406: If you can whup her brother, you can be her lover 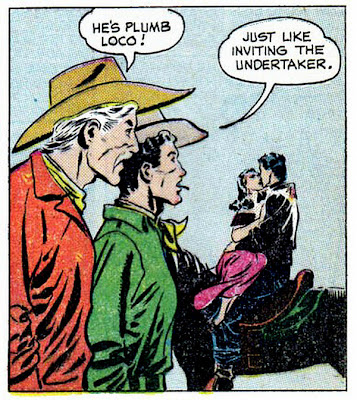 This is day two of our “What pours out of a Fawcett” theme week. I have a love story from Fawcett’s Romantic Western #2 (1950), drawn by Al Williamson and friends.

The story is pretty simple. Gene Lasseter, the hero, has a hankering for a pretty gal with a brother, Marko, who has a problem with guys liking his sister. He beats them up. Señorita Conchita, dark-eyed Latin beauty, seems to approve of that method of weeding out boyfriends. Love triumphs in the end because Lasseter gets the upper hand on Marko. But I’m not sure Lasseter wouldn’t have to fight Marko again at some point in the future. Guys like that who can dish it out don’t take kindly to taking a beating. 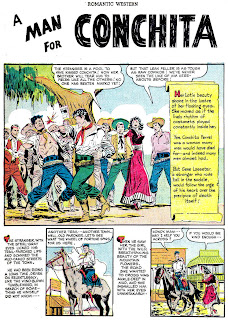 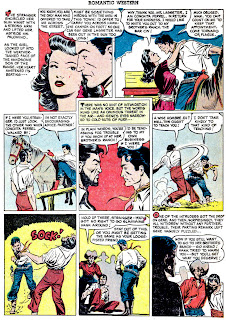 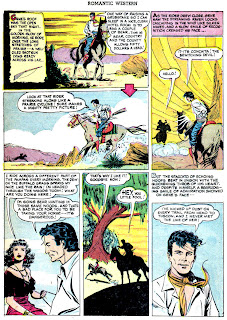 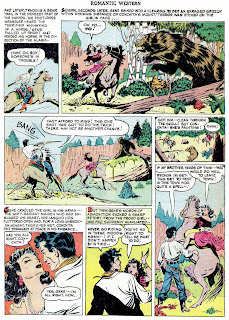 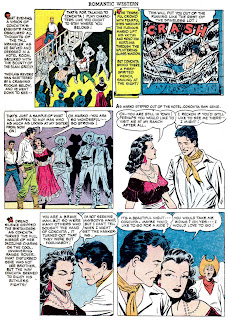 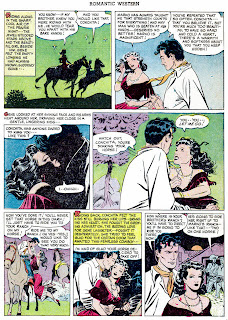 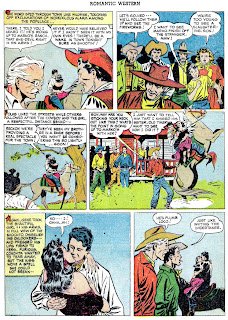 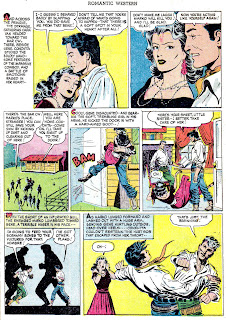 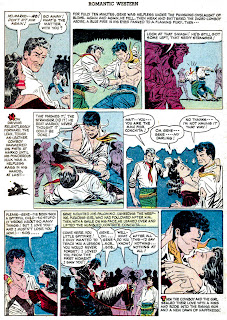 "She moved as if the lively rhythm of castanets played constantly inside her." I think she needs to go see a knee specialist, that sounds like she's got joint problems ...

This one is pretty standard but with beautiful Williamson and a zillion other people art. Everybody in it's an jerk, except the guy gets to keep being a jerk because, gosh darn it, he's the man and he's right.

That's a pretty lousy bear, though, especially for Al and his gang. Looks more like a mountain lion in a bear suit!

Ha-ha, Brian...castanets. You've given a good explanation of why I sound like I do when I get out of bed.

That's to go along with the sound of a rusted gate when I'm finally out of bed and straightening up.

Well, since you brought up bad drawing...how 'bout that red (!!!) cowboy hat, page 7 panel 1. Had I been the editor of this comic I would have had that hat redrawn.

You're right, it looks like a fancy lady's hat from the 50s!

I have to say, we can pick out bad spots in the art, and obviously it was a quick job from the fleagle gang, but if only other people's GOOD jobs were as great as this BAD job.