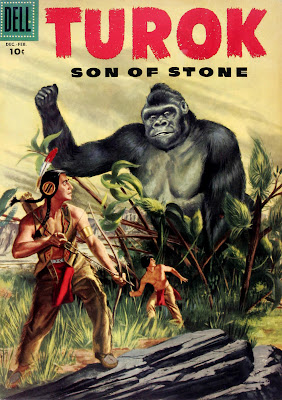 In its original 1950’s version, Turok, Son of Stone, had a simple premise: Turok and Andar, two pre-Columbian Indians in what is now New Mexico, found themselves in a lost world full of dinosaurs and other anachronistic creatures and people, and couldn’t find their way out. I loved this title as a kid and ape fan that I am, I for sure bought this issue with its King Kong-like cover.

In reading it so many years after its publication it I’m struck by symbolism I didn't see as a kid. The giant ape is living on its mesa minding its own business when Turok and Andar lead a tribe there. They displace the ape, which is what will happen to Turok and Andar’s people once the Europeans land on their “lost world” of the American continent. 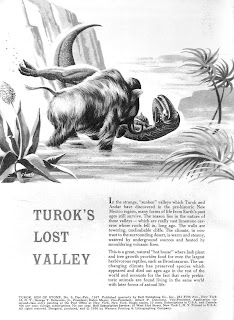 The Grand Comics Database lists the cover artist as Giusto, the writer as Gaylord Dubois, and the artist, pencils and inks, as Bob Correa. From Turok, Son of Stone #6, 1957. 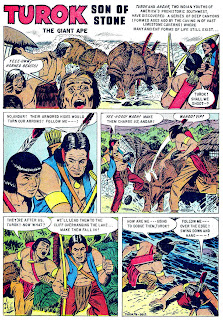 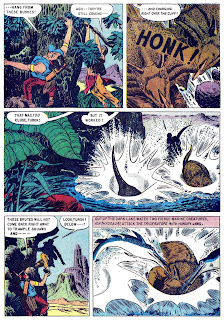 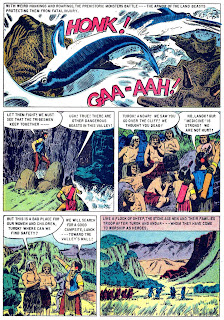 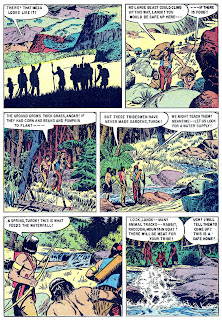 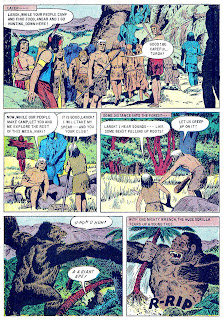 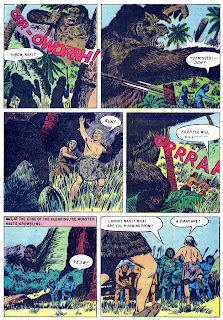 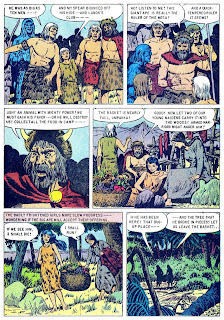 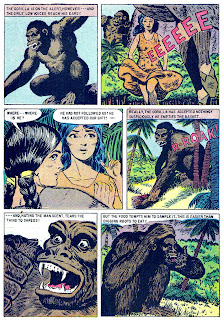 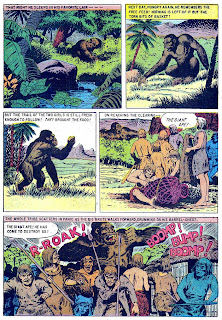 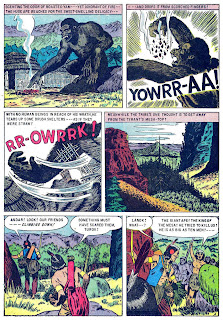 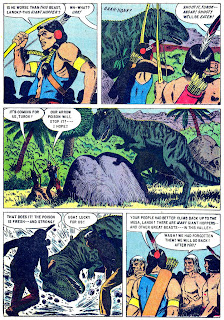 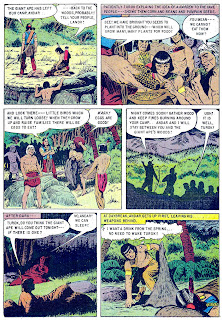 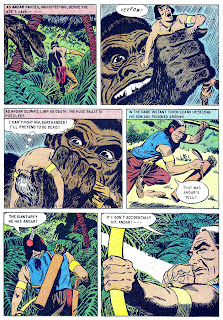 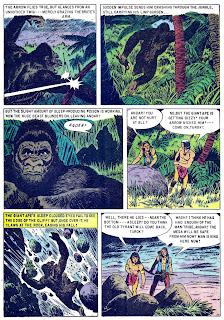 The ending seems Comics Code-style, even though Dell had an internal code and did not knuckle under to the Comics Code Authority like other publishers. Perhaps before the Code was implemented the ape would have been killed, not “asleep” as Turok describes his condition after a big fall.
Posted by Pappy at 12:01 AM

Somebody clearly wanted it toned down. Turok's arrow is completely rubbed out in the penultimate page, and I'd wager the internal organ of your choice that the enormous tree trunk on the final page (which the text hilariously describes as "an unnoticed twig") and the over-large, white zip-n-zap are last-second add-ons to cover the original artwork's arrow sinking deep into the flesh of the ape's arm.

I can see why; intentionally or not, the story evokes much sympathy for the big goof. As you wrote, he's minding his own business when the humans move in on his territory; the fools decide the best course of action is to feed a wild animal; he smashes a basket and some huts, but doesn't harm the women or Andar.

Even the desperate concentration on the distressed ape's face on the last page lends him more humanity than anyone likely meant.

This being the late '50s, it probably came down to a conflict between a writer of the "kill it before it kills you" approach to nature, and an editor with a somewhat more enlightened view.

Billy, you hit it on the head. I appreciate you taking the analysis of a changed (read: censored) ending a step further than I did.

Killing cold-blooded eating machines like dinosaurs in order for humans to survive is different than killing a more human-like ape, and can't help but evoke more sympathy for the plight of the suddenly displaced animal.

Good stuff with even better analyses Pappy. I'm still rooting for the big ape to come on back!