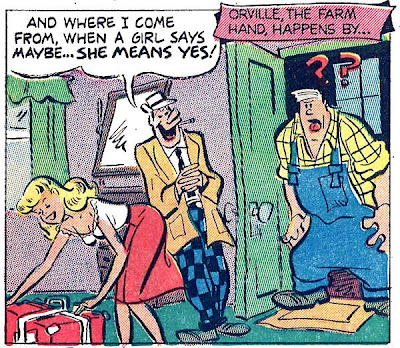 The Farmer's Daughter #1 (1954) is interesting. This story is about the traveling salesman and the farmer’s daughter! Aha. Now we're getting somewhere. It’s published by Stanhall. Its indicia lists Adolphe Barreaux (“Sally the Sleuth” and various crime comic books) as executive editor, and Hal Seeger as editor. Hal Seeger, an animator, went on in the ’60s to create Batfink. A copyright notice in The Farmer's Daughter gives him the copyright for the book.

Paul Spector, in his apparently vacated blog devoted to his father’s work, Spectorphile, credits Irv Spector with writing and art on The Farmer's Daughter. A commenter to that posting said that title character Amy appears to be drawn by Bill Williams, who also did comic books for Stanhall, and later in association with John Stanley.

The head swims. The Farmer's Daughter, despite its racy-sounding premise, Amy's busty, bare-legged and barefoot cuteness, and its cast of very funny characters, was short-lived. It lasted four issues in 1954. Seeger created a couple of other short-lived comics for Stanhall with Oh, Brother, and G.I. Jane, both with art signed by Bill Williams. The comics all ended just about the time the Comics Code was implemented. Had they submitted The Farmer's Daughter to the Code it might not have passed, based on the storyline and dialogue, and one of the best punch lines ever in a mainstream comic book. 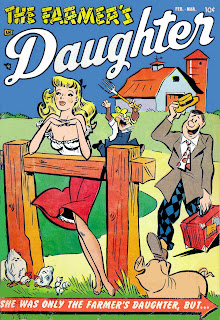 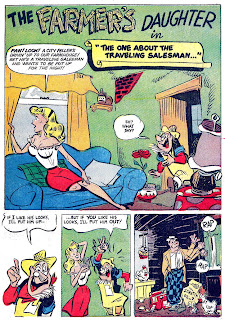 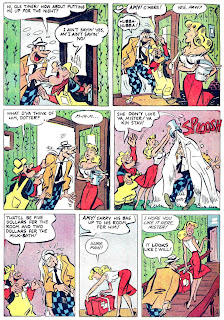 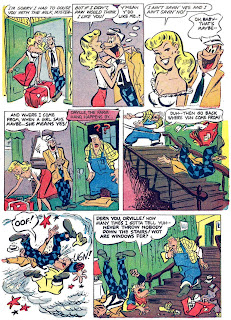 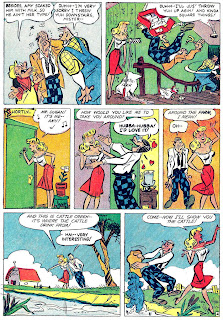 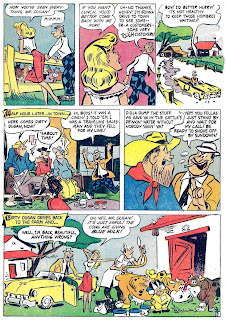 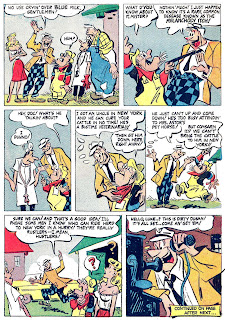 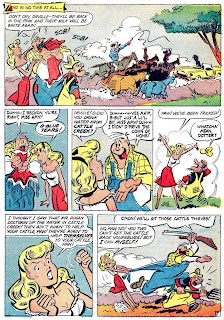 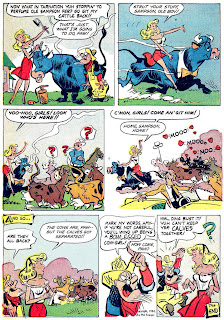 It might have been Wertham that always claimed that comic artists actually drew woman nude and then put the clothes on later.

It's always interesting to see the weird juxtaposed styles like this; I'm not good enough to tell if it's two artists but I've certainly seen single artists who have draw woman more realistic and the men more cartoony.

Brian, I'm familiar enough with both artists that I'm confident the observation that Amy was drawn by Bill Williams is correct.

Haha, awesome! Did you see the ad for this I posted on my blog the other day or something? I find it hard to believe we sync'd up so splendidly again!

Karswell, since I work about two months ahead, I actually posted it in July. You aren't reading my mind again, are you? I had to send my hat out to have the tinfoil lining refurbished. It was getting worn out. It's back on my head again and I dare you to get into my head now, ha-ha!

You should have posted THIS page: