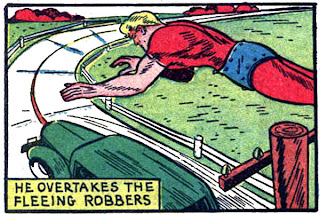 
Monday we had a story set in MLJ Comics' transition period from superheroes to Archie Comics, and today we reach back to MLJ's beginnings.

Steel Sterling, as you'll see in his origin story from said Zip Comics #1, 1940, had a reason for being the Man of Steel. He jumped into a vat of molten steel and came out a superhero. I do not recommend you try this, but in comic books I guess it's as likely an origin as Superman arriving on earth as a baby from Krypton, or Eel O'Brien falling into a vat of chemicals and becoming Plastic Man.

The story is credited by the Grand Comics Database to Abner Sundell, and the artwork to Charles Biro, who later rose to fame (and infamy) by creating Crime Does Not Pay.* 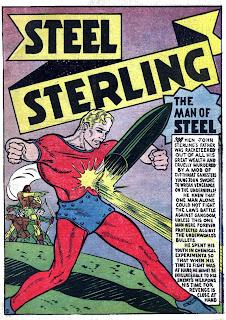 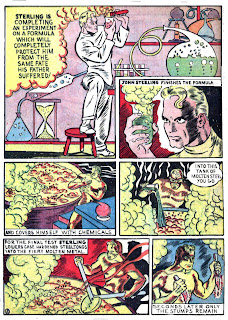 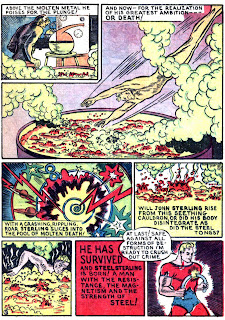 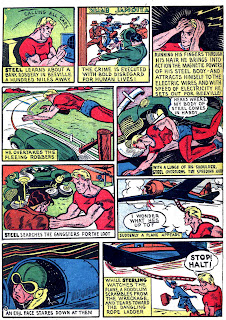 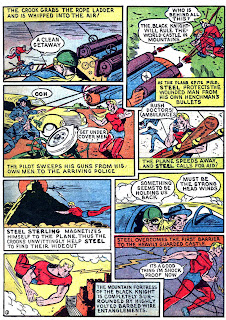 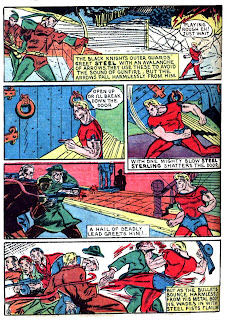 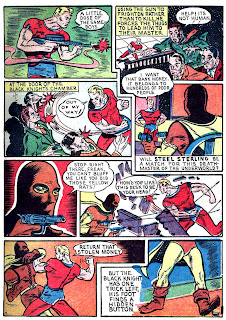 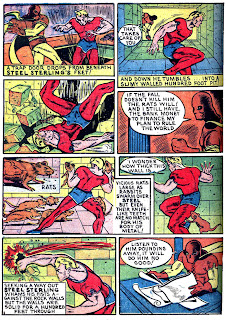 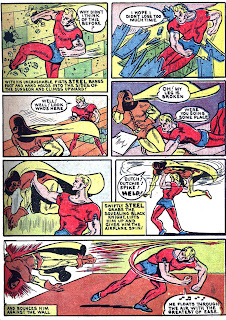 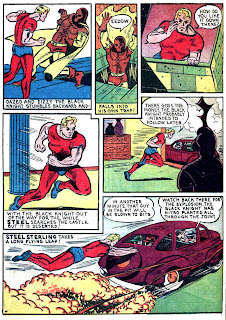 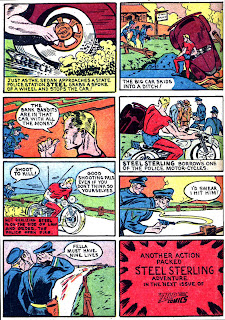 *There is a text story in Zip Comics #1 with art by a young Mort Meskin, author uncredited. It's about the notorious kidnapper/murderer William Edward Hickman, executed in 1928 for a horrible mutilation killing of a child. It reads like something Biro would have used later in Crime Does Not Pay. When reading several online articles about Hickman I saw his victim was twelve years old, not eight as this two-pager says. Nowhere else but in this article did I read anything about Hickman taking a really long time to die on the gallows, while witnesses stood around watching him fight the noose by using his neck muscles. Did that actually happen, or is this some fever dream by a comic book writer? 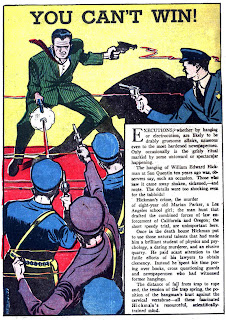 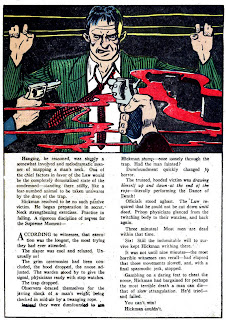 Well, first, hangings don't generally kill by breaking the victim's neck. Rather, when there is a break, it typically renders the victim unconscious, and unable to kick if conscious. With or without the broken neck, the victim strangles.

Hickman's neck wasn't broken, but this wasn't because he schemed to avoid a broken neck. (He wasn't so stupid as to think that his life would be saved by not breaking his neck.) Rather, he began to collapse just before the trap was opened. This lowered his center of gravity, and shortened his effective fall. None-the-less, Hickman lost consciousness fairly quickly. In fact, the whole process was pretty quick.

I think that, in part, the writer here was fantasizing that Hickman, plainly an awful person who had done awful things, had paid a more dire penalty that did the typical murderer.

Thanks for the insight, Daniel. The "article" (more properly, postal-regulated text pages)appears to have been done without any references, as if the writer were just remembering the whole incident from news stories of the time.

I like your idea of him fantasizing Hickman's death as a struggle. It could also be a scenario dreamed up by a tabloid writer at the time of Hickman's execution, remembered by this sloppy writer.

The whole idea of trying to beat the hangman by building up neck muscles is so ludicrous it comes off as an urban legend.

What I find curious is that the accompanying illustration on the second page doesn't SHOW Hickman with the noose around his neck, momentarily defeating death as shocked and perplexed witnesses looked on. Credible or not, such an illustration would have been SO COOL (er...from the point of view of the average adolescent comic book reader of 1940. I'm merely--heh, heh--speculating.) If that story had appeared ten years later, when comic books had truly gone off the rails, I'm sure such a drawing would have been included. Standards must have been a tad higher in those pre-war years.

Kirk, there were critics of comic books even in 1940; not as organized as they got later (when comics went "off the rails" as you aptly put it), but there were some folks who were alarmed by what their kids were bringing home.