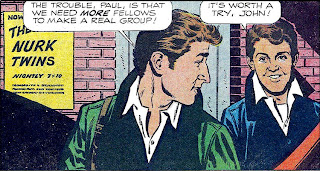 
Counting back—holy cow!—can it really have been 31 years since John Lennon was murdered? I remember that day, December 8, 1980 because like many others of my generation I thought of the Beatles in a very personal way. By having his life cut short Lennon's image forevermore is of a young man, but I always think what might have been, what he would have been capable of musically had he lived.

In 1964 my brother and I were just the right age to become Beatles fans, just as caught up in Beatlemania as everyone else. When this Dell Giant Comic with the Beatles story came out we pounced on it, read every word. Even then I saw it as something of a whitewash; I'd seen the pictures of the Beatles in Germany wearing leather jackets and greasy pompadours, so they weren't as simon-pure as the comic book showed. I liked it anyway. After all, Joe Sinnott was one of my favorite Marvel Comics artists, who did such beautiful work with Jack Kirby's pencils. I'd seen many jobs by Joe as a solo artist, and thought he was perfect for this comic.

Joe's professionalism comes out in every panel, whether he traced publicity photos or not. I don't remember if pictures of John's wife, Cynthia, were available at the time, but in the comic book version she looks a bit generic.* 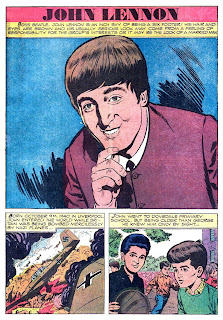 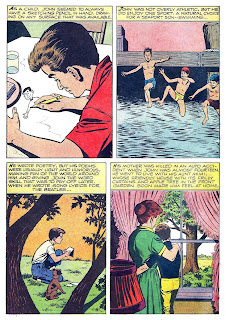 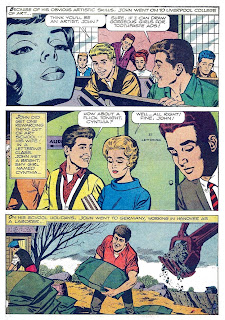 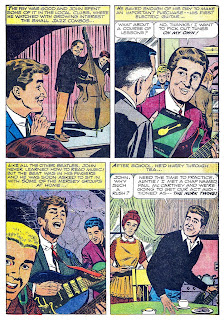 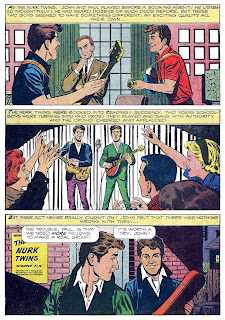 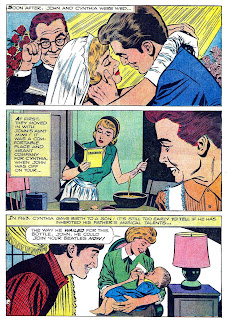 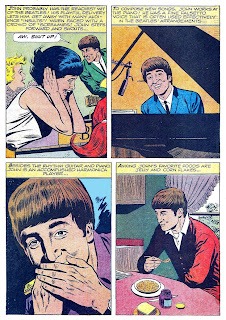 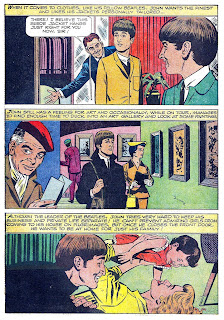 *I got a laugh out of the panel on page 3, "How about a flick tonight, Cynthia?" Comic books usually avoided the use of the word flick because the "L" and "I" could be run together to make a "U". Even in 1964 my mind provided that word in that panel. Ho-ho.
Posted by Pappy at 12:07 AM

With the killing of John Lennon, by a mentally ill young man, the world was robbed of one of our greatest, most original artists. He was doing some of his best work when he was suddenly murdered, but, thankfully left a great body of work behind. There is no question that the loss to the world of the music John Lennon would have produced in the last 30 years is incalculable and unknowable and will never be heard. It's almost too painful to think about. On a happier note, cartoonist Joe Sinnott is alive and well and enjoying life. He once told me that he always considered "every part of the picture" (in the panel) as important". He's one of our greatest living comic artists. Long live Joe Sinnott!!

Thanks, Rick. I'm glad to hear that Joe S. is doing well, and it was that attention to "every part of the picture" that makes his work so dynamic and pleasing.

On a lighter note, the "flick" joke is hilarious. Man those comics guys were sly. I love how they even manage to label the panel "lettering," as if these kids are emerging from the very course that taught them exactly how to use this clever code.

What a great find. Something about this sweet, nostalgic look at Lennon made me nearly tear up! (it must be the season).

Fascinating tidbit from Rick - every part of the panel important - about Sinnott. It seemed his work always had incredible balance and symetry - as you say, Pap: "dynamic and pleasing." Now I know why - Thanks, Rick!

Rick, thanks for updating us about Joe. (Good to see some of his non-Marvel work.) And I enjoyed your work on the "Beavis & Butt-head" comic. (Yes, I admit I had nearly all the issues!)

I had this comic when I was a kid; I haven't seen it since but it has stuck with me all these years...it shows how good Joe is on his own, as can also be seen in his Treasure Chest stories. Thanks for the blast from the past, Pappy.