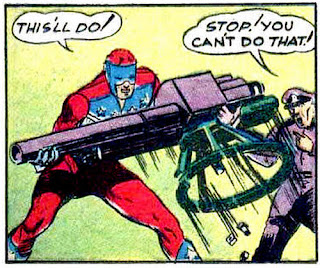 
Pep Comics #4, 1940, tells the story of an attack on Pearl Harbor, almost two years before the attack by the Japanese, 70 years ago today.

The story is not that that surprising or even prophetic fiction. It was common knowledge at the time that Pearl Harbor, where the U.S. Pacific Fleet was stationed, was a likely enemy target. The Shield, America's first patriotic hero, kicks some butt. The fictitious Musconians are standing in for countries with which we were not yet at war.

Irving Novick drew the story, and Harry Shorten wrote it. The story features a crossover with the Wizard and Keith Kornell, the West Point cadet. As we learn at the end of the Shield's engagement with the Mosconian enemy, the Wizard and Kornell would be picking up the fight in the "current issue of Top-Notch Comics." I can figure out the ending of the saga without seeing it, but maybe the crossover worked in 1940 to separate some kids from their dimes. 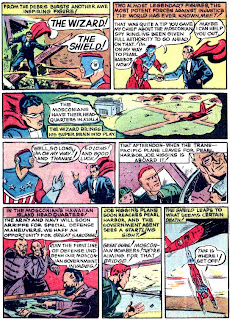 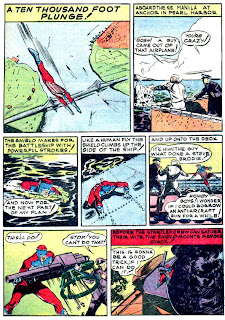 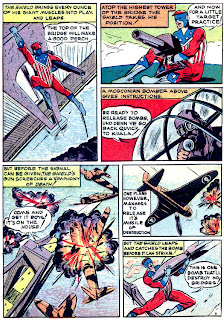 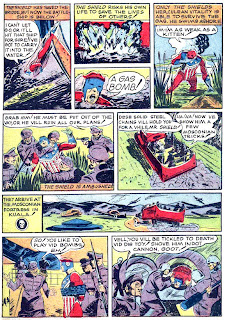 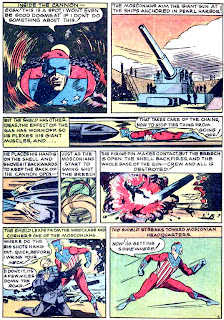 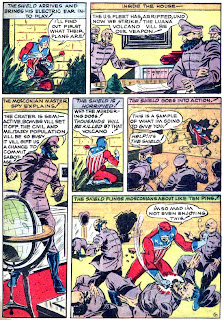 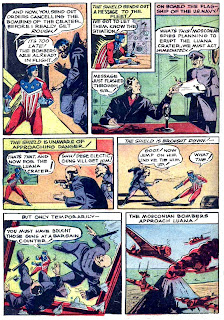 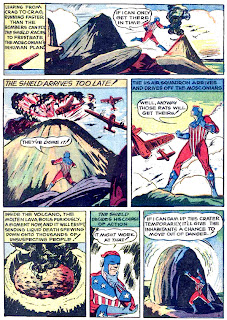 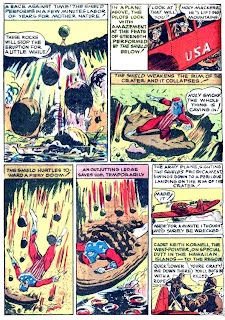 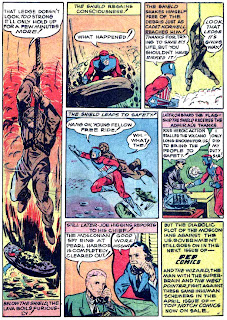 The panel on page three showing a sailor identifying the Shield as "the guy what done a Steve Brodie!" threw me. Steve Brodie is the name of an inker for DC, whose work has shown up in four Boy Commandos stories on this blog. I did some research. The Steve Brodie referred to in the Pep Comics story was a daredevil who claimed to have jumped off the Brooklyn Bridge (and lived) in 1885. He died in 1901. You can read about that Steve Brodie here.
Posted by Pappy at 12:25 AM

"Moscovian"? If they derived that word from where I think they derived it, this just may have been the first Cold War comic, before there even was a Cold War!

Kirk, good catch there...Moscovian does have a familiar ring to it. Thanks for pointing it out.

Surprised you didn't know what a "Brodie" was. I remember hearing it all the time in old movies growing up in the sixties. Off the top of my head, I remember it from a Bowery Boys film and, I think, TARZAN 'S NEW YORK ADVENTURE!

In retrospect, after dusting off my memory banks, I remember hearing the term "doing a brodie," when I was in high school, but as I recall in my hometown it (mistakenly) meant spinning a car deliberately on an icy road (also known as doing a doughnut).

I also saw Tarzan's New York Adventure but jeezus, Steve, it was over 40 years ago...I can't blow enough dust off my memory banks to make me remember the term used in that movie.

I recall Steve Brodie from the cartoon "Bowery Bugs," where Bugs Bunny claimed he was the one who got Steve to jump from the Brooklyn Bridge (just as Bugs was selling the bridge to the person he told the story to).
"Mosconian" ... I guess their national sport is pool....