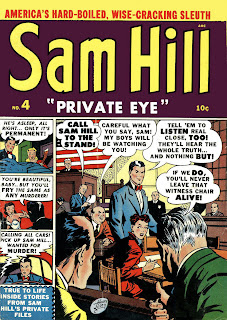 
Harry Lucey was one of the best Archie artists. While Bob Montana was THE artist of the Archie newspaper comic strip, Lucey was the main artist for years on the comic books. He could tell a lot with an expression or a pose.

Sam Hill, Private Eye was another short-lived attempt by the publishers of Archie to supplement their teenage line with other comic book fare. Sam Hill lasted for seven issues in 1950-51, which is about par for Archie. Other comics, such as The Dover Boys, which I showed in Pappy's #870, also drawn by Lucey, had an even shorter run, only two issues. Since this issue of Sam Hill is the only one I have I can't tell you if it's typical of the series, but there really isn't anything in this comic, except for Harry Lucey's artwork, which makes it stand out for me from the run-of-the-mill private eye stories in popular fiction, comic books, radio or television.

Sam Hill seems especially tame when compared to Lucey's earlier work. Consider this Hangman story from Pappy's #572 or the first story in the first issue of Crime Does Not Pay in Pappy's #786. 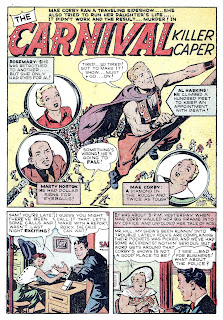 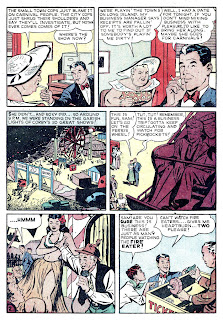 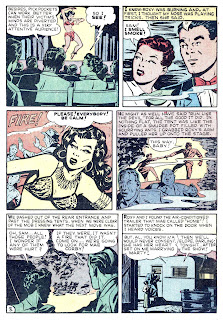 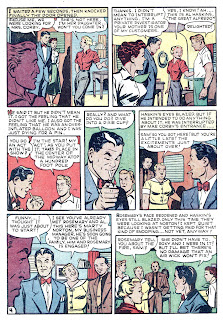 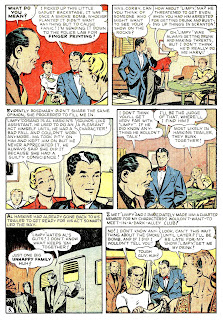 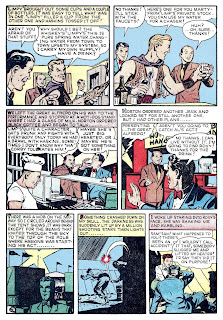 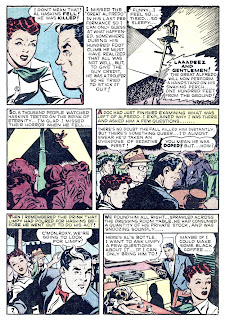 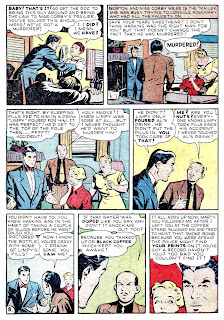 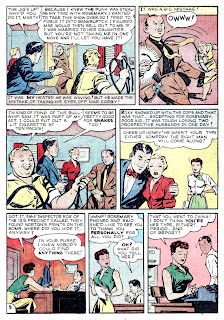 Hill must be tough to be able to wear a bright red bow tie day and night. Anyway, it's interesting that comics in the 1940s and early 1950s were always being accused of being illiterate or sub-literate or something that was bad for literacy. However, look at some of the pages of "Sam Hill". You have to read the captions and speech balloons to follow the story. And there are more words on some of those pages than you'll find in 3 entire issues of most current comics.

It reads almost like a comics version of the Sam Spade radio show: "caper" in the title, Sam dictating the case to his secretary, etc.

rnigma, I haven't heard any Sam Spade episodes, but there was a template for this type of story that came out of radio, movies, pulps, etc., which is why I said it didn't show me anything new.

citizenkanne, your take on the dialogue and captions is well made.

I also like your observations of the fashion statements in old comic books. Guys wore suits, ties and hats. I think it's cool, the way of that era, spiffing up to face the world by putting on a bow tie and shined shoes.

It was the world of my father, who wore that "uniform" to work every day of his life.

citizenkanne— In her research for her MA in education in the '70s, my mother looked into using comic books for remedial reading. She discovered that they were unsuitable because they demanded too much proficiency.

I completely agree with Pappy that this story conforms to a preëxisting template, adding nothing new. In fact, the cover epithet “America's Hard-Boild, Wise-Cracking Sleuth” is absurd in-so-far as American fiction is awash in hard-boiled, wise-cracking sleuths. But I have seen an awful lot of stuff that tries and fails to conform to that template (as is probably also true in Pappy's experience).

I laughed at one bit of dialogue in this story: “In your purse. I new nobody could find anything there!”

Lucey is obviously yet another artist who really wanted to draw women.