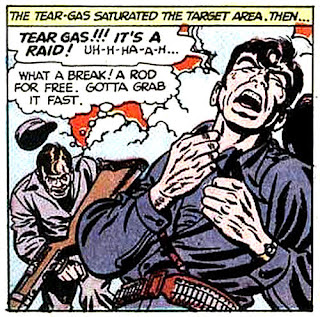 Number 827
Straight to the electric chair
I was taught in Sunday School that "being disobedient will lead you right down the path to the electric chair." Jeez, gimme a break. I'm a Sunday School dropout and I'm still waiting for my date with Ol' Sparky.
Dan Barry draws this tale of a guy who was so bad he didn't even make it to the chair. He got killed by cops, but his pals got the hot squat. It's from Gang Busters #4 in 1948. The last time we saw a story by Dan Barry it was from Strange Adventures #3 in Pappy's #785. Barry, in my opinion, was one of the top illustrators of that period, spreading his artwork amongst several publishers before landing a job with Burne Hogarth on the Tarzan syndicated comic strip, and then on to Flash Gordon. 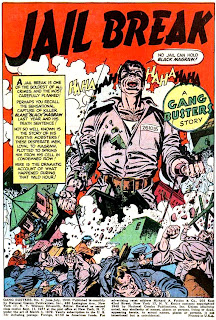 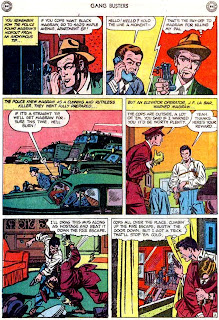 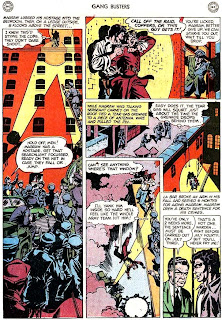 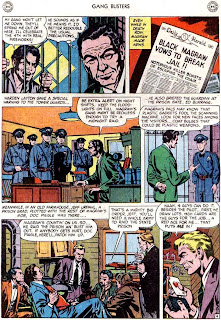 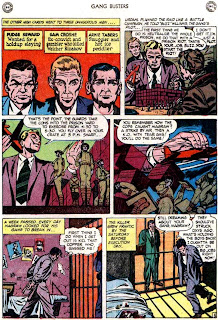 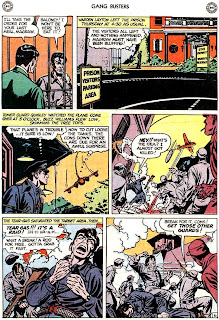 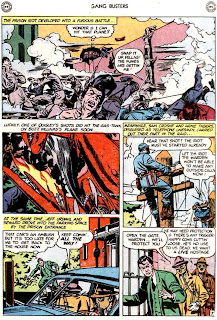 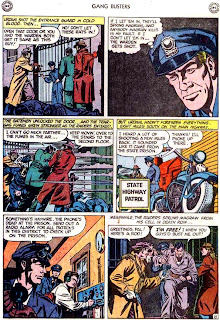 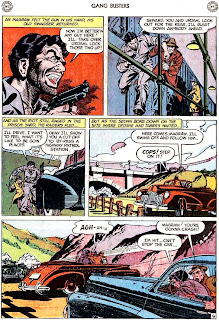 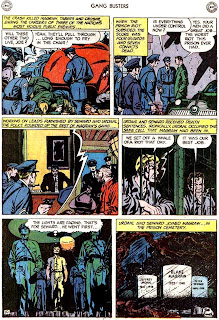 *************
Something I find really entertaining about DC Comics of that era is the advertising. Lots of ads were done in a comics format, which seems only natural to get the attention of comic book readers. I don't know any of the artists except for C.C. Beck on Captain Tootsie. First up is Old Nick, getting a bullet through his Old Nick chocolate bar. I thought Old Nick was a euphemism for the devil, Satan, and maybe this Old Nick could be "that" Old Nick. He's got a beard and perhaps his hat is covering his horns. I've never seen an Old Nick candy bar in my part of the country. Are Old Nick candy bars still being made? 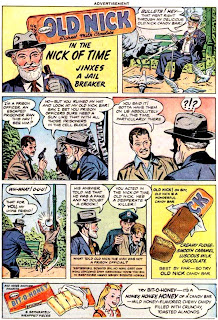 The P-F Flyers ad fits right into a crime comic book, with boys being the heroes, catching the crooks. Gotta be the shoes. 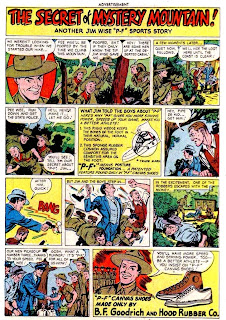 The Ray-O-Vac ad with its moody coloring is graphically striking. 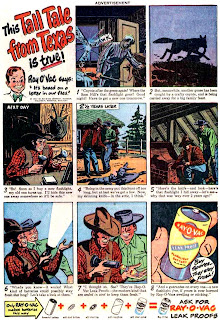 What would a comic book--or magazine of any kind--be without an ad featuring a sports figure? In this case Bob Feller, one of the greatest pitchers of all time, hanging with Popsicle Pete. 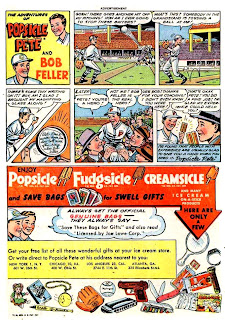 Oboy! A gorilla! I love gorillas. Probably not if they're chasing me, but in comics they're great. John Wayne's no gorilla, but he sneaks into the last panel with a pitch for RC Cola. 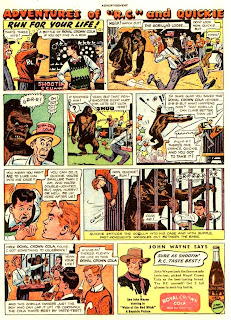 C. C. Beck, who made his fame drawing Captain Marvel, was equally well known for his Captain Tootsie ads, which were everywhere. He was able to sign the ads, which is probably when a lot of kids made the connection between the artist's name and Captain Marvel. 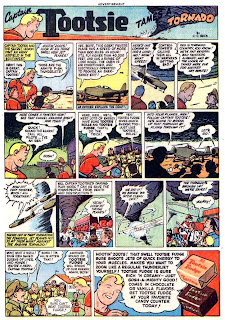 I showed a bunch of entertaining Dubble Bubble ads in Pappy's #634. Bazooka Joe's strips don't rise to the level of Pud and his gang, but like Pud's group, B.J. rises by defying the laws of physics with his flying bubble. 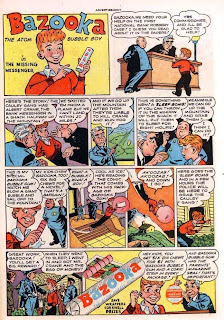 "U.S." Royal gets on his two-wheeler and catches the crazy man! Don't expect any sympathy for the mentally ill in this strip. Maybe a followup could be "U.S." hooking his bicycle up to the electoshock therapy generator so they can zap the poor "lunatic". That would be entertaining for the kids of 1948! 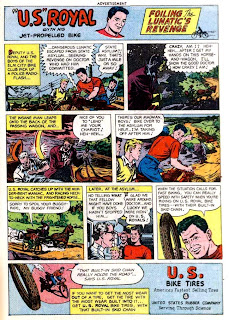 Arrrrgh. I don't know Ray Weir but I hate him. "Most Popular Boy." Let me put my Thom McAn dead in Ray Weir's popular posterior. 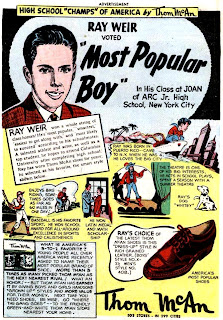 Finally, a DC house ad I find attractive. It has a nice cartoony Shelly Mayer touch to it. 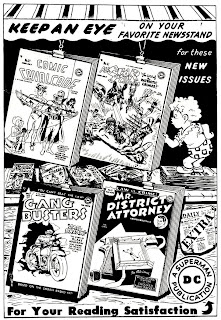 Old Nick was manufactured by the Schutter-Johnson Co (later Schutters Candy Co) of Chicago IL. From http://www.candyblog.net/blog/item/bit_o_honey/: "In the 1960s Schutter’s sold out to the Chunky folks who discontinued the Old Nick citing that it competed with their much more popular Oh Henry! Then in 1984 Nestle bought Chunky and the now orphaned Bit-O-Honey. (There may have been some intermediate companies in there for a while too, candy history is mighty confusing!)"
Hope this helps,
Darci
P.S. http://www.americanheritage.com/articles/magazine/ah/1986/6/1986_6_74.shtml lists: " If there was a classic recipe, it was the nut roll, made with a fudge center, caramel, peanuts, and an outer coating of chocolate. Baby Ruth, Oh Henry!, Love Nest, Old Nick, and Chicken Dinner all were popular nut rolls."

Darci, wow! Thanks for the information!

I missed out on Old Nick, Love Nest and Chicken Dinner, all three candy bars I have never seen.