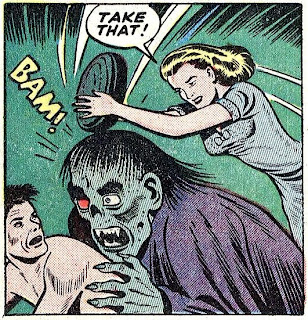 Number 819
The Living Ghost!
Following up a Smokey Stover posting is a daunting task. What could be as crazy as Smokey? Well, this comes close.
"The Living Ghost" is from Adventures Into the Unknown #1, 1948. It was written in an apparent fit of delirium by Frank Belknap Long, Weird Tales writer, and one-time pal of H. P. Lovecraft. Long wrote all the stories in this issue, as well as #2. After that, and for the next few years there are a lot of screwball stories that read something like "The Living Ghost" in the ACG supernatural comics, but I don't know if they were by Long. As we've mentioned in this blog a time or two, many writers worked in the comic book field for extra $$$. It would seem a natural--or in Long's case, a supernatural, yuk-yuk--way to supplement his income.
It's drawn by Fred Guardineer, who lent his exacting drafting style to a most unlikely subject. His artwork, which seems so wrong for horror, produced one of the greatest horror comics pages ever, page 8. I'm not sure if Guardineer ever drew another horror story; this is the first of two Living Ghost stories (the second is found in issue #2), but the only one he drew. His precise drawing style worked better in crime comics, and even the Westerns he drew in the 1950s.
Guardineer quit comics in the mid-'50s and went to work for the Post Office. Long went on to a long and productive writing career. 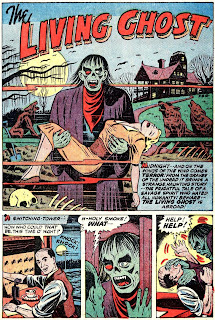 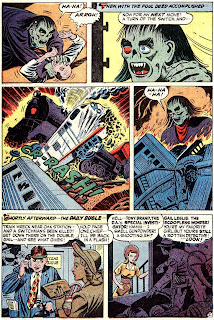 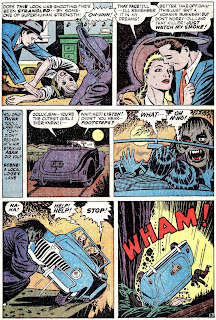 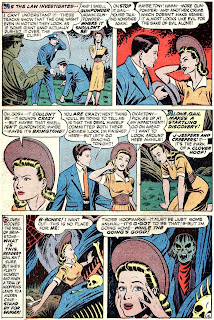 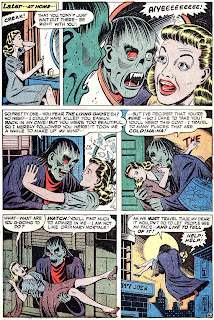 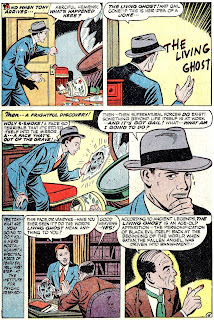 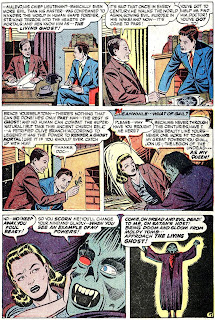 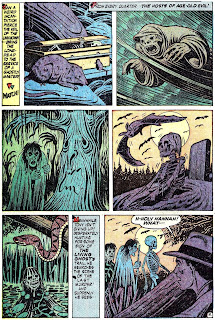 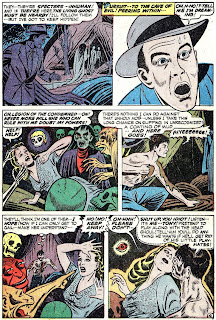 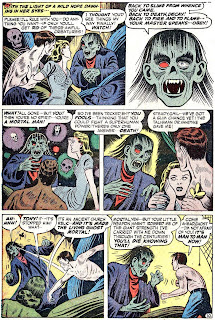 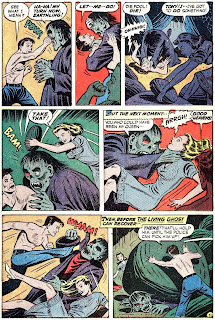 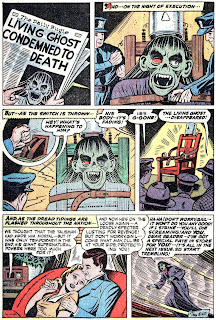 man, that was jaw-dropper! to say i'm impressed would be an understatement!...

Haha, awesome... I've been trying to snag a copy of this issue for years, yer lucky to have it Paps!

That is just a fun story!1 I never knew that this talented guy went to work for the government delivering mail.

Chuck, while working as a postal employee, Guardineer also drew a weekly nature panel for his hometown newspaper in upstate New York.

Cheers for posting the entire "Living Ghost" story from the first ish of AITU, Pappy! I've only got B&W of the entire issue.

I revealed that Frank Belknap Long wrote the entire contents of the first AITU in the Necronomicon Press mag Other Dimensions in 1995, and the article was slightly updated for The Scream Factory in 1997. I've made the latter available both on the Official Frank Belknap Long FB profile and Worlds of Weird. A mind-blowing discovery I made while reading Long's letters to August Derleth. I ventured out to Fairleigh Dickinson University Library to see Richard Hughes' papers, but alas, all I turned up was FBL's name (along with Edmond Hamilton and the Binder bros) in his address book.

Fantastic!
And what a great article on Long in Worlds of Weird P, thanks.