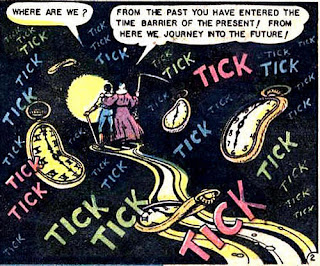 
Considering that I think Lou Cameron is one of the top comic artists of the early to mid-1950s, it's surprising I haven't featured anything by him before. You might not be surprised, but I am.

Cameron was not only a top comics artist, he signed his work, which has intrinsic value to me. I think if a guy drew it he should sign it. Even some of the best comic book artists never signed their work. Like the other artists who put their name on a strip Cameron was saying, "Here it is. I'm taking credit for it, bad or good." In his case, it was always good. But as good as he was at some point he kicked over his drawing board and replaced it with a typewriter. He became a popular paperback book writer.

This is a nifty little tale of time for Baffling Mysteries #18. I especially like the touch with the Dali-esque soft watches. 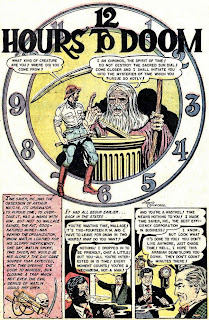 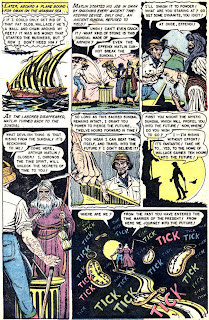 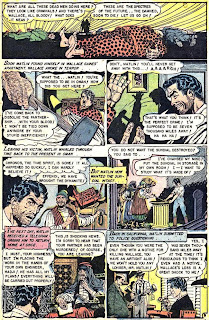 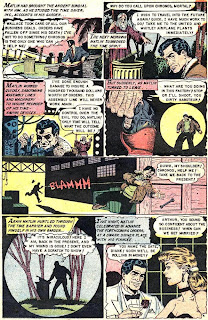 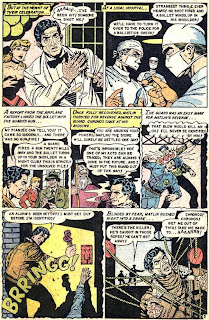 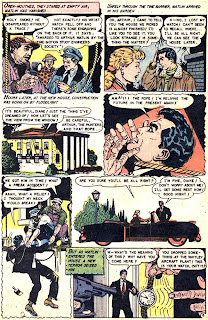 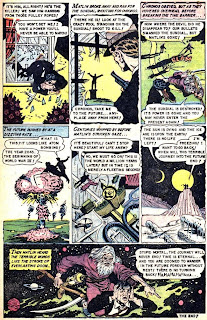 Great post Pap, and great issue too! You know I love the Cameron...

I agree with Karswell.

Lots to like about this one. Love the image of Chronos riding on the back of killer in the last panel.

So he gets paid to travel to foreign lands and smash sundials with a sledgehammer? Interesting. Does it pay well?

Concerning the nice splash panel on page one:
If you ever encounter a large man with a beard beckoning you to come near so you can be initiated, while he holds up a large boney finger, DON'T YOU DO IT! That's exactly how my doctor tries to give me a prostate exam...

Hey, Apocolyte...you may not know this, but that finger can save your life! I'm a one year survivor of prostate cancer.

It's not a bad idea, men, to get checked. Ask Dennis Hopper, who is terminal from prostate cancer.