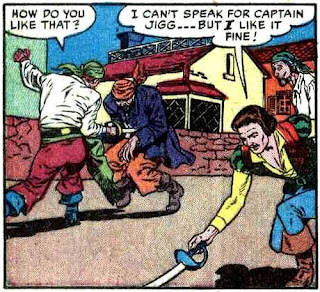 Reed Crandall and the speed lines


I've been looking at Reed Crandall's artwork for over five decades, and for me it's instantly recognizable by the action poses he drew. Sometimes the characters look to be in suspended animation or a diorama. Comparing any other artist to Jack Kirby is unfair, because hardly anyone ever rose to his level of action art, but while Kirby's characters seem to be in a blur of motion, frozen at an instant as if by a high speed camera, Crandall's characters often appear as if they have just struck a pose for the artist. 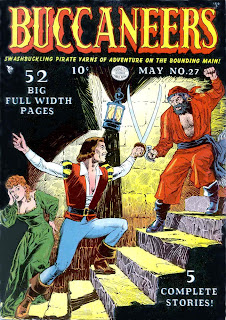 I'm not knocking Crandall...it's his artistic style, and as evidenced by this excellent 1951 Captain Daring strip from Quality's Buccaneers #27, he drew everything very well. Taking on a strip about pirates would involve researching clothing styles, ships, cities and places of the early 18th Century, and would be a lot more work than drawing a routine private eye strip like Ken Shannon, and probably for the same page rate.

Crandall didn't use the comic artist's conventional speed lines. When most artists showed a punch being thrown, pen lines would be drawn to show where the fist started its arc, with a big starburst at the point of impact.* 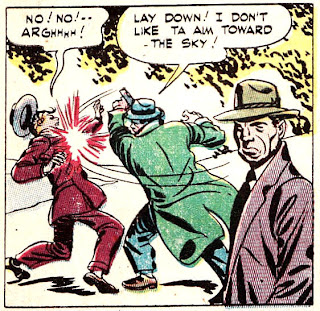 Artists drew that way for so long that they and their readers accepted it as part of comics' visual shorthand. Crandall reserved the speed lines for panels where he had no other way to explain the action. Page 6 of this story has a couple of examples, where Crandall used the lines to show the arcs of the sabers in order to explain the results of their swings.

Action poses are a great tell when looking for a particular artist's style. 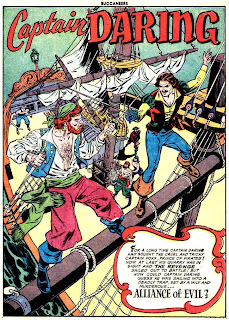 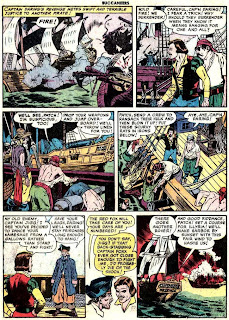 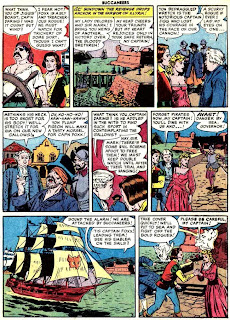 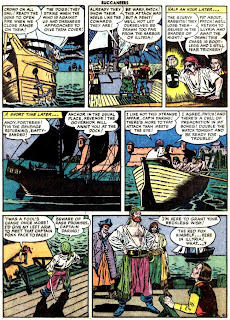 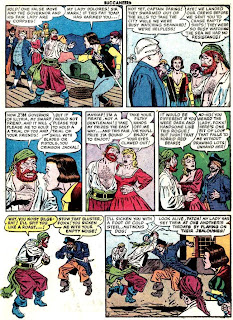 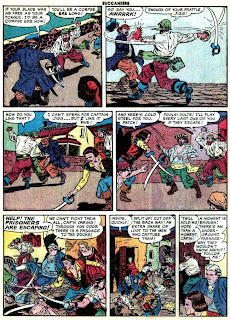 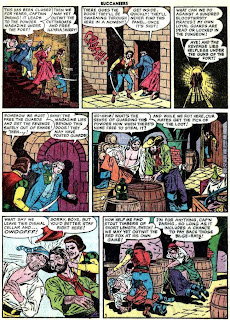 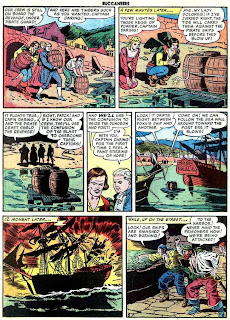 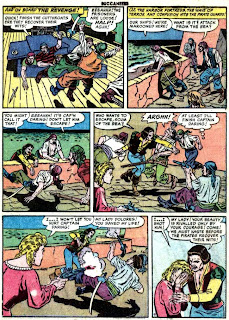 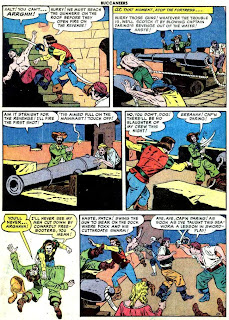 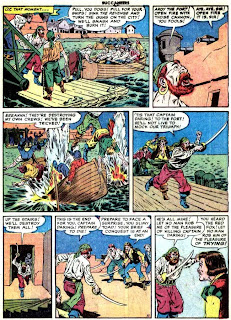 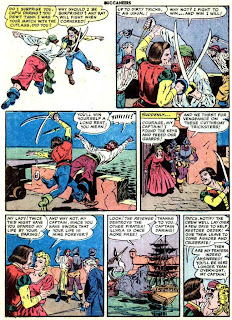 *In early Kirby Captain America strips the head would sometimes be replaced by that starburst, to show an especially brutal impact.

Pappy: Great observation about Crandall's "posed" figures and great discussion of speed lines (I hadn't thought of that!). And, like you, I'm not knocking Crandall. I love Crandall. Part of the appeal for Crandall for me is his formal style. OK, having said that . . .

I wonder if the posed look might owe something as well to how extensively Crandall and that whole EC gang (Torres, Frazetta, Williamson, etc.) used photo reference. Those guys always took a ton of pictures of themselves with rifles, swords, etc - always in posed posture intended to emulate action. I don't know much about Kirby's process for figure drawing. -- Mykal

I think Kirby's figure drawing process was to visualize a scene in his head and put pencil to paper; I'm sure he had a morgue, like all artists, but he drew so many thousands of those panels I don't think he needed to really think much about it. Perhaps his early background as an inbetweener on Popeye cartoons might have prepared him for the stretch and smash action panels of comic books...?