Number 2135: The High Moderator vs the Mad Imperator 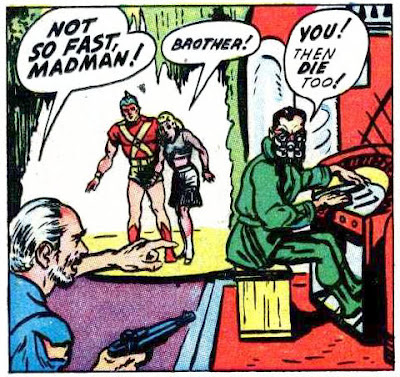 
“Ultra-Man: 1939,  All-American Comics #8. When Gary Concord loses his parents in WWI, he vows to wipe out war. By 1950, he has created a chemical that is so powerful it would frighten mankind to peace. However, another war breaks out and in a bombing raid in the U.S., his lab is blown up and Gary is chemically thrust into suspended animation. He wakes in 2174 to a world engulfed in war. Gary has undergone a transformation as well, taller than most men and superior strength. He uses his knowledge and new talents to bring about peace. His son, Gary Jr., inherits his father's stature and strength, becomes caretaker of his father's formula and continues the fight for peace as Ultra-Man.”

I like that Gary is the High Moderator of the United States of North America, which is a distinguished title. The villain of the tale is Tor, who also has a title, the Mad Imperator. If nothing else, the writer-artist, Jon L. Blummer, gets thumbs up from me for such important sounding offices, even if one is “Mad.”

“The Miasma of Death!” — something of a stinker of a tale, ho-ho — is from All-American Comics #14 (1940). and is credited with writing, penciling and inking by Jon L. Blummer. All-American Comics was the flagship title from publisher Maxwell Gaines, future publisher of EC Comics, and father of William M. Gaines, who went on to publish Mad comics and magazine. The editor of All-American was Sheldon Mayer, who was in his early twenties at the time, but already an accomplished cartoonist (“Scribbly”) and future creator/artist of the long-running Sugar and Spike comic book for DC 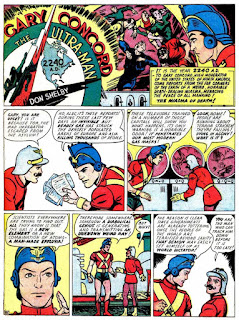 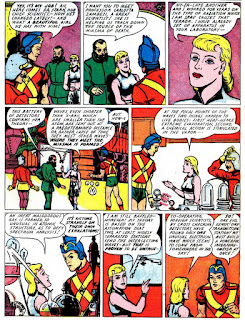 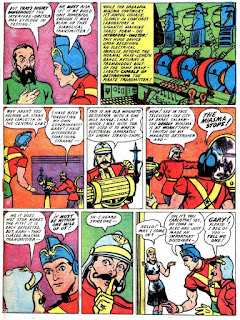 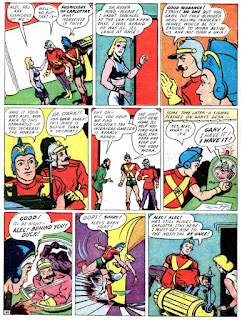 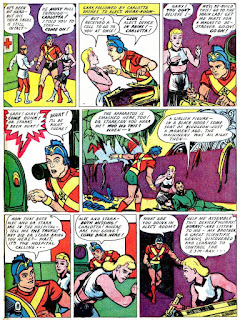 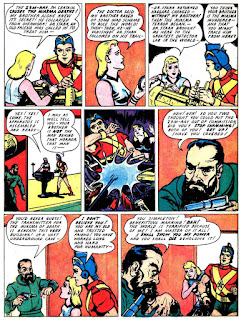 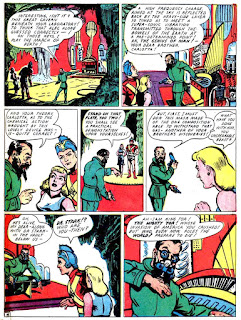 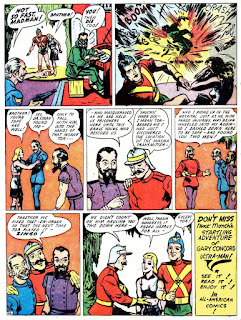 This particular story has Alec provide the real solution, but has many of his important acts effected off-stage and not even foreshadowed. We just learn at the end what he did, so the resolution is rather like deus ex machina. And he seems to have sought dramatic effect rather than simplicity.

It's interesting how often ostensibly benign scientists in works of popular fiction create things with no apparent use other than for large-scale death and destruction. In reality, science is often a double-edge sword; but these fictional swords seem only to cut one way, and not a good one.

There truly are interferometers. One was used in the Michelson-Morley experiment, which tried to identify the movement of the Earth relative to a luminiferous æther, but found no such motion. This empirical result led to the development of what are known as “Lorentz-Fitzgerald transformations”, which later emerged as a theoretical result of the Special Theory of Relativity. And, apparently by chance-coïncidence, the most recent episode of XKCD constructs a joke by willful misapplication of the theory of interferometry (which applies to waves and not directly and usefully to dogs).

Daniel, in Flash Gordon Dr Zarkov was a Scientist, which meant that, like the Professor on Gilligan's Island, he had knowledge of all sorts of arcane things. I know scientists are usually pretty smart in their field, but just because a scientist can split an atom it doesn't mean he can do everything "scientific."

And as I've mentioned before (try not to yawn while I'm talking to you), if not for Buck Rogers there probably would not have been Flash Gordon, and without Flash there might not have been superhero comics, because then where would artists get their swipes? Prince Valiant and Tarzan, for sure, but Flash Gordon had cool rocket ships.

Thanks for the link to XKCD. Interesting and funny comic strip.

I have to confess, I suspected Carlotta was Tor's sister.