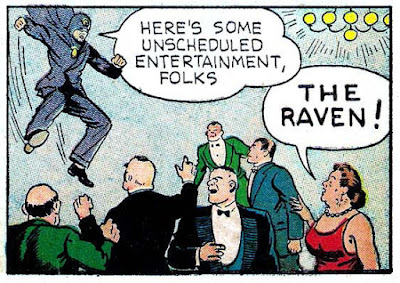 The Raven is a modern day Robin Hood. Modern in 1941, that is. He robs the bad guys and gives to the needy. Far from being simple there are moral issues. The Raven is the disguise of Police Detective Sergeant Danny Dartin. In cahoots with Danny in his sub rosa activities as a masked robber are his assistant, Mike, and Lola Lash, the daughter of the Police Chief.  The Raven, as Danny, has sworn to uphold the law, yet he is breaking it. And robbing the rich to give to the poor is a bit complicated. For instance, to begin this episode, from Lightning Comics, Vol. 2 No. 2 (1941), the Raven drops in (literally, see above) on an upscale soiree and robs Mamma Ravel, “the biggest jewel thief in the country.” While his actions seem honorable, taking the jewels from Mamma and giving them to the poor, what about the people from whom Mamma stole the jewels? They were probably reimbursed for their losses by their insurance companies, another link in the dubious morality of the Raven’s actions.

Then the Raven goes up against another robber gang, the Green Hoods, who hijack the loot he so self-righteously stole, just perpetuating the cycle. It’s no wonder this stuff gives me a headache.

The Grand Comics Database does not guess who wrote or drew this tale. 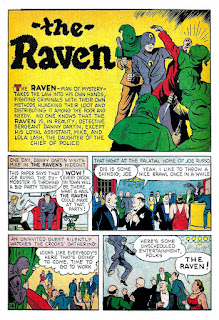 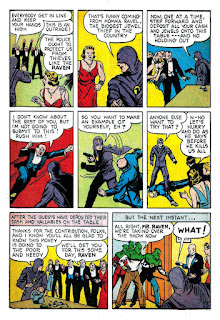 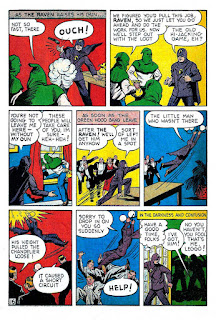 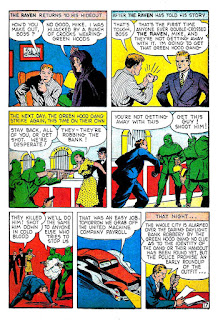 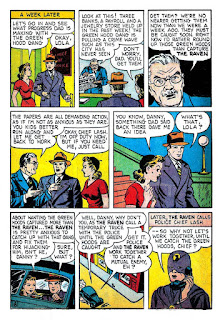 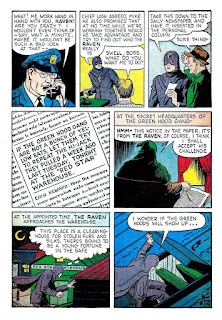 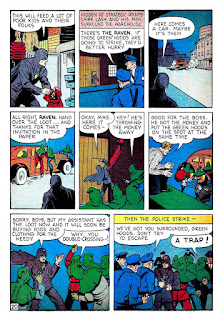 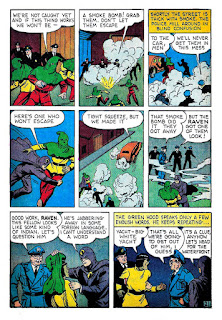 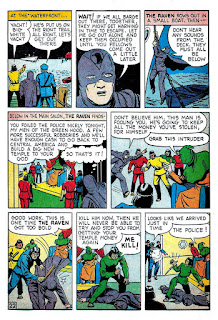 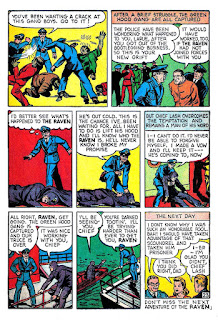 Well, I liked the look of the story, quite competent but primitive in the manner of the early Golden Age.

Apparently LaRue was astonishingly stupid, as his men were so ill-prepared for the Raven to have something more than bluster behind his challenge. But the real question is that of why no one but the Raven, Mike, the Hoods, and the cops were there. Where were the other readers of The Daily Blat? Where were the reporters? Where were the subscribers? And, especially, where the owners of the Red Star Warehouse? (Also, what had they done to deserve this?!? And how did the police imagine that the truce legally allowed for the funds not to be returned?)

Insurance companies would pay off some victims, but they might not all fully insure; and premia would increase or those who had shares in the insurance firm would lose money. (If insurance costlessly set everything right, then there'd be no reason for property owners or for communities to take steps to avoid accidents or thefts!) So, yeah, the Raven is redistributing wealth to which others have proper claims.

Joe, thanks. I neglected to mention the publisher was Ace. Appreciate your note.

Kirk, but why was a policeman masquerading as an outlaw/vigilante? Could it be because the police department was corrupt? If so, then the cops would be anti-heroes and the Raven would be the hero.