Number 2125: Three men, a dead uncle, and a mysterious artist 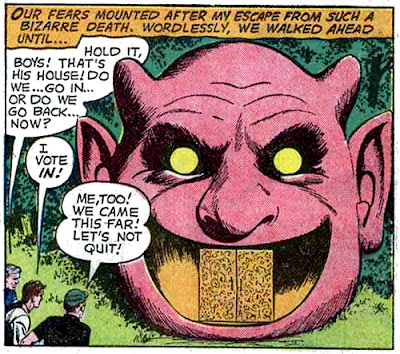 Uncle Theodore was not only a maker of ingenious (and huge) toys, he was diabolical as well. From beyond the grave he directed his three nephews through various death traps to find their inheritance. Even though dead, Theodore wasn’t going to make it easy for the guys to inherit his wealth. The unanswered question was did he want them to succeed or fail? One of the characters asks that in the last panel. Readers are left with an unanswered question.

“The Riddle of Hazard Isle” is a mystery story from House of Secrets #27 (1959). Stories in the mystery anthologies from DC could be screwy, but illustrated in such a style that even the silliest story had the full illustrative treatment. Bill Ely drew the story; the writer is unknown.

Ely is something of an elusive person; there is a shortage of online information. We know that Ely drew comics from the 1930s through the 1960s. His birth year is given as 1913 and his year of death is 1993. I like Ely’s solid style. Ely took enough pride in his work that he usually signed it, even in the days when being a comic book creator meant artists and writers were anonymous unless they chose to include a signature.

If any of Ely’s relatives, children, nephews and nieces, et al., are reading this, I would appreciate them contacting me to tell me what they know about Bill Ely. 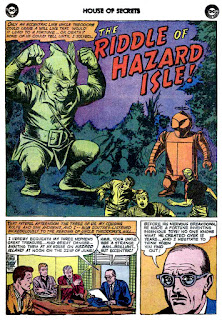 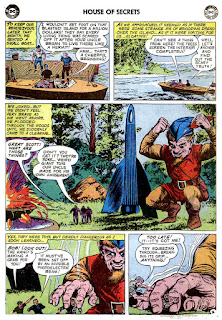 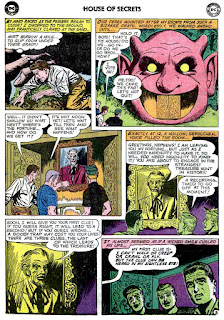 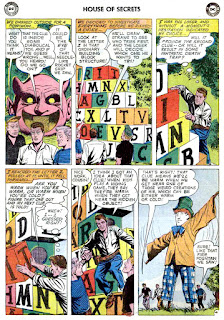 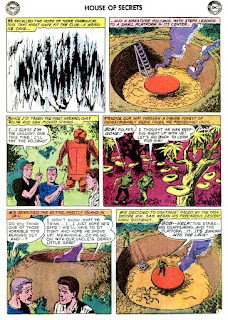 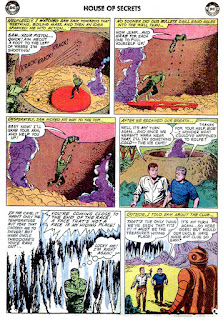 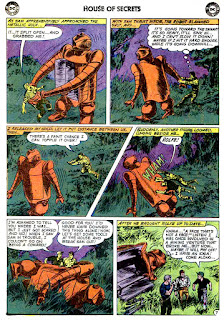 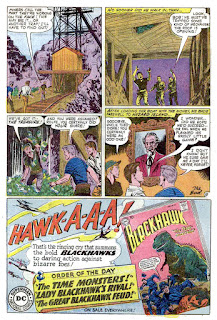 A cute little adventure story that requires an immense amount of suspension of disbelief!

Why follow the clues? The guy is dead. Come with weapons, cautiously approach everything, and search it out. They would have eventually found the mine. But that would have been a more boring story.

This were the days when DC would waste a lot of the top space of the page with the logo. I'm glad nobody does that anymore! And always the final half pages with the house ad. That was also really weird to me, as it seemed to either break the eye flow or take away part of a page that could be better used in a wrap-up. But that's just me, probably helped DC sell more comics!

My recollection is that Ely was actually a painter and is the case, some terrific painters aren't such terrific draftsmen. They loose something doing pen and ink. Ely's stuff, from I've seen -- mostly Rip Hunter -- was kind of stiff, which is to say a little dull. But the story you posted is pretty good.
I suppose it was due to their size and publishers dying around them, but Atlas (future Marvel) and DC's anthology books had a lot of great artists doing pretty great work. Were a wealthy collector -- I'm neither -- I'd be buying up DC's 50s/early 60s anthology books left and right.

Brian, according to the book
Slugfest: Inside the Epic, 50-year Battle between Marvel and DC by Reed Tucker, DC was stodgy, and it really showed when Marvel started kicking their ass in the sixties. DC is described as at the time a suit-and-tie culture, with the various editors having their own fiefdoms within the corporation.

Something that bothered me at the time about DC was the rigidity of the format, as you mentioned. I especially disliked that 2/3 for a last page, where they could have an ad, either paying ad or house ad. Nowadays, eh, I don't care, but it showed how hidebound they were by tradition. That title with logos topper was way old hat even by the sixties.

Seditionist, those were happy days in the seventies when DC started reprinting Golden Age material. Carmine Infantino, who was the publisher at the time and was later booted out, did fans a big favor by the reprints. I could afford 25¢ or 50¢ for their reprint comics, and $1.00 for the tabloid-sized editions. I suppose it could be reprints from both DC and Marvel, plus the accessibility of the blogosphere, helped bring Pappy's to life in 2006.