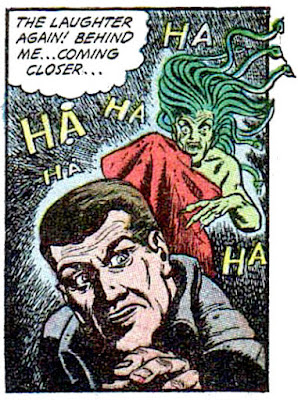 John (or Johnny) Bell (né Belcastro) was a comic book artist with a short list of published work in the early 1950s. He worked mostly for Fiction House, and is probably best known for his moody artwork, like this example, “The Ghost of the Gorgon,” which appeared in issue #10 (1954) of Ghost Comics.

According to what short biographical information I am able to find on Bell/Belcastro from the Internet, he was born in 1924, served in the U.S. Navy during World War II, got his art training the way many of the best comic book artists of the post-War era got theirs, in classes conducted by Burne Hogarth. When Fiction House shut down Belcastro worked on a couple of newspaper comics, then went into commercial art in his hometown of Albany, New York. Belcastro died in his mid-eighties, in 2010. Like some other artists of the era in which he did comic books, he borrowed some techniques from the EC Comics artists.

In the story itself the Gorgon appears to be nude on top (page 6). That’s something we usually didn’t see in comic books. The hapless guy who looks upon the Gorgon is turned to stone, but it’s the eyes of the monster that do it. I am sure that before transforming into a solid object, he took a peek at other parts of her. 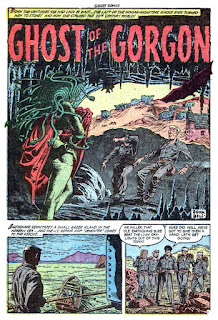 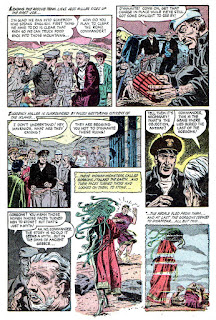 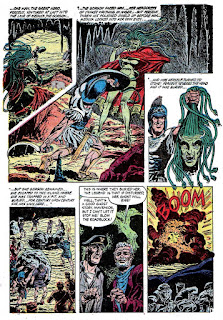 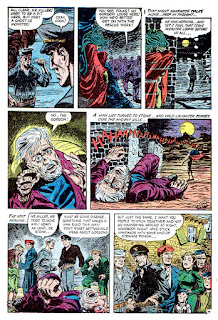 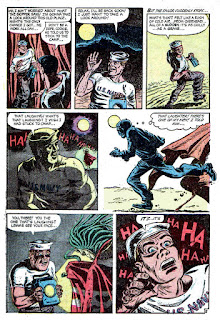 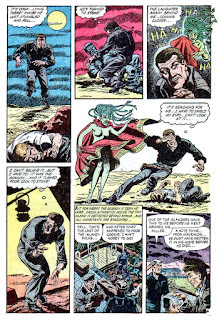 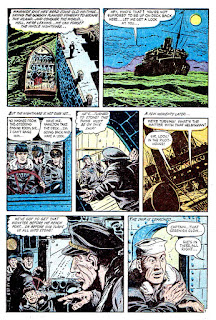 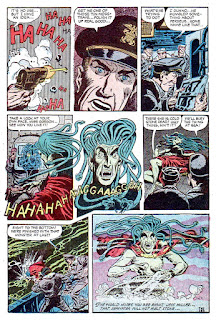 Nice art, a little busy and a little to darkly inked, but nice art!

Why they refused to color the victims like stone? I can see doing that to keep our sailors in the dark, but it just makes almost all of the rest of the story confusing. The one scene where they go into the wheelhouse ... who is stone? Some of them? All of them?

They got away with a good bit, here, right at the end of pre-code: topless gorgon!

She may be nude on top but I don't see any nipples. Possibly she's a precursor to the Barbie doll.

I certainly see some of the EC influence that you note in the art.

The Greek myths of the Gorgons and of the Basilisk represent two different theories of vision, which the author of this story has confused. It was looking upon a Gorgon that caused one to be turned to stone, while it was being looked upon by the Basilisk that brought similar effect. In other words, the eyes are receivers in the story of the Gorgons, while they are projectors in the story of the Basilisk. The Greeks could and did combine these two theories, imagining that the eyes both projected and received; but the point remains that the eye was not to look upon a Gorgon not to be seen by a Basilisk.

As the story relates, after Perseus slew a Gorgon by causing her to see herself, he used her head to turn other foes into stone. Which is to say that looking upon a dead Gorgon was fatal. Yet that is exactly what two chuckle-heads are shown doing in the antepenultimate panel, without apparent ill effect. Of course, this story imputes the power of the Gorgon to her eyes, but how would the swabs know that her eyes were closed or otherwise not directed at them?

Brian, Kirk points out the Gorgon has no nipples. Which makes me wonder, since topless men in comics were always drawn sans nipples, why couldn't topless females have been drawn in comics the same way? Guys could take their dad's fountain pen and draw the nipples in.

Daniel, thanks for the lesson. I have been turned to stone by some females in my time, but they were usually return looks for me looking at them.

Hahaha! Fill in the Blanks Comics “The Magazine for Men and Boys Who Know What to Do!”

This story breaks a fairly big rule by having the outsiders who provoke the curse do it for completely decent reasons.

Like Hercules in adventure comics, Medusa seems to be easily the most popular mythological figure in horror comics. I wonder if there's a list of how many times she's appeared in them.

John Belcastro was my uncle. After retiring from comics, he took a job for Tobin First Prize, a meat packing plant in Albany, NY, where he created art for the company's ads and fleet of trucks. After Tobin's closed until his retirement, he was an independent sign painter, specializing in lettering and gold leaf work.