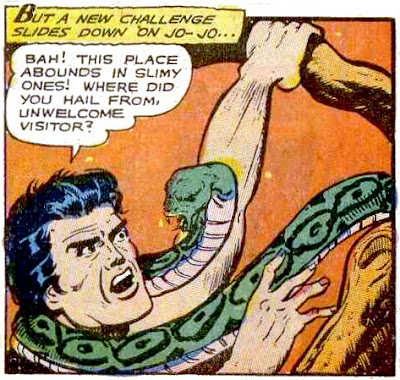 Over the years I’ve shown lots of jungle girl stories, but, except for Tarzan, not many jungle guys. So, beefcake fans, rejoice. Here is Jo-Jo, Congo King, originally created in 1947 for Victor Fox’s sleazy comic books. Fox brought his comics line to a halt in 1949, but Jo-Jo lived on, and made occasional appearances in comics from Star and Skywald. In 1971 Skywald published three issues of Jungle Adventures, a 25¢ squareback comic, featuring mostly reprints from Avon and Fox, and a new jungle guy, Zangar, in stories drawn by Jack Katz. All three issues featured Jo-Jo reprints. This Jo-Jo episode appeared in Jungle Adventures #3 (1971). The story’s original appearance was in Jo-Jo Comics #23 (1949). Like some other characters published by Fox, Phantom Lady and Blue Beetle among them, the artwork and scripts were done by the Jerry Iger shop.

Jo-Jo wandered the jungle with his girlfriend, Tanee (who looks a lot like Rulah the Jungle Girl). Tanee’s job in Jo-Jo stories, based on what I have read, is damsel in distress. She even whimpers in one panel, “Ohh [sic], why does Jo-Jo not come to rescue me?”

Not since a time long before this story was originally published in 1949 (like, say, the Victorian era) has there been such corny dialogue written for characters as it is written in this story. Aiieee! 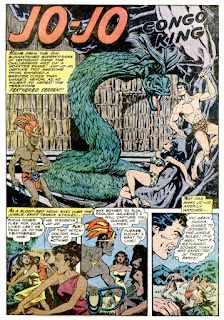 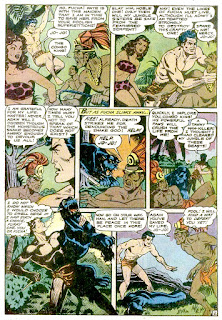 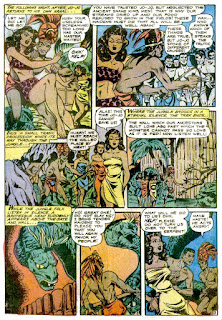 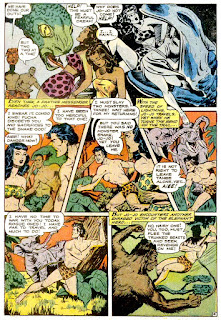 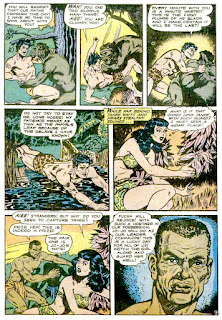 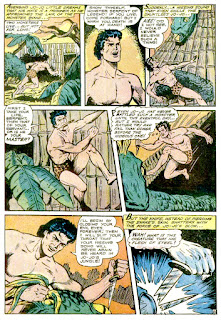 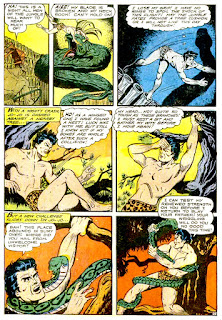 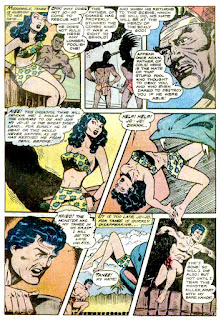 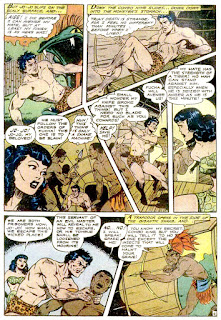 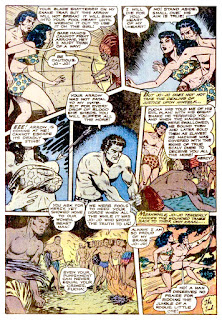 I have somewhere read that Jo-Jo were originally a person of color, but was transformed into yet another Caucasoid transplant. I have mixed feelings about that thought. On the one hand, I deeply regret that, for such a long time, the mainstream of our culture resisted presenting non-comedic heroes who were not Caucasian (and especially non-comedic heroes who were Black). On the other hand, Jo-Jo is in any case a lousy hero in lousy stories, so that perhaps a Jo-Jo of color would have gone on the debit side of the ledger.

The fundamental absurdity of this particular story is that Jo-Jo struggles to reach the location of interest by taking what he must have imagined as a short-cut, while Tanee is abducted after his departure and arrives at that location more quickly, with her kidnappers traveling by some more conventional route.

But we also see a silliness found frequently in comic books, that of a protagonist fighting with some animatronic beast, then being swallowed by it, but then overcoming its operators who are quite unprepared to confront him. Really, he ought to have been met with a fusillade of spears and of arrows.

I think that the dreadful dialogue is devolved from the sources of inspiration. Some of the worst pulp writing was by authors who imagined that a faux archaicism transformed what they did into real literature.

Daniel, you may be thinking of Voodah, who began black in Crown Comics #3. Matt Baker is credited with his creation. When Voodah was on covers he was Caucasian, and was soon Caucasian in the stories, too. This was the late forties, and Voodah's time in comics ended with Crown #19 in 1949.

Stories in Iger-provided shop jobs were usually by Ruth Roche, but I don't know if she did them all. She used a kind of archaic style in her jungle and pirate stories. I remember what I read by Stan Lee many years ago about writing such tales: He just thought of the King James version of the Bible for his reference.

The writing style I hate even more than someone trying to sound antique is dialect writing. I neither the time nor patience for it.

Ah! Perhaps I confused Voodah with Jo-Jo, or perhaps my source did. But, in any case, thanks for the clarification!

I don't mind archaicism when it's done competently; but, most of the time, it just isn't. People use the wrong case, the wrong grammatic number, &c.

And, yes, Stan Lee came to my mind too. As a kid, I found Thor tedious because of the faux Early Modern English. (I'd probably still find those stories tedious, but I've not looked at one in a very long time.)

Excepting cases of subtle dialect writing, it is indeed tiresome. But I don't know what properly to do when a character is supposed to have a distinctive accent and so forth. If the narration just announces the distinctions but the dialogue ignores them, then many or most readers will forget them, even if they have bearing on how the story proceeds. Of course, most attempts to convey dialect are just attempts to add jocular or hateful color.

Daniel's first comment is just what I was thinking - if this particular jungle hero character leaves a bad taste in your mouth to begin with, why argue in favor of making him black instead of Caucasian?

Snake fans (including me) would hate the end of Page 7, and not just because of the animal violence, but because it trots out the famous "slimy snake" image. The idea that snakes are SLIMY is one of those ideas that reptile experts are always trying to DISPEL, but it keeps hanging on.