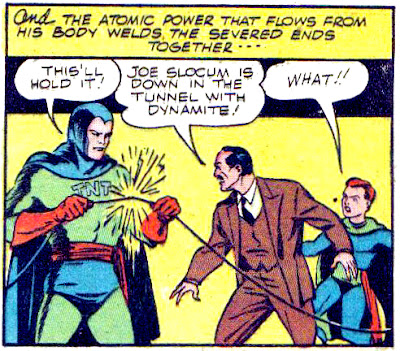 Tex N. Thomas, a teacher, and Dan Dunlop, a student, are a team of superheroes whose powers are brought out by touching their rings together. The feature, which appeared in Star-Spangled Comics from DC, didn’t have a long lifespan, just 17 episodes during the early days of World War II. It's filler. What is interesting to me is the cliché of having a grown man running around with a young (very young) boy. Tex is a teacher, for cryin' out loud. Maybe that sort of relationship didn’t set off alarm bells nearly 80 years ago as it does today. I am not sure if Robin was the first kid sidekick, but I understood the reason for attaching him to Batman (as a “ward” no less) was so kids could identify. Jules Feiffer, in The Great Comic Book Heroes, made a point of saying as a kid how much he hated Robin. Robin was what he, Jules, should be like. The better fantasy for Feiffer was allowing himself to grow to adulthood and become Batman, rather than have to immediately become the young, athletic Robin. And Dr Wertham had something to say about Batman and Robin, also, that he saw the relationship as being kinky.

There is also the element of danger kid sidekicks were subjected to in superhero comics. The idea was common in comic books. I was interested to read what the late Don Markstein had to say of TNT and Dan in his Toonopedia listing for the pair. He mentions that Star-Spangled Comics #23 was the last appearance, and: “TNT and Dan weren't seen again for decades, and even then, underwent only a slight revival. The fact that they got included in the '80s All-Star Squadron scarcely counts, since practically every DC-owned 1940s costumed character did that. Of slightly more significance is that Dan subsequently allied himself with Merry, the Girl of 1,000 Gimmicks, and several other former young superheroes, to form Old Justice — an activist group, devoted to keeping children from being endangered by superhero work, as Dan had allowed himself to be endangered during his own youth.”

This is a tale of Tex and Dan, exposed to danger, in the world of sandhogs, from Star-Spangled Comics #13 (1942), artwork credited to Louis Cazeneuve. 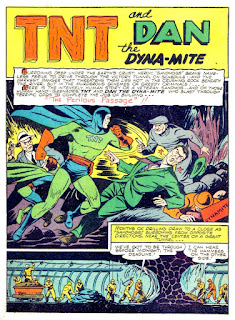 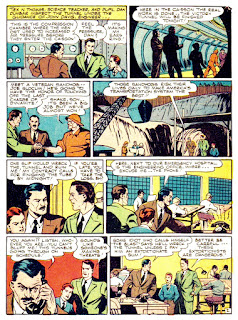 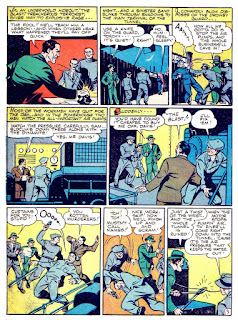 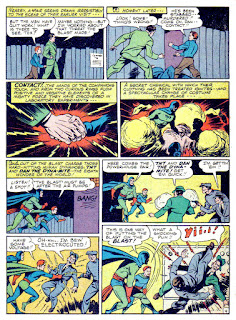 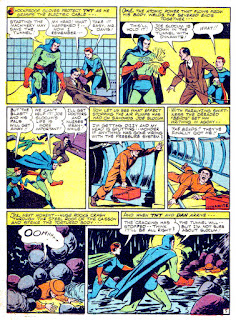 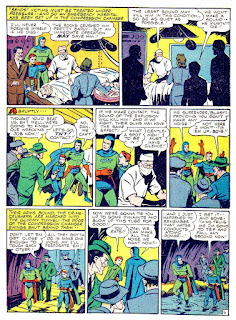 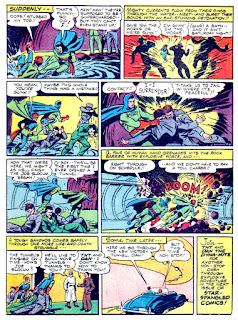 "The Tick" had fun with the sidekick thing. The original comic featured a visit to a superheroes-only club, where Arthur is banished to a sidekicks lounge full of bitchy teenage boys. The not-young Arthur defensively insists that some superheroes prefer a more mature sidekick.

The animated series adapted it, dispensing with the teenage boys and keeping the talking animals: a nostalgic dog and a bitter old orangoutang.

TNT and Dan the Dynamite's first new Bronze age appearance was in, of all things, Super Friends 12, which wasn't a half bad story. This was after being seeing in a DC reprint to which I don't recall in the 1970s.

I think Neil is recalling the reprint of their first story in 100-Page Super Spectacular DC-18 (July 1973).

This kid-sidekick thing has puzzled me for a long time. I was 100 percent on Feiffer's side when I was a boy. I could imagine myself growing up to be Batman but I sure as heck wasn't Robin. Rereading Golden Age comics, I find some later Quality comics particularly odd. The boy sidekicks of cowboy Arizona Raines and pirate Black Roger are extraordinarily jealous and possessive. They pop their corks when their hero seems to be falling for a woman. Often they work proactively to torpedo the romance before it breaks up the partnership. At the very least they whine loudly and beg the hero to leave town before it's too late.

T.N.T. and Dan were used by Roy Thomas to sub for the no-longer existing Batman and Robin in the post-Crisis Young All-Stars comic, which is where I first learned of them. Thomas blew his own idea by killing off one of the pair in the initial story, never explaining how the "balance" he'd supposedly corrected was not once again screwed up by the death.
I'm not that old yet, but from what I've read "kids" were not nearly as coddled back then as they are now. By 16 a lot of kids had already been working for a few years, even if only after school. There were still apprenticeships, as opposed to interning, which is not the same thing. But, yeah, I doubt many adults would choose to have a kid tag along, especially not in dangerous situations. That was clearly aimed at bringing in an audience.

I really liked how Dan the Dyna-Mite was repurposed by James Robinson in his story, "The Golden Age." I won't spoil it for anyone who hasn't read it, because it's a (pardon the pun) dynamite story.

He even tips his hat to TNT's quick cancelation in the narration, by alluding to Tex dying early on during the War, leaving Dan alone and aimless.

Kenn, sorry for the delay in responding to your note.

Yes, kids have a different life than they did even when I grew up in the fifties and sixties. Kids were disciplined when they were young, often harshly, which I didn't think was a good thing when it was me being disciplined. When I had my son I decided I would never use any of the "corrective" discipline my parents used on me (carrying on how the tradition of they were treated in the 1920s and '30s.) Then he had his children and is what I consider an excellent father whose kids are (generally) well-behaved.

Going back even further than my parents, there were kids working in coal mines and sweatshops when they were ten years old.

I know you already know this, but some days I just can't turn off my pedantic nature.

Donald, ah, the Tick. Love that character, one of the few superhero parodies I have been able to stand.

It has been many years (the nineties, probably) since I read the comics, but in the two TV series at least Arthur is a grown man.