Number 2128: Firebrand zaps right out of the comics 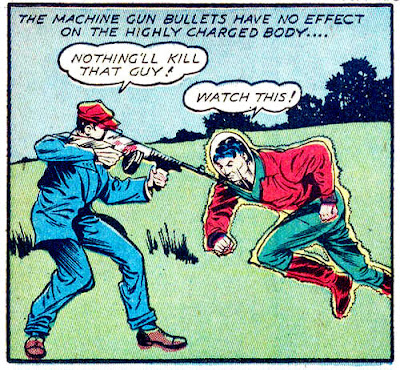 There were two Golden Age characters named Firebrand: one from Quality Comics (see the link below) and one from Harry “A” Chesler. The Quality Firebrand lasted 13 issues in Police Comics, and the Chesler Firebrand made it for one issue of Yankee Comics. (There were reportedly more stories of the character in Harvey Comics later, but I have never seen them. According to the Public Domain Superheroes website, there is a question as to whether it is the same Firebrand as the one from Yankee.)

This Firebrand, from the aforementioned Yankee Comics #1 (1941). drawn by Charles Sultan, was a lineman who got zapped while working on a power line. He was taken into care by a professor who experimented and juiced him up good with electrics. All he had to do was clench and unclench his fists. And he could leave the ground by just jumping and the electricity made him airborne. Wow. He took care of the bad guys, and yet apparently no readers felt a tingle of electricity from the pages when they read about him. Or, perhaps since he appeared after the Quality Firebrand, Busy Arnold, Quality’s publisher, may have called Harry “A” and threatened to bring down some legal lightning bolts. At this late date nobody really knows, and this Firebrand is one of those one-and-done superheroes from early comic books. 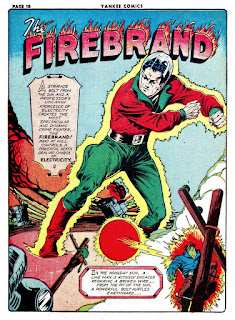 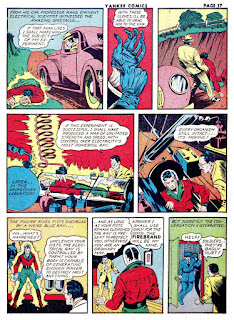 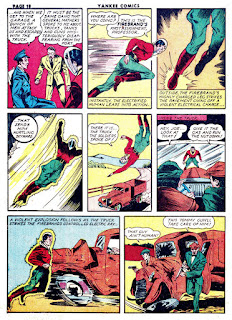 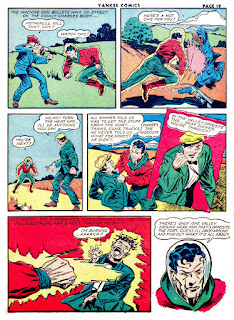 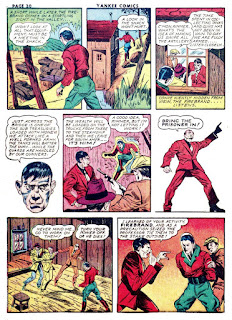 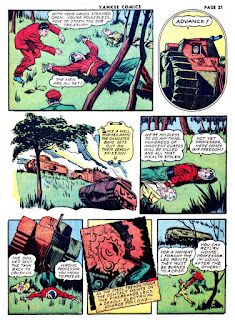 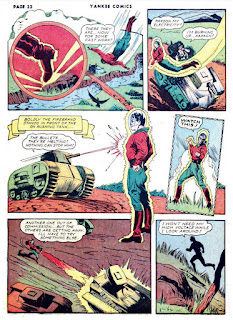 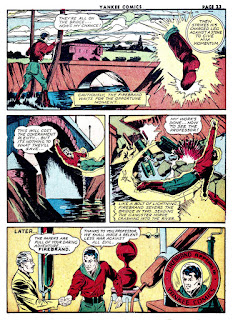 Here is a tale of the Quality Firebrand from Police Comics #5, which I posted in 2013. It is included with a tale of a strange Batman, and a link to a Bad Batman. You have been warned! 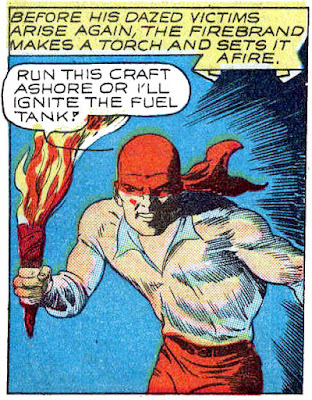 I'm unsurprisingly reminded of Man-Made Monster (1941), the story of a man transformed by a mad scientist into a creature carrying and sustained by a tremendous electrical charge.

The layouts here are pretty good, but Sultan produced much more polished art at other points in his career.

The story is essentially slapped-together. A man with the requisite expertise (the professor) just happens along at a fortuitous time. Firebrand understands his powers and is skilled in their use ab initio. The chief villain somehow knows about what Firebrand has been doing, knows about his connection to the professor, and has the professor kidnapped and brought to the shack before Firebrand arrives. Firebrand choose dramatic means of killing the villains, instead of just electrocuting each and all with minimum destruction of other things.

Speaking of homicide, the first wave of comic-book censorship would have been a problem for Firebrand. His ability is explicitly associated with dealing death; he doesn't subdue anyone, except with the threat of death (and that is only temporarily effective).

Daniel, first, thanks for teaching me a new phrase today, ab initio.

Gosh, you aren't incineratin' (Bowery Boys-speak for "insinuating"...I too know fancy words)that a comic book creator would swipe a concept from a movie? But then, why not? Swipes are free, and there are only so many ideas floating around out there.

With the ability to use the threat of death, you would think Firebrand would have been on the other side of the law...but threats, dire and direct or implied, are part and partial of our culture. Even good guy culture. (In some movies, ability to deal death, even to villains, is handled by characters who obviously lack any kind of conscience, and they are the heroes.) I believe that if there had not been compassionate and wiser people at times in our history we would today be like the sorry past when death and/or torture were the punishments for almost everything. As it is, we could conceivably go back to that mentality easily without laws to prevent it.

We get the word “draconian” from reference to a fellow named “Dracon”. He was widely considered upright, and asked to undertaken a revision of the legal system of his community. What he subsequently proposed to outlaw was not considered a problem, but the penalty for each and every violation was death. His fellows declared that these were not laws for men but for dragons (“dracon” meaning indeed dragon).

While I don't know of a community that adopted such a penalty structure in a system of formal law, sometimes respect for legislation can be an source of cruelties that seem unlikely to be typical in societies less formally governed. And, now-a-days, those of us in America are under rule of a system in which almost everyone unwittingly commits a few felonies on a typical day, the incarceration rate is through-the-roof (mostly because of victimless crimes), and prisons are Hellish.

I'd suggest (though I certainly could be wrong) that the madness of our formal legal system has done more to contaminate than to control our informal response to crime and to other perceived social disorder. Mind you that I don't believe that an abolition of the state would now set that right.

Daniel, you bring up something I skipped over, and that is the incarceration rates in the U.S. are said to be the highest in the world. And who gets incarcerated? Look at any picture of a prison yard and you see that in the United States we are tough on people of color. White people go to prison, also, but proportionally you could say that a black person is likely to get sentenced to prison for relatively minor offenses.

Every year I see my state legislature pass more damn laws, until I am afraid to go out of the house. As you say, I could accidentally commit a felony.

Years ago I was reading about the Old Bailey, and a particular trial, somewhere in the 19th century, where a couple was accused of bank fraud, and the penalty was death. A lot of offenses were capital offenses in those days. The judge said no to that, and gave them a prison sentence instead. According to the notes written about that trial (and I'm sorry I can't remember what it was) the British populace was becoming weary of capital penalties for infractions less than murder.

And finally, here is another of my personal stories: Some years ago when I was working with artist Richard "Grass" Green (now deceased), he told me he had never been in jail or prison, and said, "I pray to the Lord I never am." I thought it was peculiar. Why would be go to jail or prison? But Grass was African-American, and I remembered what he told me when years later I read that 1 in 5 black men have run-ins with the law that result in jail or prison time. Then I knew what he meant.