Today is the traditional American holiday, Thanksgiving Day. Here at Pappy’s it is time for our annual Thanksgiving Turkey Award, where I present the most off-the-wall story I’ve read all year. This year’s honor goes to Dr Hypno...a psychologist with no other identity, except as a crime fighter. He has a unique power. He can hypnotize animals, then take over their bodies while his own body lies in coma. But he can put the animal in danger when he goes after crooks.

Dr Hypno, created, written and drawn by Frank Thomas, no stranger to odd characters (“The Eye” was another memorable creation of Thomas’s), gets three turkeys from me because I can say, at least in this first episode of eight published in Amazing Man, that Dr Hypno is a bird brain. Dr Hypno tells his manservant, Wun, that while his mind occupies the body of an animal, if the animal is killed then he will be killed, also. He doesn’t say anything about being a dog, and needing to be walked. In that state one hopes Wun uses a doggy bag to pick up Dr Hypno’s droppings. And that is all I want to say about that. 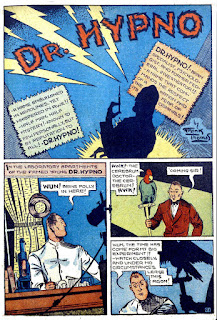 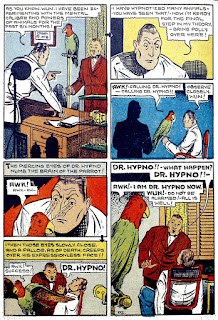 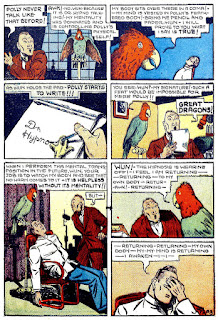 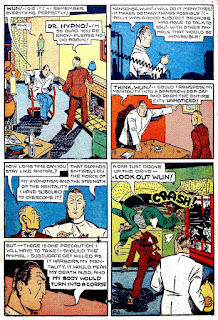 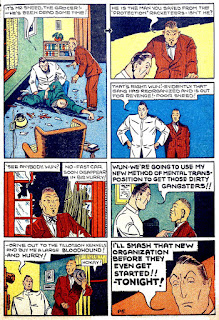 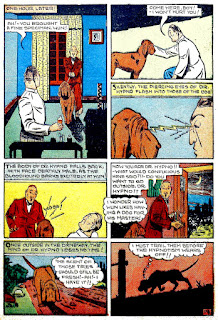 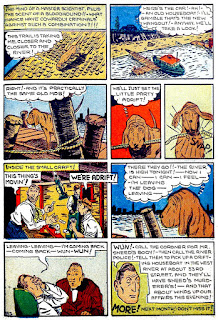 If you go back to our last year’s entry, you can begin to link back to the 2006 beginnings of this turkey of a tradition. Just click on the thumbnail. 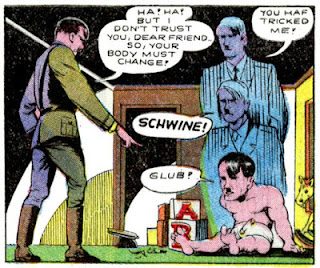 “He is the man you saved from the ‘protection’ racketeers — isn't he?”
“Well, Wun, I'd say that proposition has probably been falsified!— Poor, trusting Sneed!”

“Right! — And it's practically the same old mob! I probably should have seen to their arrests and convictions, as opposed to merely performing the shaming gesture!”

Let's say that Dr Hypno had merely put the hound on the scent in an ordinary manner. What case, exactly, would he then have to present to a court? How would having seized control of the dogs sensory organs and limbs have strengthened the case?

Why couldn't Dr Hypno direct the police to the docked boat, rather than set it adrift?

Also, how would Dr Hypno know that the gang couldn't make use of whatever means of steering and propulsion had got the boat to that dock in the first place?

And what happened to Sniffy — or whatever were the name of that dog — deserted at the dock?

Yeah, that was one pretty big turkey!

Dr Hypno is kind of demanding, isn't he? "Wun, drive out to the Tillotson kennels. Buy me a large bloodhound — And hurry!"

Too bad Wun doesn't follow up with the obvious. "Yes, Dr Hypno. You want pedigreed? Male or female? How do I pay? Can I borrow your American Express Card?"

You would think Dr H would bring the dog back to the house for a little kibble as a reward. Tsk tsk. Those crazy, uncaring comic book scientists...

My theory is that Dr Hypno had an account with the Tillotson Kennels. Once each month, they'd bill him for whatever disposable dogs he'd got from them.

It's a sin t' be takin' this money, Pete Tillotson would think, as he sadly watched another dog led away by Wun. But he always sold the dog and sent the bill. What d'ya s'pose he does with them? Pete shuddered, and turned to the racing form.

You're being kind with 3 turkeys here.

There's next to no actual action from Dr Hypno here. Sure, there's a guy flying through a window, but that's passive to Dr. Hypno. He just jumps into a dog, follows the trail (you know, the dog can do that BY HIMSELF!) and then calls the cops.

What an exciting adventure!

Alicia, hope you had a good holiday.

When Amazon.com starts selling time machines I want one, and I want to go back to 1940.