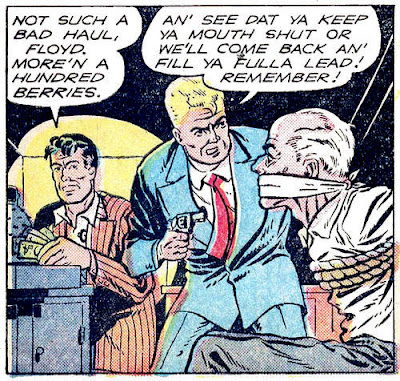 Artist Johnny Craig did this version of the life of “Pretty Boy” Floyd for the 1948 ME one-shot, GUNS of Fact and Fiction. Before he became a major talent for the (in)famous EC Comics crew Craig was like the rest of them, free-lancing amongst the comic book publishers of the day. (“Ghastly” Graham Ingels drew the lead story of the issue.)

I don’t verify the truth in this comic book version of the gangster’s story. Floyd ended up shot down in a field and then he entered American bad guy immortality. Pretty Boy is celebrated for his place in the gaggle of gangsters of the early-to-mid 1930s, roaming the country robbing banks and thumbing their noses at law enforcement. The only truth I can verify is my appreciation for Craig’s clean-cut artwork, beautifully staged, crisply drawn and inked. 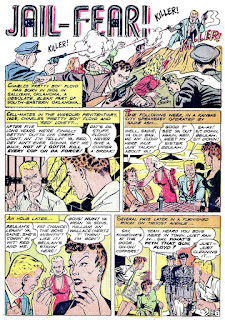 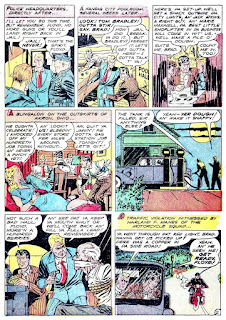 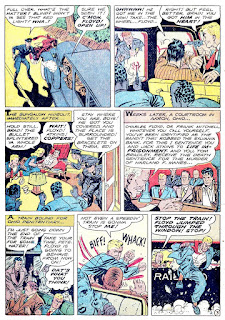 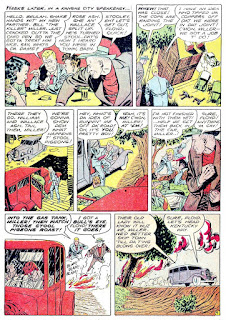 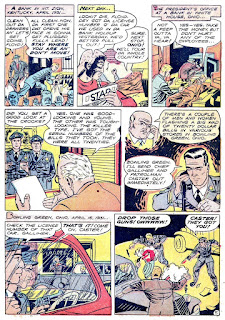 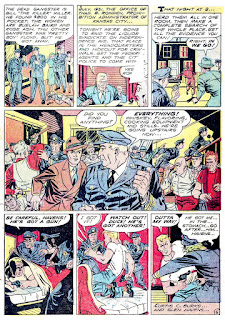 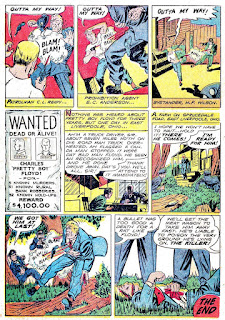 Email ThisBlogThis!Share to TwitterShare to FacebookShare to Pinterest
Labels: GUNS of Fact and Fiction, Johnny Craig, ME Comics

Yeah, that exciting escape from the train simply never happened. And there are other details that are wrong. On the other hand, very different stories have been told by the officers who were present at Floyd's death, which may even have been an extrajudicial execution of a wounded and disarmed man; a writer's guess might be as good as any one of the accounts.

As this story is told, Floyd's life was essentially chaotic; I'm sure that it had its chaotic aspect. But, in real life, there was also connection to the institutional structures of criminals; I'm generally interested to understand those connections. I think that, were someone to attempt a series of true crime graphic novels, the work could benefit not only from extensive research but from planning-out how to tell the single story that could emerge from an understanding of history.

Without the signature or the testimony of someone whom I trust, I just never would have recognized this work as that of Craig.

While Craig was known for his Vault work at EC, I always thought he was much better at the crime comics, especially when doing his own layouts/stories. He had a really good eye for pacing and dynamic shots.

Here his work seems pretty constrained in the format, with a LOT of text (yeesh.) It's still Craig, clean, defined, etc. I like the ending shoot-out mentioning the names of the victims, that's a nice piece of cinematic work for a pretty predictable crime comic.

One wonders just how many times Floyd's story has been told in comics, I swear you've had a couple by now!

Daniel, I always recommend Bryan Burroughs' Public Enemies, which gives a history of that lawless era, and the mistakes by the FBI that molded it into the modern organization.

I saw those days in the early '30s as being the last gasp of the wild West, with outlaws driving cars instead of riding horses.

What?! Surely you don't suggest that any police agency members would gun down an unarmed person? Why, that would result in vigilante law, with cops being judges, juries and executioners. Never happens in America (Pappy said in his sarcastic tone.)

As a matter of fact, the killings of Bonnie and Clyde was a planned assassination. And there were criminals that J. Edgar Hoover did not want brought in alive. He wanted them safely dead.

There are a lot of tells in the story that point to Johnny Craig as artist, even though it is not as slick as his later work. The main tell is his signature in the splash panel.

Brian, I have at least one other comic book version of the story of Pretty Boy Floyd, and that is from a 1948 Fawcett one-shot called On the Spot. When I bought a copy years ago I soon found the pages were out of sequence, so I numbered them with pencil after figuring out what went where. I have resisted scanning it because it is just too big of a mess for me to deal with.

I'm almost surprised this doesn't include the "Kansas City Massacre," because Floyd was supposedly a part of it, except that I've heard there's a lot of argument about that. And besides, it's a pretty big story all by itself.
I know that subject almost entirely from a really strange biopic of Verne Miller, with Scott Glen as Miller and Andrew Robinson as Floyd.