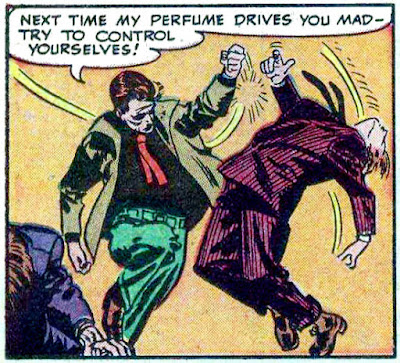 Alex Toth did the artwork on the Sierra Smith backup feature for Dale Evans Comics for the first 11 issues of that title.

Like many artists who entered the comics field in the era he idolized comic strip artists Milton Caniff, Alex Raymond and Hal Foster. It is too bad he didn’t have a long-running comic strip of his own, but for some reason he was never syndicated.

Toth could be cranky and opinionated, but no one ever accused him of not being able to draw. He was also not shy about telling other artists what he thought of their work. On the subject of painted comic books his wikipedia entry quotes him: “. . .in a 2001 interview he criticized the trend of fully painted comics, saying ‘It could be comics if those who know how to paint also knew how to tell a story! Who knew what pacing was, and didn't just jam a lot of pretty pictures together into a page, pages, and call it a story, continuity! It ain't!’ Toth lamented what he saw as a lack of awareness on the part of younger artists of their predecessors, as well as a feeling that the innocent fun of comics’ past was being lost in the pursuit of pointless nihilism and mature content.” I sometimes did not agree with Toth, feeling sometimes he was being obdurate just for its own sake, but on that opinion I agree. I think this story is yet another example of Toth “telling it.” 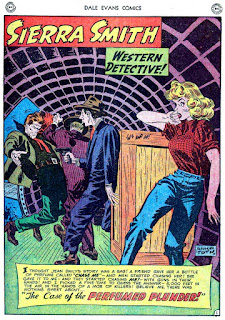 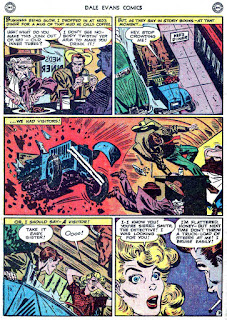 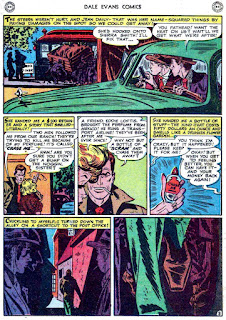 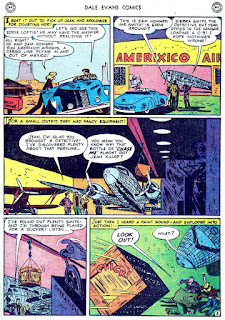 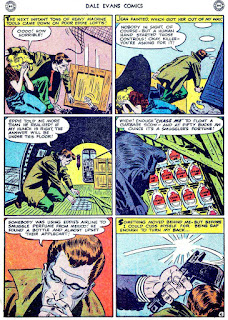 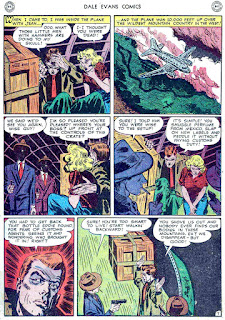 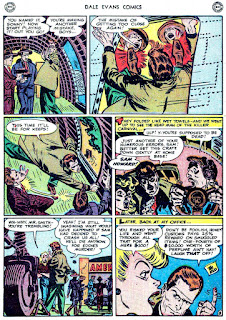 Here is another Sierra Smith story. Just click on the thumbnail. 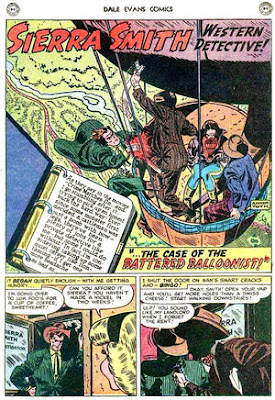 There's a great story about Steve Rude (who can be cranky in his own right) sending samples to Toth and having Toth critique them, and he's NOT kind! Just google Alex Toth Steve Rude and they will pop up. Pretty interesting from an art perspective, and Toth is actually trying to help Rude out, and Rude was himself a great artist (in training, at that point.)

This is a fun mans-man adventure story. Lots of punching, last minute saves, damsels in distress, and smugglers. Toth's work is a little less crisp than I am used to, but that might just be printing/etc problems.

I was under the impression that Toth was colorblind, so he saw comics mainly in shades of grey and black. That may explain why he was so good at spotting blacks and shadows.
Color blindness also would translate his attitude on painted comics. Shades and hues of color wouldn't have the same impression on him as to a regular sighted person. Still he was a comic genius and an icon of the late Golden, early Silver Age.

Gordon, unless I missed it somewhere, Toth being color blind is news to me.

I believe Toth was giving an opinion that C. C. Beck had also argued in the seventies. Beck thought that artists like Barry Smith drew pages full of poster-like panels; pretty pictures that did not tell a story. Some people like to look at pretty pictures, but that wasn't comics, according to both Beck and Toth.

Brian, I do remember that critique of Rude by Toth. I give Toth credit for being outspoken, but I'd hate to have been on the other end of his outspokenness. I hope Steve took it in the spirit of wanting to learn and getting an expert opinion. Had it been me, getting both barrels from Toth would have probably put me in hospital.

Canwell:
Isn’t this like asking, “When the ground beef is cooked up as a hamburger, does it lose something by not being served as steak tartare?” It’s still pretty tasty either way, isn’t it?

As for Toth drawing for color — an intellect as keen as Alex’s would always keep the end result in mind as he worked, but remember [A] he was color-blind, so his own color sense was far from impeccable and [B] he knew what the coloring process was for comics during his heyday, and he knew how often it produced bad results

Gordon, thanks for the reference for Toth's color blindness.

I wonder to what extent he was color blind? If he was red/green color blind then drawing for comics would be different than driving a car.