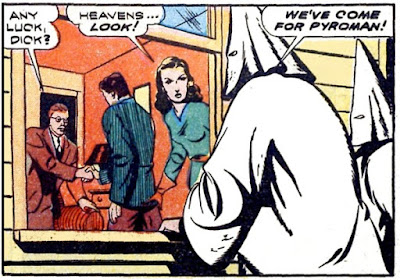 The name Pyroman is close enough to pyromaniac that one might assume Pyroman is a villain who commits arson. But Pyroman, a good guy who fights America’s enemies, is yet another comic book survivor of something that would kill the rest of us. In the origin story wrongly convicted Dick Martin survived being electrocuted in the electric chair. He then became a costumed, super-charged superhero.

Pyroman’s superpower is something I would like to have: being able to zap people with electricity. He is a kind of walking stun gun. Very cool. I wouldn’t use the power indiscriminately, of course (“with great power comes great responsibility” and all that rot), but if you are talking too loud on your cell phone or weaving in and out of traffic, or an annoying politician (in other words, being a jerk), then fear the stunning blasts from the fists of Pyropappy!

In this story, from Nedor’s Startling Comics #20 (1943), Pyroman goes up against saboteurs who look a lot like hooded Ku Klux Klan members, and conveniently identify themselves as Nazis with a big swastika on the front of their robes. Oddly, they call themselves the Black Boas. Those tricky Nazis...just full of surprises. 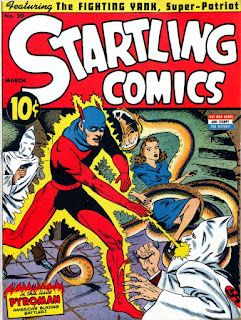 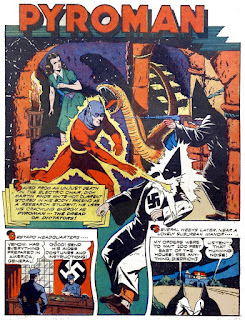 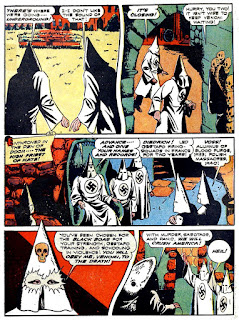 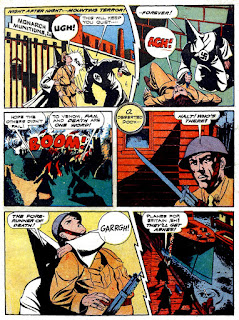 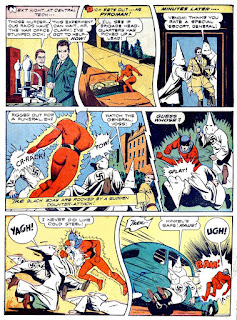 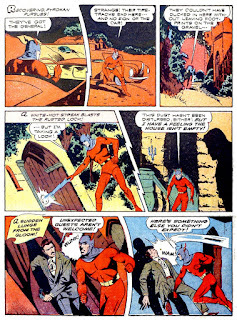 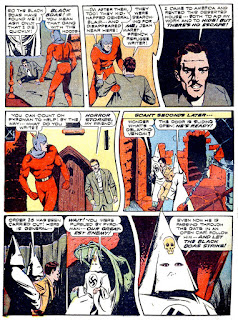 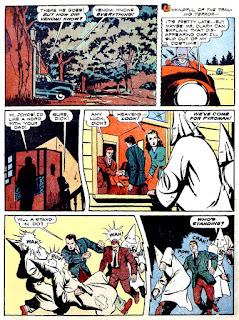 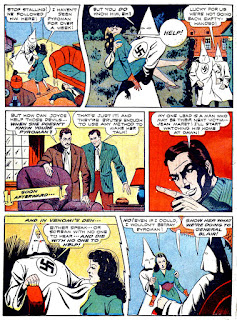 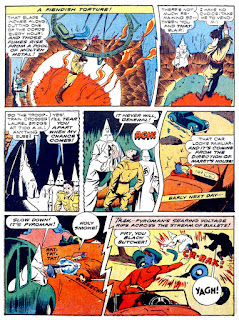 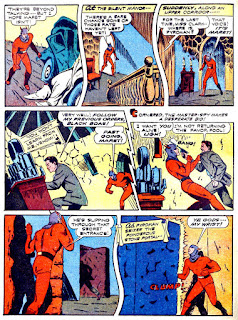 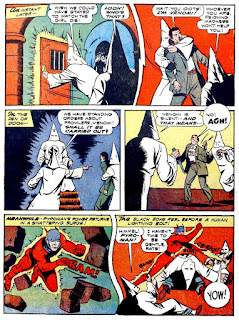 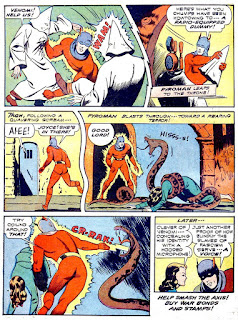 Here is another Pyroman story. Just click on the thumbnail: 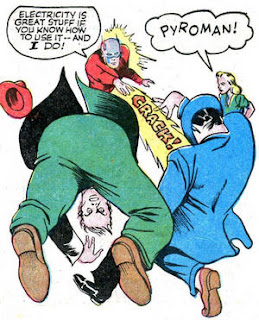 “Send his aides costumes”?!? Now, there's a good use of resources in war-time, shipping Klan outfits to America, 'cause apparently the sewing of the swastikas onto them would be too much of a challenge!

(Why did it take so long to beat those guys, when we even had superheroes on our side?)

The whole story was worth it just for that completely unnecessary but caption!

Somebody needs to look up with "pyro" means! Note that this story doesn't have our hero get captured -- he does get knocked out -- so it was half way there. No death traps. Got his wrist caught in a multi-ton stone door and, well, that part goes unexplained (you can infer, though, but that's not good comic writing.)

Hey, Nazis, not that I should give you good advice, but next stealth mission, how about you ditch the bright white robes?

Daniel, can you imagine taking Klan robes to a tailor shop with a stack of swastikas and asking to have them sewn on?

When talking with Otto Binder years ago he told me kids would write to Fawcett and ask, "Why doesn't Captain Marvel just go win the war?" That was when someone had to inform them that Captain Marvel wasn't real.

No one could have been that dumb, could they? I mean, Captain Marvel could not have won the war, but Superman could have done it easily.

Brian, sometimes I wonder if the fiendish torture isn't to the heroes of the stories, but to us poor bloggers and readers who have to slog through the stories.

Fifth columnists/saboteurs 101 would dictate that wearing bright white robes is probably not a good way to perform sneaky sabotage.