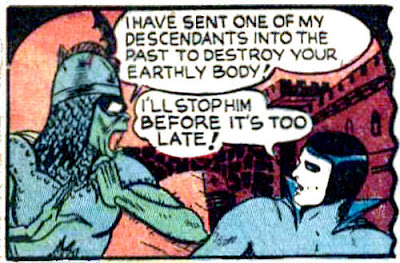 This is a re-telling of the origin of Mr Justice from the last issue of MLJ’s Blue Ribbon Comics. Mr Justice, also called the Royal Wraith, was a ghost who apparently discorporated and returned intact in Jackpot Comics #5.

Why was this the last issue of Blue Ribbon Comics? I will guess it was because in 1942 paper rationing was instituted as World War II began for Americans. MLJ, like other publishers, had to trim where they could. Just a guess, mind you.

Joe Blair wrote and Sam Cooper drew this tale. It has a hideous green spectral figure popping out of the splash panel: “the ghost of Rogers,” as the Grand Comics Database explains. MLJ was still in its wilder phase, which began to tone itself down as they shed themselves of superheroes over a period of time before morphing into Archie Comics. 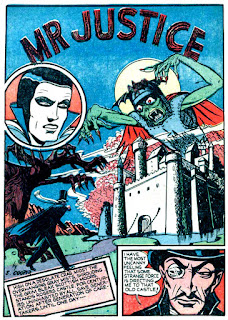 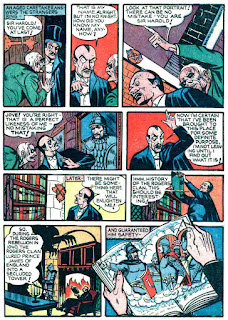 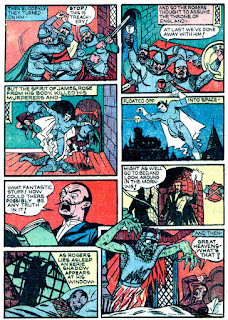 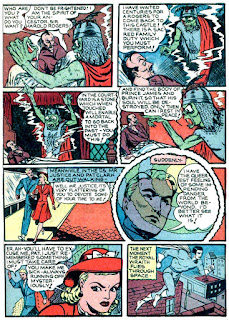 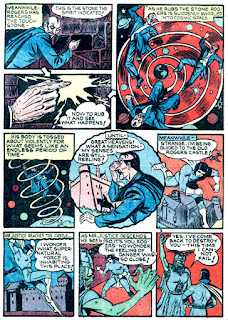 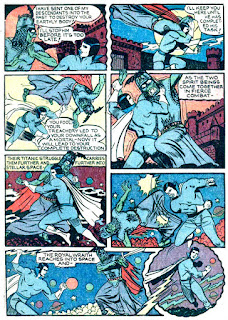 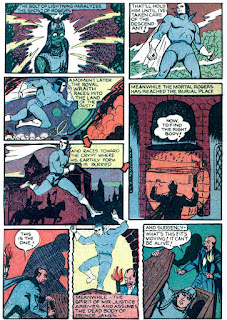 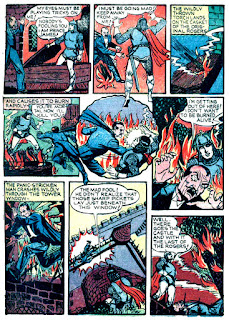 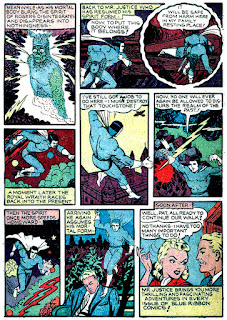 This tale exhibits silliness of a sort that has been variously noted elsewhere, specifically that the past and present or present and future are treated as simultaneous. The spirit of wicked Sir Rogers proposes to delay Mr Justice from preventing something that would already have occurred or have failed to occur. And, that evil spirit is reported as disintegrating “meanwhile — as” his body was burnt centuries before the disintegration.

Mostly, this story made me want to read some of the grim weirdness of the very early stories of the Spectre.

But I hafta wonder 'bout guys who fantasized that their troubles with dames stemmed from bein' dead. It's very different from fantasizing about being superior men from other planets, or brilliant and courageous defenders of justice. It's worse, even, than bein' a' android put together by Phineas Horton. “Haha! Little does that beautiful little fool know that I'm dead!”

Daniel, considering some of the morbid grrls I have known, being dead would probably have been an advantage in a relationship.

Thanks for your note and, as always, your insightful observations.

And that's why nobody gets to wear a monocle anymore! Thanks 40s comic villains and Colonel Klink, for ruining it for the rest of us!

(Why a monocle would have ever been in fashion is one of those mysteries of the past I have never had satisfactorily explained to me.)