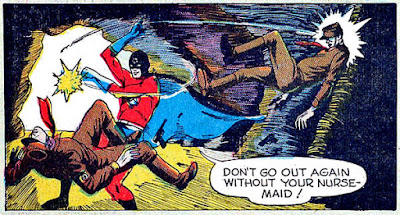 Archie Masters, a “timid, cautious astronomy professor” is American Crusader (Public Domain Super Heroes.) This particular story features giant mushrooms and a plot to force the Americans to end the draft of young men into the armed forces. It also features a long-haired, bearded “Old Man of the Mountains,” who wants to end wars. With those elements, this story, from Thrilling Comics #23 (1941) could have been re-worked in the sixties. Sinister Nazi saboteurs are actually behind the plot, and two-fisted super patriot American Crusader kicks butt. 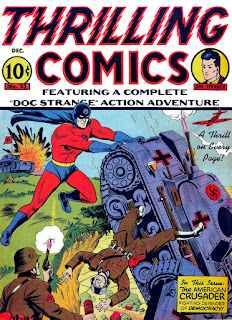 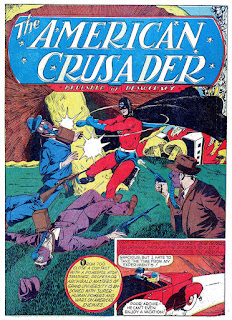 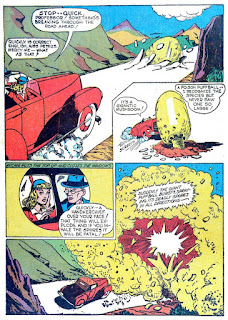 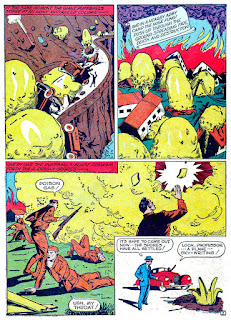 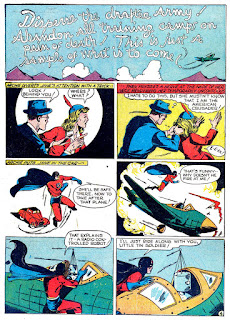 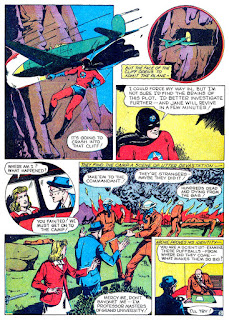 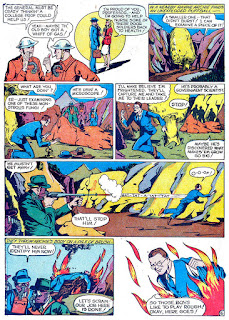 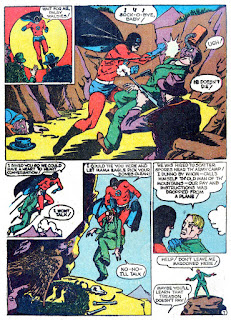 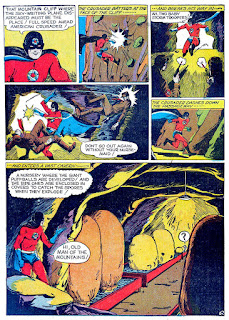 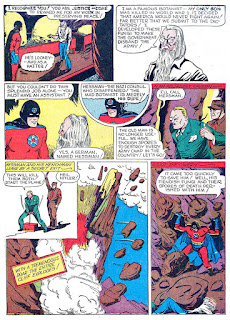 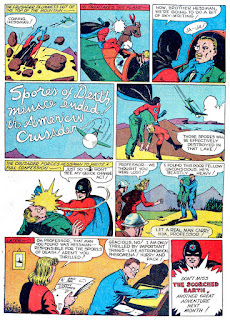 Tomorrow is the annual Pappy's Turkey Awards day, where I show the most offbeat comic book story I have read this year. Visit tomorrow and see if you agree with me. But whether you do or not, if you buy SUPER WEIRD HEROES, the newest entry in Yoe Books’ attractive and enjoyable comic book history, you will admit it is aptly named. 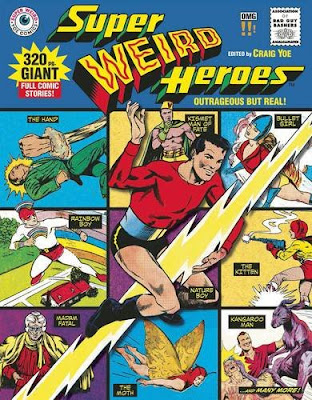 There are 40 superheroes (in Volume 1...Volume 2 is still to come) and all of them qualify as weird. A couple of the stories have appeared in this blog, but in the Yoe book you get them on fine paper for permanence.

I believe I share the same eye that Craig has for the oddball and strange in comic books. And that is a medium that, especially in its early days, rolled out comic books which had 64 pages to fill,  often using some mighty screwy material to fill those pages. Consider Fantomah, the jungle girl whose face turns into a skull. She was the creation of Fletcher Hanks (here as "Barclay Flagg"), and Craig shows an early Fantomah strip by Hanks in the form of original art. That is rare; not something you will see every day.

Some other weird heroes I enjoyed reading about in the book are the Black Cobra and the Cobra Kid, Hydroman, Fire-Man, the Hand, Kangaroo Man, Spider Widow...the list goes on. I spent an evening in a state of sheer joy, reading one amazing story after another — and that is testimony from a man who reads old comic books every day of his life.

As with all of Yoe’s books, attention is paid to even the smallest detail. Craig and his wife, Clizia Gussoni, are partners in their endeavors, and the result of their professionalism and love for comics shows through in every book they produce. Despite the weirdness of the characters in SUPER WEIRD HEROES, by including them in such a beautiful package Craig and Clizia have given these often laughable superdoers dignity they could not have hoped to have had in the old cheaply printed and disposable comic books of a couple of generations past.

I'm amused by the presumption that an astronomer can readily handle the challenges of mycology, as if there were no difference in the appropriate base of knowledge. In sad truth, on top of not having the right sort of knowledge, the typical person with a degree in science and a position as a scientist actually isn't even very good just at applying the scientific method outside of his or her ordinary field.

But apparently Doc Masters is at least somewhat expert in poison puffballs, the dispersal of their spores by the wind, and the reaction of the spores to contact with, uhm, water. Still, I'm not sure why there apparently were nothing to fear from the spores dispersed by the eruptions of the puffballs that grew from the spores distributed by Hessman.

As I've explained elsewhere, conscription is a form of taxation, and one of breath-taking, terrible inefficiency. An all-volunteer military of the size and for the purpose desired by political leaders might require greater overt taxation, but that taxation can readily be far less than the implicit taxation of the draft.

Daniel, the term "scientist" in old fiction implies that the person with such a job title has universal knowledge of science: mix chemicals, build a rocket ship, etc.

Thanks for the link to your article on conscription. I wrote, posted and then deleted a longer answer to your letter, but thought twice about it. Suffice it to say I think conscription is a bad way to get people to fight wars, and when the true costs are figured it costs more than it's worth, both in money and other, personal costs. When a government has to hold the threat of imprisonment up to get someone to comply to a conscription order then it is coercion, with no real choice. Especially when laws are written to help those with wealth to avoid service.