Number 1967: My heart’s in the saddle, but my steering wheel is on the right 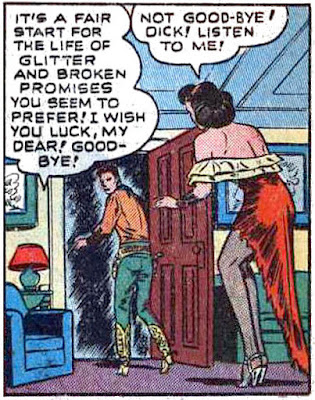 Years ago an art teacher of mine told our class that an artist has to make decisions. Reed Crandall, artist of today’s story from Quality Comics’ Hollywood Secrets #2 (1950), was faced with such a decision. The scripter committed a comic book faux pas with the dialogue of characters in a car, the driver speaking first, the passenger second. Crandall’s decision on how to stage this clumsy situation was to make the car a right-hand drive, something uncommon in America. He made a decision not to show the make of car, just that it is a convertible, more common in Southern California than England or other countries where right-hand drive is the norm.

The story itself is typical of love comics: girl yearns for something she can’t have. In this case it is stardom, but she pulls some dirty tricks to get to her goal, leaving her original love broken-hearted. We find out Walter Prine, who lures star-seeking Joan Lee away from her love, Dick Ashley, is a bounder who may drive on the right, but drives her wrong.

In retrospect, Joan was in one way correct...cowboy movies like Dick Ashley starred in were on their way out. Some cowboy stars adapted well to the new medium of television, but many B-Western movie cowboys suddenly found their stardom diminished or gone by the mid-'50s. I wonder what happened to Joan? Maybe she got parts in the science fiction movie boom of the 1950s...but that would be another story.

“My Heart’s in the Saddle” ends in an act of bravery by Dick, showing up Walter. Walter acts the coward,  stampeding others to get out of a burning building. The cad! A children’s hospital, no less!

We also get some cheesecake, some lingerie panels. In my opinion, Crandall made good decisions on how to handle the art in those scenes. 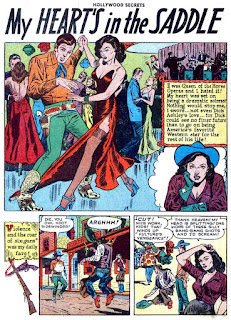 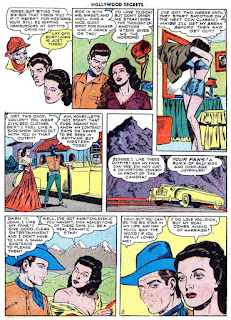 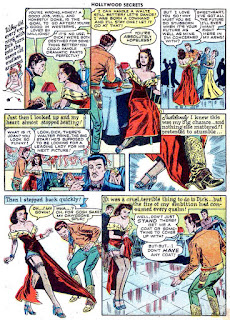 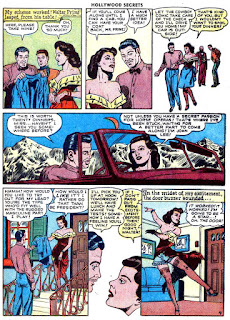 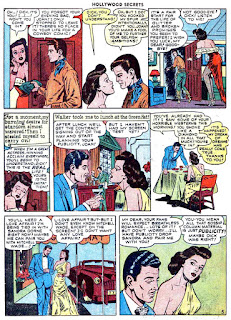 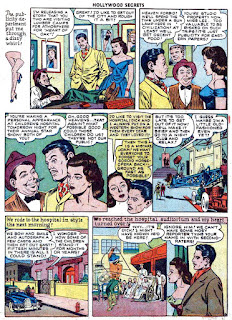 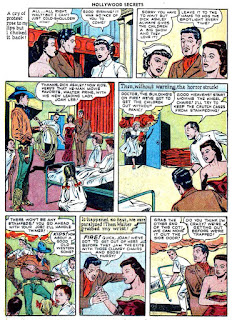 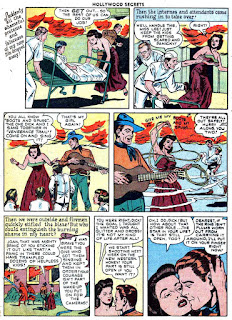 Okay, an interesting twist to the standard fantasy of the undesired male! Now Lois isn't just a fool for failing to see Clark for the man who he really is; she's a fool for making Clark seem to be an awkward clod when she actually knows better.

Actually, though, Dick Ashley falls short of the Curt Newton Standard, as he should immediately have removed and offered his shirt.

Like many people, I have wondered why the Western no longer has the popularity that it once had. Various reasons have been suggested or occurred to me, but one factor that is probably under-appreciated is just the flow of history.

When dime novels and travelling shows first began celebrating what we now call “the Old West”, it was still very much a real thing in time-and-space, and not old at all. When movies first began to be made about it, it certainly wasn't long gone. In 1950, people were about as far removed in time from the beginnings and end of the Old West as we are from the onset of the Great Depression and from the Kennedy assassination, respectively.

Our current understanding and appreciation of the Western thus comes from a very different context than that of boys and girls and adults during the height of the popularity of that genre.

As to that steering wheel, I don't know why Crandall couldn't have given us a shot from behind the seat. But driving an imported European convertible is something that one might have a Hollywood character do.

Maybe it's nitpicking, but it's strange to see the hero of a "squeaky-clean" cowboy series not only shooting his enemy in that opening scene, but actually yelling "Die!!"

Daniel, making the car right-hand drive rather than showing the characters from the back would be a part of the decision the artist would make. That is, unless the scripter put in a description for that panel of the two in a right-hand drive.

I think I have read several articles about why Western movies aren't still popular. I generally like Westerns, some more than others. There was even a series (on PBS?) called The West of the Imagination, which showed that much of what we think of when we think of the American West is a myth.

Another documentary, or maybe it was part of the same one I remember, had a fascinating idea that at least one cliché of Western movies, that someone rich and powerful is lusting after and stealing the land of honest, hard-working folks is actually re-telling the story of the men who made the movies. Most of them were Jewish, and their families had been through pogroms. They had their land stolen from them, and innocent people were killed. Since the subject of Jews seldom came up in those early Hollywood days, they used the Western movies to tell their story.

For anyone interested, I recommend True West magazine. I'm a subscriber; they not only tell stories of the real West, but also the "reel."

I'd like to add to Daniel's comment. A while back I saw a movie on TCM, the name of which I unfortunately can no longer remember, that was a western made in 1950. The opening voiceover narration (onscreen you saw a wagon train going through a mountain pass) said it took place "70 years ago", meaning 1880. To put that in context, 70 years subtracted from 2016 gives us 1946, right after World War II ended. While they may not be as plentiful as they were in, say, the 1960s, there are still movies made that take place during World War II. And their are still people alive who remember World War II. Very elderly of course, but people at least born in 1946 are only just now reaching 70. Now, let me go to a western movie actually made in 1946, the title of which I CAN remember, Duel in the Sun. That film had Lionel Barrymore in it, who was 68 at the time. Had Mr. Barrymore been raised in the West instead of the East, he would have experienced the waning days of the Old West. Even in the East, he still grew up in the horse-and-buggy era (that term itself was invented by people living in the early automobile era to describe a past within living memory; we don't use the term very much any more because if you think about it, the horse-and-buggy era actually goes all the way back to Ancient Egypt!) I find this rather mind-boggling as Barrymore was now appearing in a Technicolor movie about the period. We like to think of ourselves as living in an era of rapid technological change, what with the Internet and all, but I really think it's nothing compared to what Barrymore would have experienced in the first half of the 20th century.

Grant, I believe that the dialogue in that case was more 1949 comic book than 1949 movie dialogue. I missed it totally, so thanks for pointing it out.

Kirk, I think in this era we are more used to rapid advancements in technology, taking it for granted, really. But I accept your analogy of Lionel Barrymore experiencing more of the shock of the new in his lifetime, because up until the 20th century progress was measured at a snail's pace.

A person born in 1900 and living a full lifespan (about 75 years), would have lived through man's first heavier than air flight, and the moon landing.