Number 1974: Gotta have gimmicks: the Ibistick and the Magic Snoot 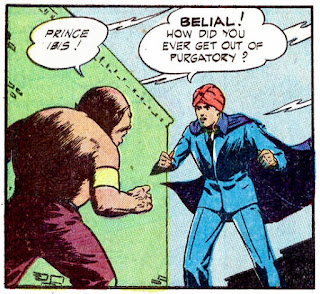 Magicians in the comics had to have a gimmick. For Prince Ibis, who came back to life with his girlfriend after 4000 years as Egyptian mummies, it is the Ibistick, a magic wand that vibrates when evil is near. In the case of Basil Wolverton’s funny character, Mystic Moot, it is his nose that is the source of his magic powers: “I’ll simply point my snoot at your loot!” he tells the bad guy.

These stories are both from Ibis #3 (1945). According to Comic Vine, Mystic Moot was a parody of Ibis. This story is his introduction, the first of 13 stories Wolverton did of the character. It is full of his usual funny drawings and Basil’s word play: alliteration and internal rhyming.

The Ibis story, credited to Bill Woolfolk for the script and Gus Ricca for the artwork, looks like it was inspired by the 1942 Val Lewton movie, The Cat People. But then, stories of humans shape shifting into animals probably go back as early as the time our distant ancestors first sat around campfires telling stories. This story also has that comic book property of mixing religion into the plot. In this case using Purgatory (Catholic) and Belial (Hebrew). 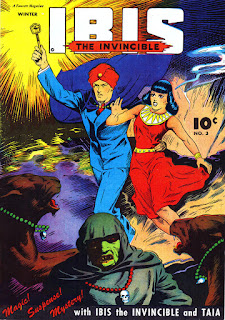 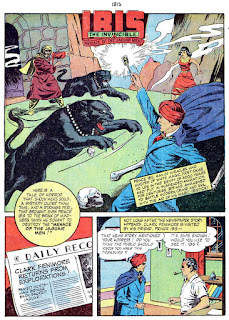 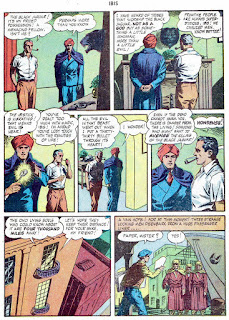 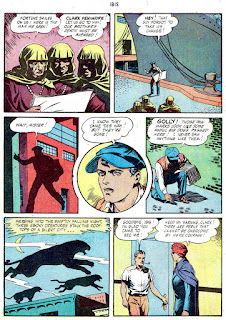 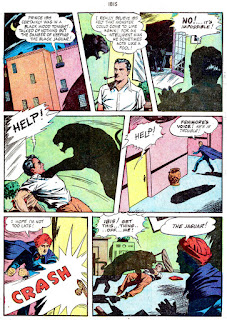 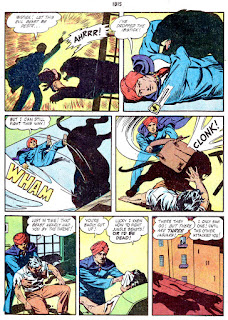 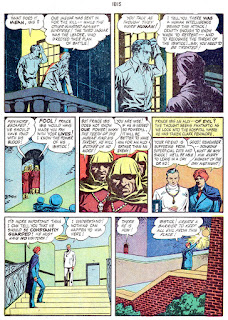 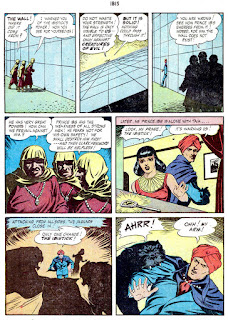 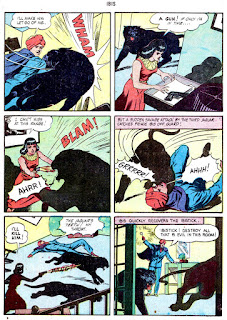 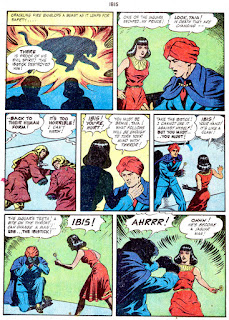 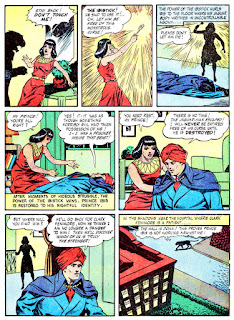 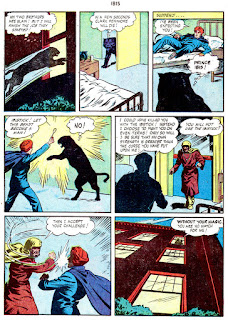 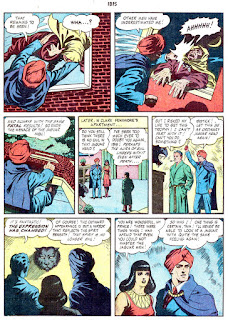 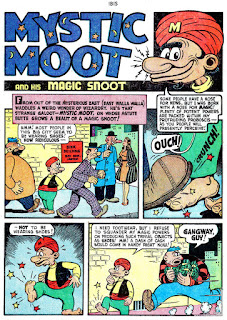 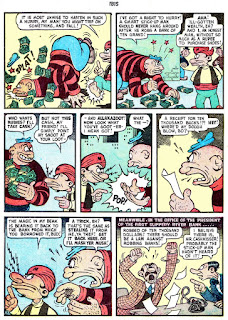 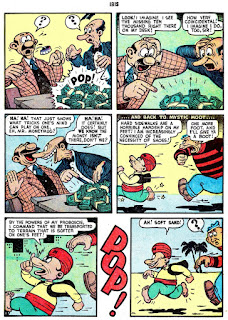 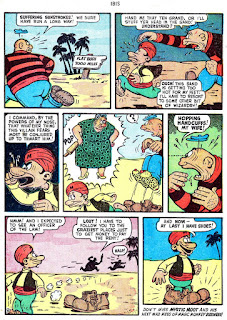 The Ibis story is very nicely illustrated, but has the usual problem of stories about a character in possession of so much power — namely that, were he to use his power to best effect against villain such as these, the story would quickly end.

Wolverton was probably acutely aware of this issue. (H_ck, everyone at Fawcett and his or her sister was probably acutely aware of this issue!) But had he satirized it full-bore, then his stories of Mystic Moot could not have been published without seriously under-mining the interests of his publisher. Still, Moot too proceeds with round-about, piece-meal conjurings until finally the menace is brought under control.

Oh Prince Ibis, you dope. "Hey, Ibistick, merge with me" and "Hey, now magically powered me, turn into superman." How hard is this?

I love the rational hunter, and how he poo-poos a man who obviously, and demonstrably, has magically powers! I do have to say this is my favorite Prince Ibis you've shown, the jaguar men actually get the upper hand, if only for a split second. Then, of course, he just punches one out a 20 story window, but they at least have their small moment of victory!

Oh yeah, "Hey, Ibistick, protect me from getting cursed." Yeesh.

(BTW, I can see somebody saying "but you can't use the stick on yourself." Just get Taia to do it!)

I sometimes think while reading such stories if I were writing the story what I would think of to have the character do in such a situation. If, say, confronted by a tidal wave Prince Ibis has to immediately think of what would be best in that situation, "Send me to higher ground!" or "Send me to the middle of the Sahara and away from water!" My plot would be dull as dishwater, because I'd probably have Ibis say, "Take me back home, sit me in my easy chair so I can watch the story about the tidal wave on the evening news."

Luckily, Wolverton didn't have to worry about his comedy character doing what would seem logical or sensible in a time of danger. He just had to be funny.