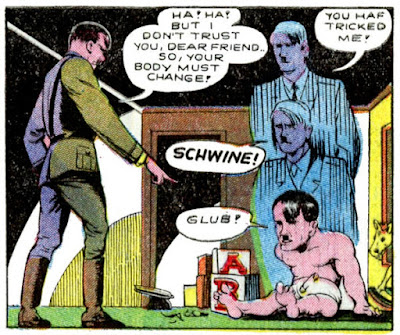 Today is Thanksgiving Day, the American holiday where we are thankful for mass quantities of food. It is the time when I issue my self-proclaimed Turkey Awards. After skipping this event in 2014, the tradition is revived, at least for this year. I have found a story I believe qualifies as the most oddball story I have encountered this year.

Dr Miracle, yet another of the glut of early comic book magicians based on Mandrake, has a Ouija board that acts like an iPad. It has a screen that reaches to Hitler’s home in Berchtesgaden, and at that very moment he witnesses — coincidence of coincidences! — the takeover of Hitler by “the Egyptian Satan,” Set, who wants to ensure all the war dead will be his slaves in the afterworld. Whew. I found it hard to even synopsize that much. The rest of this crazy story is up to you.

For all of those outrageous qualities, even during a time of war and the demonizing of the enemy’s leader, this story earns three turkeys.

Alex Blum is credited by the Grand Comics Database with the artwork. The story is from Champ Comics #24 (1942), published by Harvey Comics. 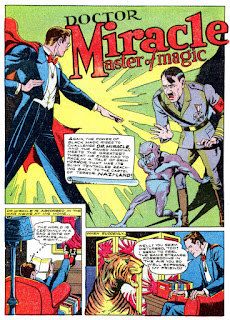 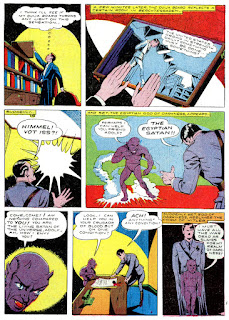 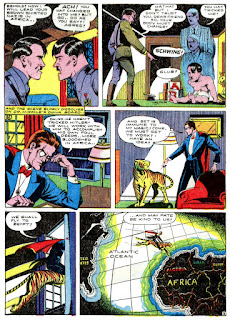 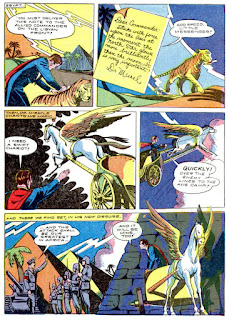 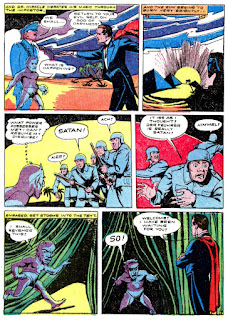 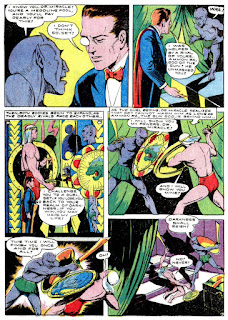 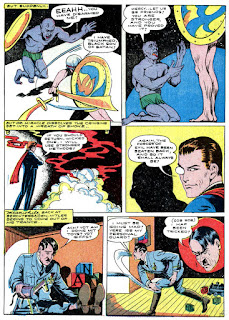 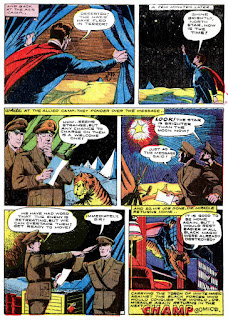 To see the past winners of the Thanksgiving Turkey Award go to this entry from 2013. It will guide you to past winners going back to 2006. Just click on the thumbnail. 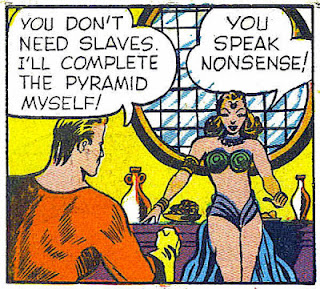 This is one wild turkey!

I'd like to report another interesting story where Dolf is depicted as a "G_d of Evil" of sorts: in fact, he is Satan:

This story was reprinted (in B/W) in a 1992 miniseries called "Anti-Hitler Comics" (New England Comics). In a very intelligent article, editor George Suarez compared two stories, to show how the "perception" of Adolf Hitler changed from 1941 to 1943 (from a buffoon to a very serious threat). The first story in that book was "Futuro Kidnaps Hitler" (you have posted and reviewed it).
I like this Hitler-Satan story, it shows us the "alternative" Unknown Soldier from Ace Magazines (first presented in "Our Flag")

If you have, by chance, already posted the Hitler-Satan story... sorry. :)

J D, somewhere in my storage is a copy of Anti-Hitler Comics from NEC...I haven't looked at it in years, so with my memory being what it is, the story seemed new to me.

I don't even remember any other Hitler as Satan stories I've posted! I have to research them via the search engine.

I'm not sure an analysis of Hitler being seen as a clown could have been universal in 1941. Charlie Chaplin did a good job in The Great Dictator, but since there is a large Jewish population in the United States, there were terrible stories coming out of Europe about displacement and harassment of Jews still living the old country, not to mention outright murder. Many people did not see Hitler as a clown. Since many comic book people were Jewish they jumped into the anti-Hitler stories early on. Simon and Kirby had Captain America clobbering AH on a cover months before the U.S. and Germany commenced official hostilities.

Comic Book Resources has an interesting article by Brian Cronin about threats to Simon and Kirby from Nazi sympathizers, told here.

I'm thankful for Pappy's Turkey Awards, especially since there was no entry last year (Frankenstein--Hmph!). But I'm afraid I can give this story only two turkeys; it's not quite weird enough for me, and definitely not up to your past entries. Still, there were some things worth commenting on: If Doctor Miracle could whip up a flying chariot, I bet he could've materialized a messenger who wouldn't have scared the $h!t out of the army like that tiger. Also, once the caption said that Miracle couldn't be defeated while Ammon-Ra supported him, I knew it was over--Set didn't have a prayer, even an Egyptian one!

I'm surprised Cronin didn't mention the cool story about the time Kirby got a phone call that a bunch of guys were downstairs waiting for him because they didn't like his Captain America. So, Kirby said he'd be right down, rolled up his sleeves, and strolled downstairs. The group was gone.

Ryan, it was true in 2014 that I found no story worthy of my turkeys as those I had posted in years past because I thought I had seen it all, and was no longer able to properly judge a truly oddball story.

Despite those feelings this year I did perk up and take notice of this Hitler-Set story, and in my opinion it matched the style and mood of stories from the past postings, but apparently fell short in your estimation.

That is to be expected, and I don't expect to be right all the time, especially in something as subjective as this choice. I choose to live with it, and hope that any future postings are more to your liking.

Kirby described himself as growing up fighting in the tenements of New York. Kirby was not a big person, and reminds me of the description I heard once of aggressive dogs (not comparing Kirby to a dog, Kirby fans...don't get steamed)...an aggressive dog doesn't know what size he is. I suspect Kirby, having met many of life's challenges, was someone who would not have backed down from a confrontation, even one as potentially threatening as men in the lobby waiting for him, because he did not consider his size to be a disadvantage in a fight.

Maybe the most interesting part is those soldiers deserting, but not because of the enemy, because "HE is really Satan!"

Even now (as far as I know), you don't see many anti-Hitler Germans in stories unless they're a big plot point in the story. And I imagine it was that way in stories all along. Even though it's for a big supernatural reason, it's funny that these soldiers just desert without a second thought.