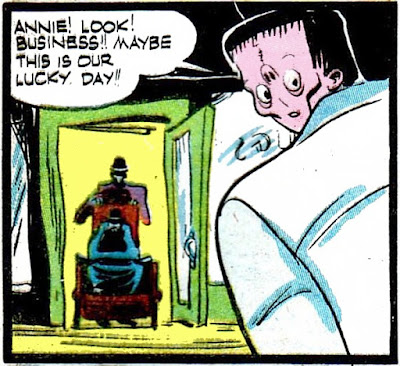 After an absence of a few months, Dick Briefer’s Frankenstein is back with a tale of a medical miracle. “How I Conquered a Terrible Plague” is from Frankenstein #5, 1946.

Too bad we didn’t have Awful Annie to whip up a cure when a terrible plague, Ebola, was frazzling nerves all over the world.

The Digital Comics Museum has a notation that these are “Pappy scans,” so I need to correct that. The scans were not donated to the DCM by me, and I do not own the comic book from which the scans were made. Whoever did the scanning did a nice job. I would like to thank them for making my job a lot easier, and if possible give them the credit incorrectly given to me. 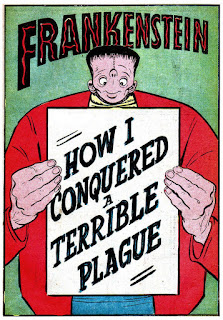 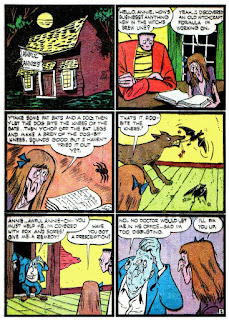 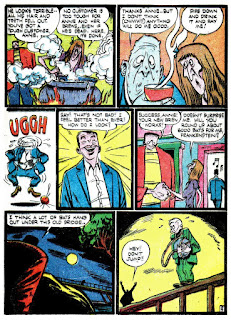 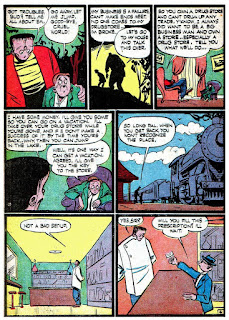 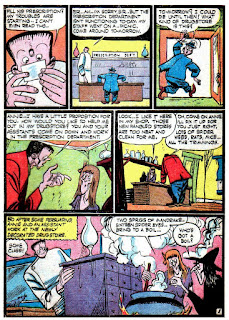 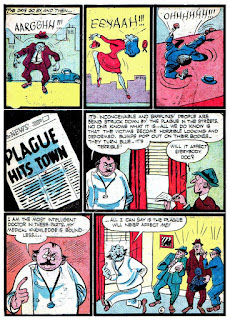 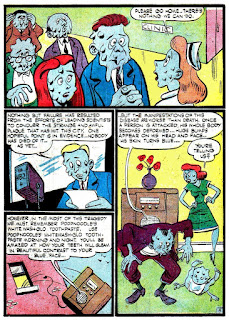 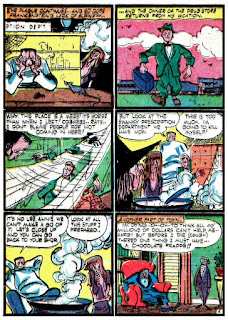 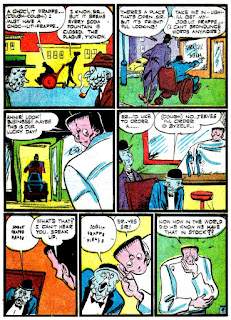 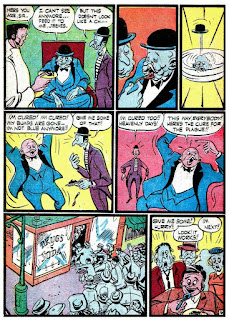 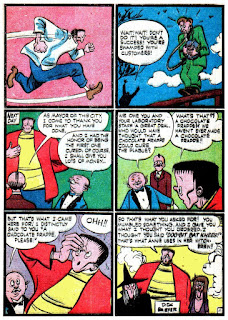 Given that Ebola hemorrhagic fever was probably first contracted by human consumption of bats, it would seem a double injustice to the bats were it cured with Annie's terrible brew!

It occurs to me that Superman, in that span right after he stopped being a Nietzschean fantasy, and Briefer's Frankenstein, in that span when he was comedic, were very similar characters. Remove the references to witchcraft, and one has a Superman story here: Pharmacist is overwhelmed, hero takes on pharmacist's burdens for a time, major community problem just happens to occur, solution just happens to be at hand because of the hero's having taken-on those burdens.

5:6 slips-in a pun that might not bear too much thought. (Ewww!)

Page 2, Panel 4 almost ruined the story for me before I even got into it. I'm a big animal lover, and the sight of the poor bat with the wobbly legs was so sad. Then I reminded myself that it was a cartoony comic book and that no bats were harmed in the making of it. So, it was a funny story, after all. Not only that, but, as Dan Nadel put it in his book Art Out of Time, the drawings themselves are "inherently funny." And, speaking of funny, you know what you don't see as the catalyst for a comic story, especially a funny one, these days? Attempted suicide! That gambit definitely played the field in its day. In fact, when I first saw the last panel of Page 3, I actually thought of the Golden-Age Superman! Jerry Siegel used that bit more than once as a plot kick-off. Anyway, aside from his ability as a gag writer, Briefer was quite a good artist, and I don't know if I really appreciated that until this story. Just Page 4 alone is a great showcase for his talent, with the variety of compositions, the use of silhouette, and even the apparent casual ease with which he drew the train. It's a damn shame he got out of the business after Frankenstein was cancelled, and it's somewhat ironic: it seems he left because horror comics had been shunned, but his comic skill would have fit in perfectly during the gentler Silver Age.

Ryan, Daniel, it's interesting to me that you both refer to the early Superman in your comments. It is a connection you both saw that I didn't.

Daniel...Ebola from eating...bats? Good ghod, I hope I never get that hungry.

Ryan is very right on Briefer's "casual ease". To me, his art on 'Silly Frankie' always gives the feeling of something bashed out quickly, but there's a lot of research behind.
Amazing how different is the feeling, looking at his grim, ponderous art for the 'Serious Frankie'.

Pappy, are you good with the updated credit at the Digital Comic Museum for the issue?

Eric, thanks. I hope the real scanner steps up and takes credit.