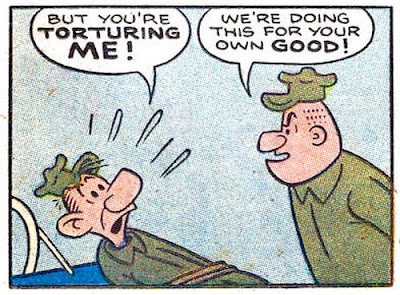 Sad Sack was created by George Baker during World War II for an Army newspaper, so the strip was aimed at male adults. The Harvey comic book was sold along with their line of comics for children, but sometimes had more adult themes. These three stories show what I mean.

“Cold World,” (Sad Sack #107, 1960) the torture story, is real dark humor. It ends in Sack being egged on to commit suicide! Definitely not one for the kiddies. To add to Sack’s misery, he even gets his dog taken from him. “They Laughed” reminds me of my favorite fantasy when I was a U.S. soldier in Germany during 1967 and 1968. Sack gets lucky. I didn’t. Then there is “The Dope-Offs.” It’s about soldiers malingering (a punishable offense), and includes a performance by “Marilyn Mulroe” doing a sexy dance for the guys in the hospital. The latter two stories are likely reprints. Marilyn Monroe had been dead for 7 years when the version I scanned was printed. Both it and “They Laughed” were printed in Sad Sack Laugh Special #4 (1969). 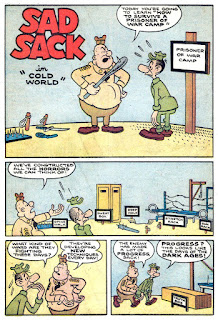 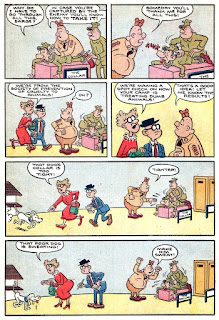 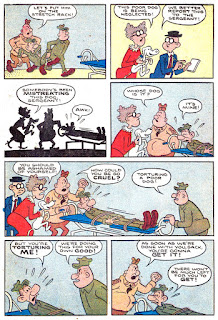 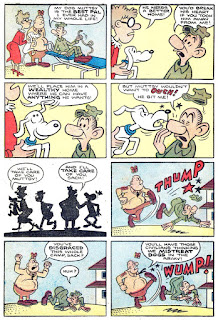 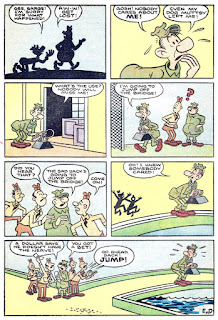 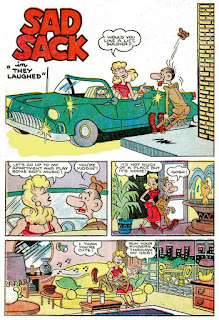 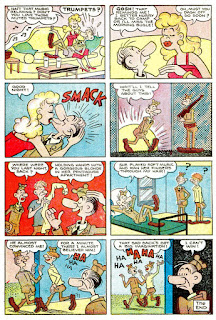 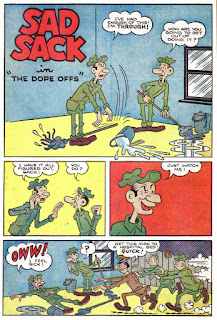 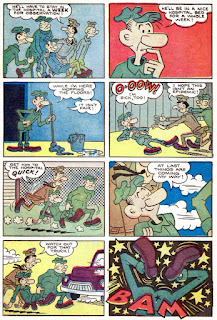 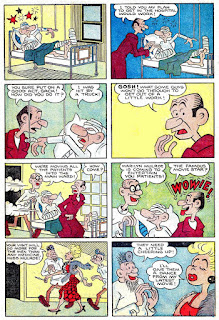 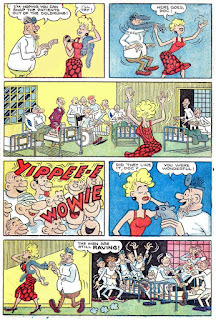 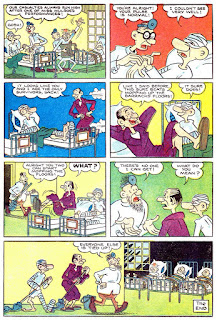 The sad story of Fred Rhoads after years of drawing Sad Sack. Click on the thumbnail, soldier. 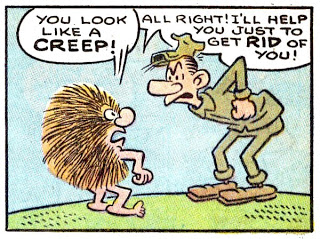 So, if I understand well, this is the heart of the matter in a nutshell:

"I told him, I said, 'I just left this job with Mort and he offered me ten percent of everything he is going to have in his two strips. And, I just want to know where I stand.' As a matter of fact, I said, 'Can we have a contract?'
He said, 'FRED, YOU DON'T NEED A CONTRACT. YOU ARE AN EMPLOYEE AND EVERYTHING IS GOING TO BE FINE, and you can go to Florida or anywhere you want to go, just so you mail your work in and get it in here on time', like I was doing in Connecticut. […] The appellees concede that there is no direct evidence that Harvey knew that Rhoads believed he could not have retained rights in his work if he were an employee. They argue that this element of fraud […]In other words they argue, why would they tell him he was an employee if they did not know, or have reason to know, that he believed an employee could not copyright his work? The law does not permit such a speculative leap.
GIVEN THE FACT THAT THE VOLUME OF WORK ASSIGNED TO RHOADS KEPT HIM BUSY MOST OF THE TIME, A SCHEDULE INTENDED FROM THE BEGINNING, IT ONLY MAKES SENSE THAT HARVEY WOULD REFER TO HIM IN A FRIENDLY, NON-LEGAL SENSE AS AN 'EMPLOYEE'. In the context of the conversations to which we have referred, it would have been most unusual for Harvey to have referred to Rhoads as an 'independent contractor' or a 'free-lance artist'. As the appellants argue, one would be amazed if Alfred Harvey had said, 'Welcome to the Harvey family as an independent contractor'.

Finally, the appellees present as a cross-issue the trial court's dismissal of their count in constructive fraud. It is the appellees' position that a confidential or fiduciary relationship existed between Rhoads and the Harveys. Based upon that alleged relationship, they contend that the Harveys breached their duty to make a full and complete disclosure to Rhoads concerning his right to retain an interest in his art work.
From the record WE CAN SAY AS A MATTER OF LAW THAT NO CONFIDENTIAL RELATIONSHIP CAN BE FOUND TO HAVE EXISTED BETWEEN THE PARTIES."

He might not have known how other publishers treat their free-lancers. When a group of old-timers at DC demanded in the '60s they be given health insurance they were sacked. It was a rough business to be in. I am somewhat amazed at Rhoads' naïvete, but if he had no business manager or someone to handle his taxes, he just might have been oblivious; one of those people who have an idea in their head that despite external evidence is completely off-base.

I think his long-distance relationship (he lived almost 2,500 miles away from the company headquarters) might have contributed to his misunderstanding.

Damn shame, because Fred Rhoads was to Sad Sack what Carl Barks was to the Disney Ducks.

I met Fred Rhoads at a San Diego Con some years ago. He was gregarious, generous, (He was selling original color drawings of Sad Sack for $5.00 apiece!)and flirty. Whenever I passed by he would be chatting up cute girls, in his western suit and cowboy hat. He was there for a couple more years then he stopped for health reasons. Nice, funny guy.

Mario, had I seen Rhoads at a Con I would have been in line to buy one of his drawings. And good on him for chatting up the chicks. A guy who spent as many years as he did at a drawing board deserves to get out and howl at the moon occasionally.

"The Dope-Offs" was drawn by Paul McCarthy, I don't know who scripted it. Probably either McCarthy himself or George Baker.