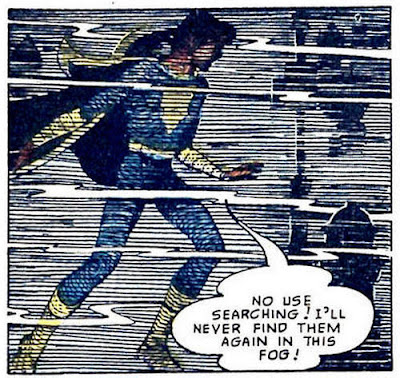 Freddy Freeman, the “crippled” newsboy who is also Captain Marvel Jr, is innocently peddling his papers when he spots some odd-looking fellows. He yells the magic word, becomes Junior and grabs one of them, only to exclaim, “He feels just like a mass of fog!” Freddy’s super powers must give him extraordinary ability of touch. I have been in a lot of fogs and have never been able to feel it except as water droplets. I don’t have a magic word, so I’ll give Junior’s tactile powers the benefit of the doubt.

The whimsical script gave artist Bud Thompson a chance to do a little experimenting with the look of the fog men. I find it a fun mix of cartoon exaggeration and Thompson’s more straight superhero-cartoon style of the era. 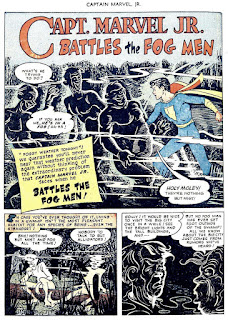 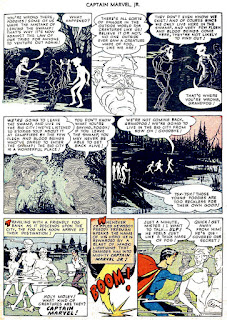 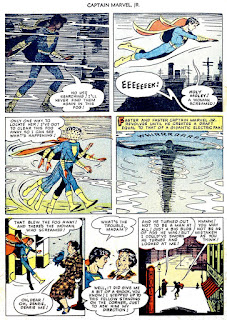 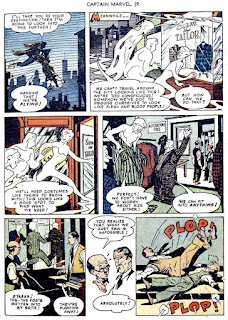 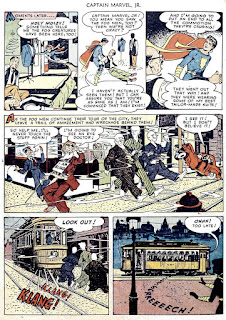 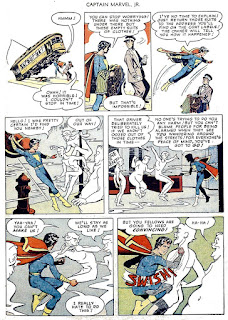 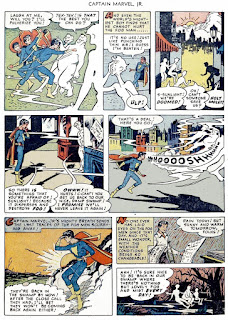 Freddy felt compelled to change to CMJ in order to "talk" with the fog men, just because they were new creatures to him. Would that be considered racial profiling? Or species profiling?

When Thompson depicted the fog men in "negative," how did that work--wash the board in black and then scrape it away to make shading and outlines? I like his experiments with the art, especially the shots of CMJ in the fog. I wanted to learn more about the artist but could find almost nothing about him online, other than in the credits to posted comics. Can you tell us anything about him, Pappy?

The art looks rather old-fashioned, like what one might expect had an illustrator of juvenile books from the '30s turned his hand to comic books. I don't mean to suggest that this is a flaw; it seems quite well suited to one of the less violent CMjr stories!

I'm a bit disappointed that Freddy made repeated efforts to punch-out the fog men (who seem closer to being fog boys than men). And if he could, after all, just blow them back the the swamp, then he should have tried relocating them (to the swamp or elsewhere) with gusts sooner.

I cannot imagine that tailors would have much use for suits that had been hit by a street car.

All in all, this is a story about communication and peaceful coexistence. I'm no expert of the Marvel family but I think this was typical of them, trying to reason with their opponents instead of just beating them to a pulp.

Marvel Jr. is no match for them, but they're not evil, just three little pranksters, like Casper's uncles... he should have met their really evil cousins, the Smog Men.

As for the Fog Men, by means of magic the fattest one finally managed to acquire a human body and went on a career as a lawyer, under the name of "Foggy Nelson".

Daniel, you know the writer had to fill the pages with something, and so an early version of the Marvel Comics effect: When you can think of nothing to say, fill up the pages with fighting.

Yeah, I know...every movie, every comic book, every pulp magazine had fighting. People didn't really sit down and talk much in those days, did they?

J D, ho-ho, good one. Foggy Nelson. Speaking of foggy, that is my brain tonight. See you on Wednesday.

Ryan, I suspect that the negative effects were made by reversing the artwork on a photostat and pasting it down on the artboard, then pasting up the regular positives over the stats. He could also draw it in white paint on black, but it looks more like a negative to me.

As for the artist, not much is said online. If anyone has more information please let me know. I'm always anxious to get artists the credit they deserve.