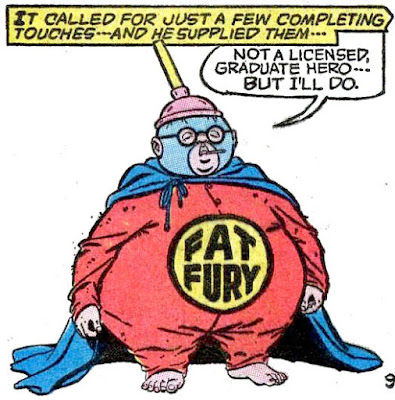 In Herbie #8 (1965), bowing to the popularity of superhero comics and their sixties renaissance, Herbie Popnecker became a superhero called, appropriately, the Fat Fury (aka the “Plump Lump”).

Herbie is a fat kid, and his dad is abusive in his remarks (“Little fat nothing!”), but Herbie is also a very special person. He has very special powers already (levitation, talks to animals, knows absolutely everyone from queens to commoners). Why put him in a costume? Especially one like this? Well, I dunno...I dunno why editor Richard Hughes did many of the things he did, but in this case what he did apparently heightened the popularity of Herbie, even beyond that which had been already achieved. Herbie was a hit from his first appearance in Forbidden Worlds, right through to the end of ACG comics in 1967. If a barefoot Herbie with a toilet plunger on his head, wearing long underwear and a cape increased sales, well, so be it. 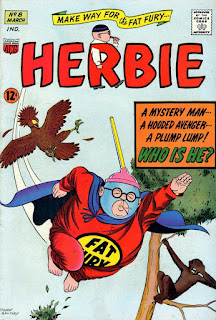 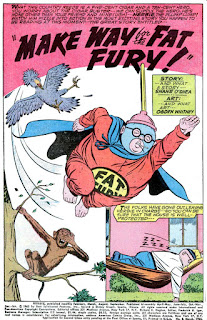 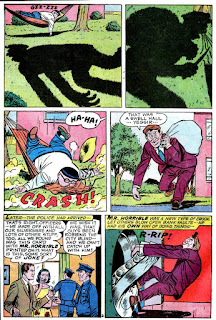 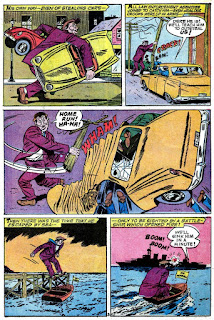 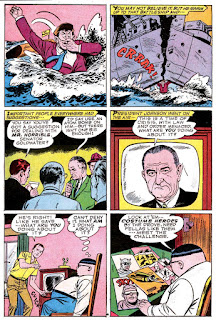 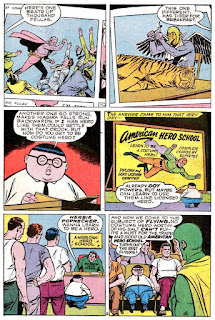 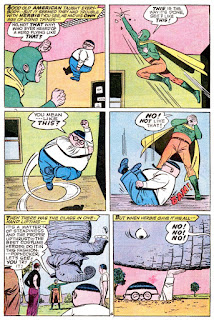 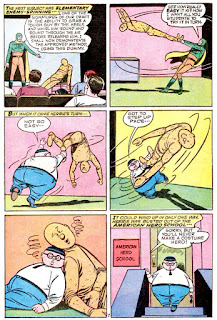 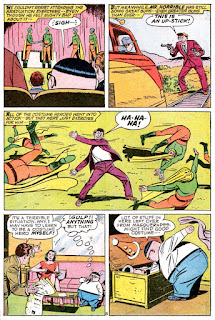 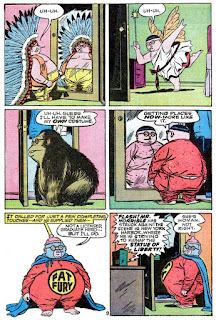 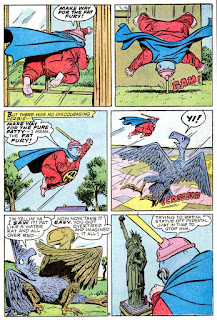 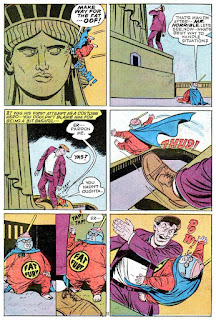 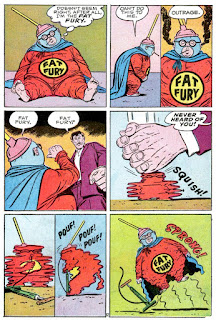 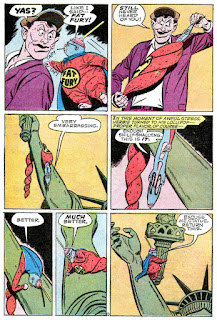 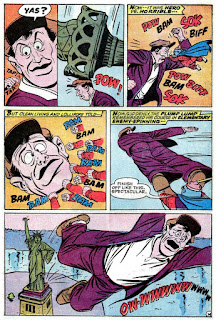 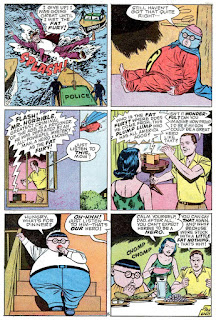 Whitney was apparently feeling nostalgic, as Herbie is plainly looking at pictures that include one or more of the Skyman in 4:6 and another in 5:1.

Cute story, with nice art by Whitney. But I did have one problem with it. I could accept the giant man who could break warships. I could accept the idea that those men could get superpowers just by going to a school. I could even accept the talking birds. But I had to draw the line at Horrible squeezing and twisting Herbie out of all possible shape! We need to have some limits, people! And, was the Statue of Liberty waving at Horrible as he was thrown away??

Our mental attitude has certainly changed singe 1965. Why the silly costume?IMHO, this is not a way to laugh at fat people, it's just a way (and a great one) to spoof the superheroes craze. We should also wonder "Why a fat character?", but it's pretty pointless.
The creators of Herbie didn't have to worry about being politically correct to the limits like we do now. instead, they had the nerve to break a real taboo of their time, (think about Disney) showing the father as an absolute petty, self centered jerk.
The panel with "Carrion Man" having a tiger for breakfast puzzles me. I wonder if it's some sort of joke about something, that was understandable back then but obscure now (at least to me).

That superhero school should lose its accreditation for all the good it does.

Kirk, I haven't checked, but hopefully it was shut down years ago.

Daniel, I'm glad you mentioned the Skyman cameos. When I read my copy of this issue of Herbie in 1965 I did not know Skyman. In re-reading it before making scans I was delighted to see how he was worked into the story. He may have been dear to Whitney's heart. After all, he was the one superhero Whitney drew for almost a decade in Big Shot Comics. Did Whitney draw any superheroes between Skyman and a turn at Tower Comics in the mid-'60s?

J D, the tiger-eating is obscure to me, also, unless it is a satire on a breakfast cereal promoting cartoon character, Tony the Tiger. His catchphrase was "Kellogg's Frosted Flakes...they're G-R-R-REAT!"

Ryan, "Give me your tired, your poor, your huddled masses yearning to breathe free...but goodbye and good riddance to Mr. Horrible."

With Herbie we have to suspend disbielf. He exists because he is funny. Trying to explain or find logic ruins it. Herbie plays on our feelings of vulnerability. We all sense that others see us as weak, but underneath it all we think that we are are really super heroes. I remember a friend of mine in high school saying that the girls just haven't discovered how cool he really is. It was joke, but I think it rings true.

Dave, well said. I wonder if Herbie was created today if he would be controversial. As far as I am able to tell, Herbie is just fine with his rotund physique (and his unique talents). At least he doesn't have body dysmorphic disorder.

Alicia,Christy is another guy without dysmorphic disorder.