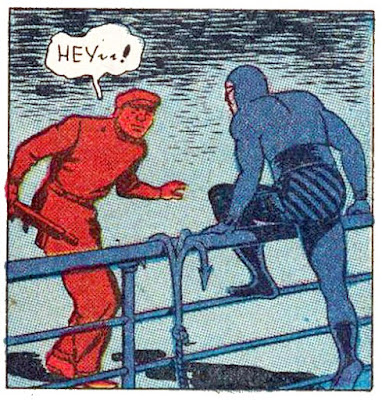 This Phantom story, originally published in newspapers in 1954-55, was titled “Aboard the S.S Gay.” The S.S. Gay is a cruise ship transporting a gangster who has been deported from the U.S. No port will accept him so he and his men take over the ship.

He and his gang are able to take the ship, but keeping it is another matter when the Phantom sneaks aboard and starts messing up their plans. Hence the title, “Hoodoo of the Pirate Ship.” Fighting pirates is the Phantom’s original purpose. Four hundred years ago his ancestor was attacked by pirates and vowed to get revenge. It is a long time to hold a grudge, but those men who became the Phantom, one after another for centuries, are devoted to their purpose.

The story was reprinted in Harvey Hits #44 (1961), written by Lee Falk and drawn by Wilson McCoy. I wonder why their names are deliberately left off the reprint. Were Falk and McCoy paid for reprints? Or was it a form of piracy on the part of the syndicate to get money without sharing it with the character’s creator? I don’t know, but if that was the case someone might have deserved the imprint of the Phantom’s ring on their jaw. 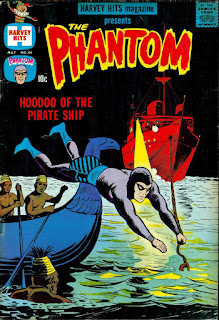 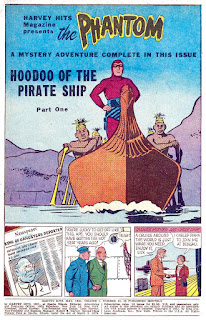 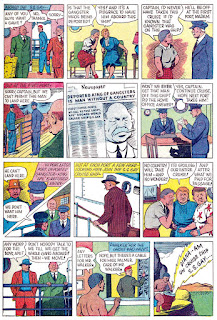 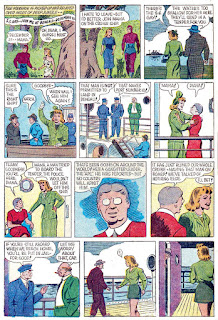 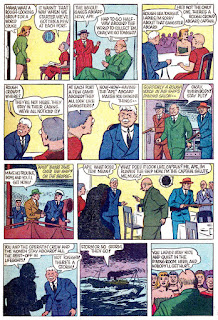 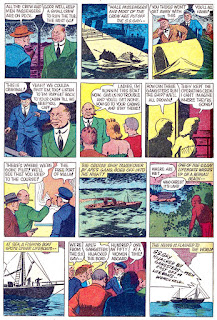 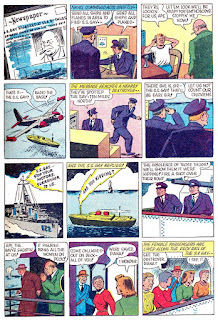 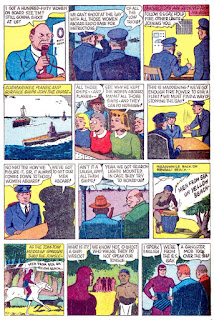 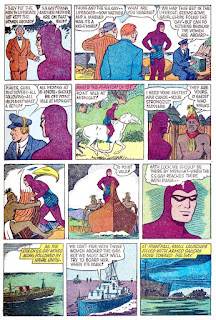 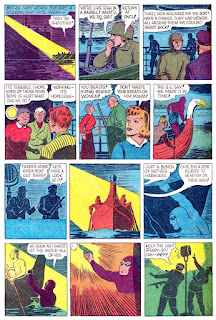 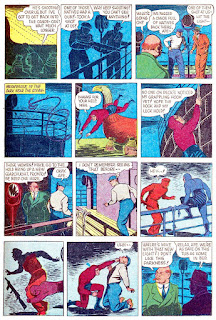 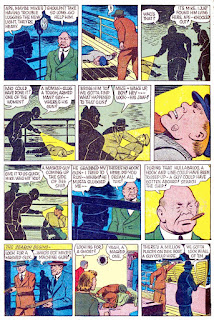 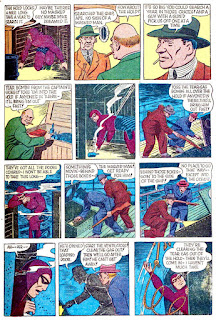 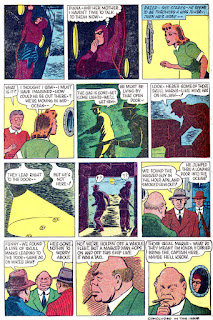 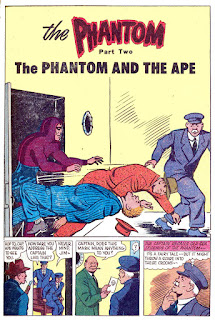 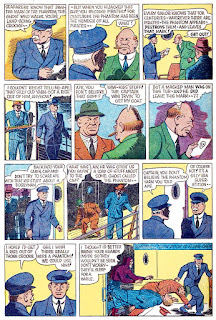 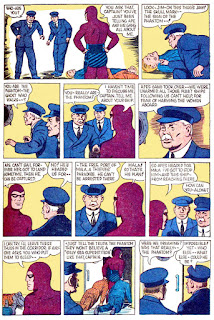 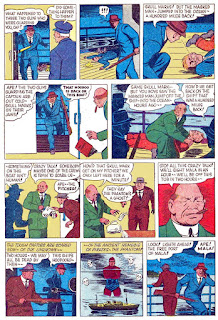 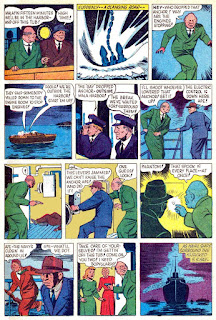 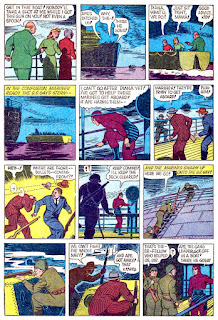 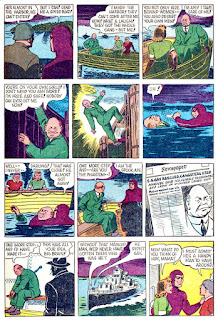 There are, of course, questions as to why the honest passengers didn't disembark much sooner, demanding refunds; and as to why ruthless thugs didn't threaten themselves to kill passengers, as opposed to simply using them as shields.

There's the question of why Ape didn't just bribe officials at some earlier port-o'-call, why an understanding that he'd proceed on to Mala.

But I want to know whether the Phantom put a skull mark on Mama's jaw, for luring Diana into danger.

This comic was the first Phantom comic I ever bought and influenced me by its simple art style.I was a big Raymond/Caniff schools fan, but this stunts and grunts style of writing and art enthralled me and was a staple of my stack of comics by the bed along with the various DC and Dell titles of the silver age.
Lee Falk's writing always tickled me, "Jungle legend: Phantom is rough with roughnecks!"
Great stuff Pappy!

That was really good! Great plot, pacing, and characterization. Reminded me of one of those terrorist hijacking flicks, and it was at least as well done. Of course, it only worked so well because it had been a strip and thus had the space to breathe. Quite enjoyable.

Daniel, I don't have the daily continuity to compare it to, but how do we know what you asked didn't happen, and was edited out for the comic book version?

In those more innocent days, would hijackers have threatened to kill hostages? I think King Features Syndicate (and for the comic book version, the Comics Code) might have had problems with that...not to mention the thought of klopping Mama Palmer on the jaw for leading her daughter into such a dangerous situation. (One is left to wonder, if Diana had not been directly involved, would the Phantom have interceded?)

Mario, I bought the Phantom comics when they came out, and had the privilege also in the 1950s of reading the daily and Sunday Phantom in my local Seattle newspaper. Since Harvey Comics published a monthly Dick Tracy comic I wished they would have done the same with the Phantom. I wonder why they didn't? (Rhetorical question.)

I also had Flash Gordon, Mandrake, not to mention King Features' stable of humor comics (Blondie, etc.) I took them all for granted, not realizing how good I had it!

Ryan, sometimes I think Falk's daily continuities got dragged out and repetitive, and editing them for the comic books cut the constant rehashing of what was going on. As I told Mario Hernandez I read these strips every day in the 1950s and loved them. But I wondered why Lee Falk kept repeating. I guess what I'm saying is I liked the comic books for being concise.

Ape's gang seems kind of low-key compared to today's terrorists, but that is an observation in retrospect.

For what I can recall, the Phantom's stories actually were a bit repetitive, compared to Mandrake, for instance.
To me, L'uomo Mascherato was the weakest of the great golden age characters who appeared in the Fratelli Spada publications (with the possibe exception of Tim Tyler's Luck).
Also, he had to share the spot with Gordon, Mandrake, Rip Kirby, X-9 etc.
McCoy's art doesn't exactly shine like a diamond when put next to Raymond's or Davis' work. I came to appreciate his "stunts and grunts style" (cool definition) only as an adult.

Was it common practice to deport gangsters, and without previous arrangements with the authorities of supposed destinations? And what about using Love Boat to do it? No Con-Air?

"Put a skull on mama's jaw"... Naughty, naughty. She's a nice lady. She even thinks Phantom's "a handy man to have around"!
Maybe she'll even let him mend a fuse, when her lights have gone...
Actually, Diana is more endangered by going steady with the Ghost who walks.

J D, I just read an online article (from 2008, so may not be in effect anymore) saying that China refuses to take deportees back. Vietnam is the same. Once they have quit their home country the country no longer will accept them. And besides, what country wants a criminal to be returned?