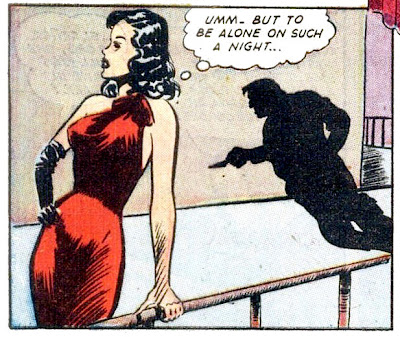 In this 1945 Hooks Devlin story from Fight Comics we see a tattooed woman. In that era tattooed women were seen in circuses and sideshows, not walking down every street in cities and towns, large and small. Times, people and fashions change. Nowadays we don't see men going to circuses or carnivals wearing suits and ties. The difference is, of course, that putting on a suit and tie is temporary, whereas ink on skin will live with the wearer forever. However, not in the case of this tattooed woman in the story. You'll understand what I mean when you read it.

I don’t remember if I ever told you that Señorita Rio was a movie star who became a spy. In this episode she meets up with a young admirer and wannabe movie star, Susy, who helps her.

At the Grand Comics Database art credits for “Hooks” are given as Alex Blum pencils and Al Feldstein? inks. It doesn't look like Feldstein to me. His inking is usually heavier than the thin, slick lines in this story. Lily Renée signed the Rio story. 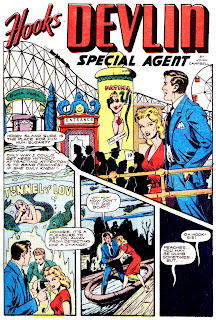 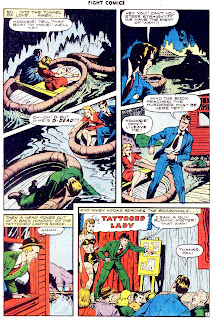 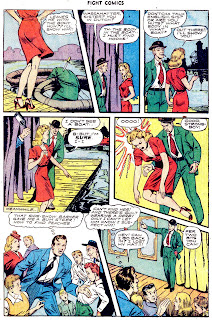 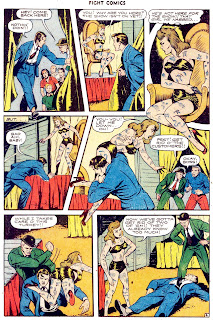 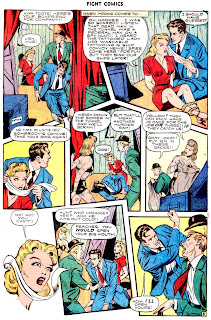 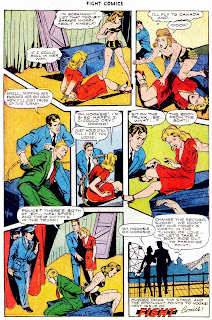 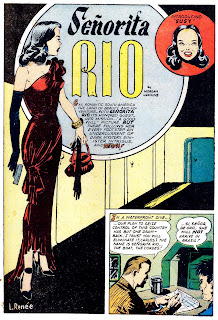 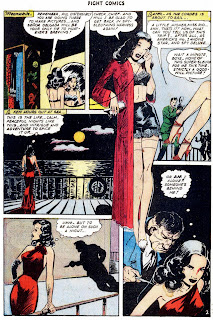 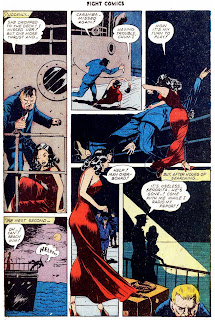 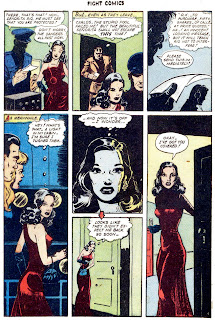 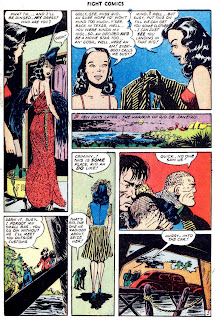 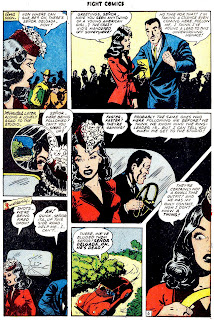 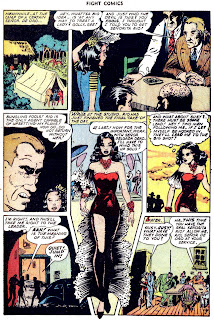 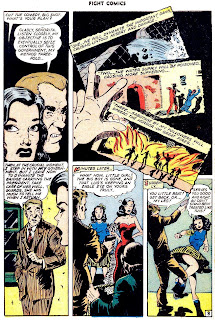 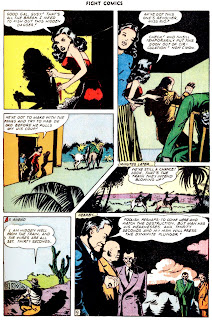 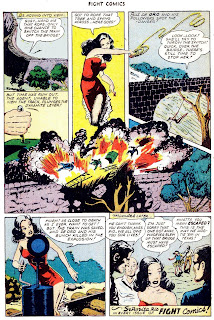 OMG Seniorita Rio is BADASS yo OMG! I hav NO IDEA wat happand in that story but she lookd FABULUS OMG!! Pappy thanx 4 tha link 2 ur badass son's band yo http://www.rumbleclub.com/songs.htm Yay! XOXOXO We hav a new ҉҉нąթթɣ★ɱҽɱoЯiąl Ďąɣ♥ Podcast & Song: http://ow.ly/lqoZI ♥OMG weR not on MySpace but pls tell ur son if he's on Revernbation we'll fan him XOXOXO

I want to take the Hooks Devlin course in "picking up dames."

1. Take the dames to a romantic tunnel of love and make sure to mention how she "may be dumb sometimes".

2. Leave her with important evidence that will obviously draw in the bad guys

3. Only teach her two words "oh" and your first name

The Rio story's art is a little bit worse than we've seen from Lily before. I wonder if it was printing? Or just a quick job?

Alicia, luck with the new song.

It's actually my nephew, Jack, who is the leader of Rumble Club. My son and my wife visited him and his family in Kentucky while driving back to my son's home in Pennsylvania.

I must've been trying to make conversation, otherwise I don't know why I would share information like that. But then, I'd been sitting in my house alone for a couple of weeks, no one to talk to but my cat, and the walls were closing in.

Brian, I suspect the Rio had job had something to do with a deadline rush, but Renée was just 20 when she drew it, if that means anything.

Senorita Rio was a movie star who supposedly committed suicide when she learned her fiance had been killed during the Japanese attack on Pearl Harbor (Fight No. 19). In a manner that was never really made clear, she was later resurrected and resumed her film career as a cover for espionage.

Incidentally, this was the only appearance of little Suzie. Supporting characters never had any real endurance in the Rio series.

Alicia, cute picture. The dad in Pappy is coming out...you girls be careful walking around in construction zones in high heels.

In a sense, I've been hanging around with cartoon characters all my life, just none as cute as you guys.