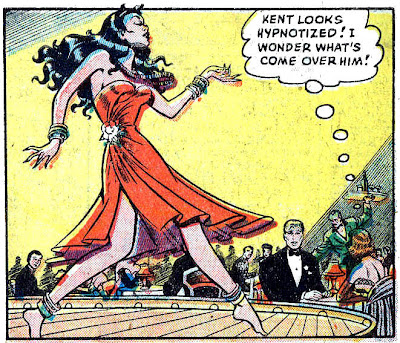 Kent’s girlfriend, Sue,* is naïve. She wonders “what has come over him,” when Kent is obviously stunned at the sight of sexy Tari, the siren of the tropics. Not only is Sue blind to the obvious, she loses Kent. He follows Tari, who is heading home to her home of Manaloa, but only after breaking the heart of some other poor schmoe.

I see the attraction, since Tari is drawn by Bill Ward, one of the greatest pin-up artists ever to work as a cartoonist, both in comic books and later in gag cartoons. But when Kent comes whimpering home after learning a painful lesson from Tari, Sue takes him back. I ask you women, would you do the same? This is a love comic, and in love stories love conquers all. But if I were to advise Sue, I’d tell her to keep Kent on a very short leash. 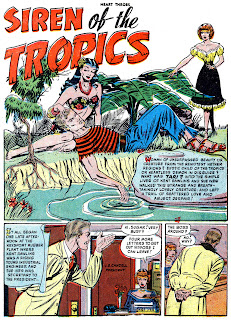 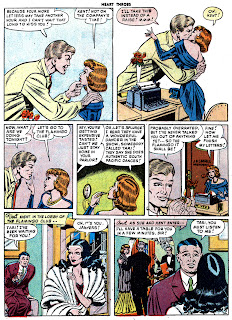 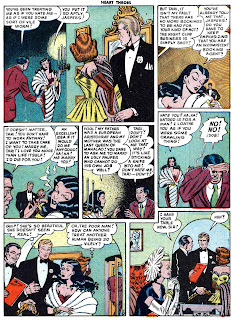 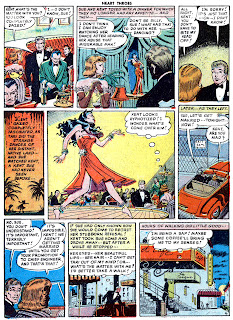 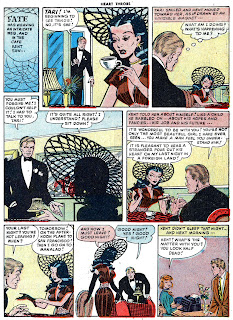 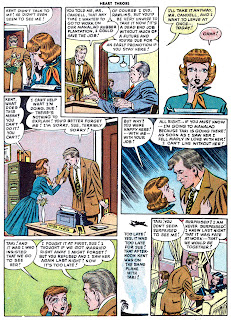 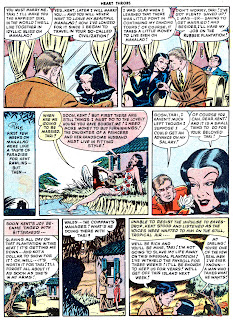 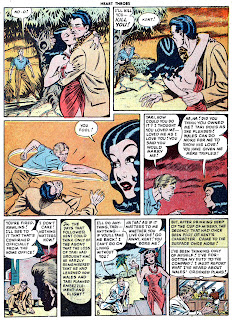 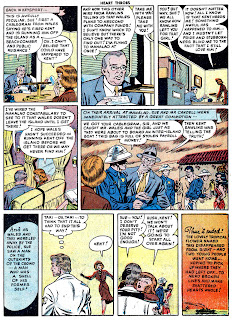 *On page one Sue has “four more letters” to type. Her name plate says “Miss Ives," — missives, as in letters. Is it a deliberate pun or just a coincidence?
Posted by Pappy at 12:01 AM

Poor Bill Ward, an assignment without shoes! He must have shriveled up a little inside! :)

I don't know if you noticed, but everything bad that happens in this story? Women's fault. This is why it's written as Sue taking him back; she knows it's her fault. The writer made sure to note twice that she refused to marry him and because of that, he couldn't "forget" Tari.

As silly as that is, the comic makes sure to lay that down. A lot of these stories have a real anti-women feel to them (some of them it covers like a slime), and especially where the men are but thin reeds being blown about by women, but this one goes that extra mile by blaming Sue for Kent running off with Tari!

And, of course, the story is more interesting for it. It's such a slice of golden age thinking.

Thanks for such an interesting take on the hidden theme of the story, Brian. In real life, not just love comics, women took the blame for a lot. Did you know if a boy was a homosexual it was his mother's fault? Yep, she wasn't nurturing enough. That was a psychiatric viewpoint of the era.

If a woman's husband left her it was because he wasn't getting what he needed at home.

If a woman was sexually harassed or raped it was because she led a guy on.

It was lose-lose all the way for women.

A lot of that old-time thinking still goes on. I guess it's more convenient for men to point at women and say, "It's her fault!" than to look within themselves for the real blame, and you have rightfully pointed out how that attitude played out in this story.