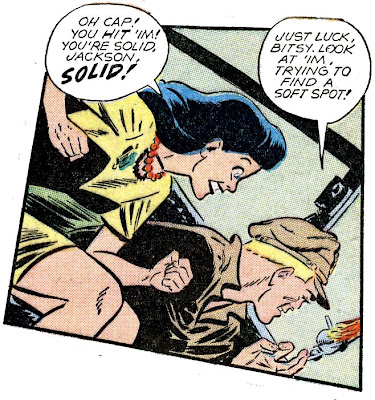 Love comes to Captain Wings, hero of Wings Comics, in the form of a young girl who has a mad crush on the dashing flyboy war hero. Bitsy looks to be jailbait. Hard to tell with girls...they can be sixteen but look older, and a man has to be careful. “Sixteen will get you twenty,” as the old saying goes.

This is the first Captain Wings story I've shown, because I've never cared that much for aviation comics. But then, I've never given them much of a look. I admit this particular one intrigued me. I will be looking at other Captain Wings stories, as well as other stories from Wings Comics. It was published by Fiction House, famous for its female pulchritude, aimed at boys and young men who like that sort of thing. And old men who like it, too (heh-heh).

Bob Lubbers is credited by Grand Comics Database as the artist. Lubbers had a long comic art career, both in comic books and comic strips, as well as assisting on other strips. You can read more about Lubbers and his career here. Like the best of the Fiction House artists, Lubbers had a knack for drawing pretty girls. In my opinion Bitsy is too young for Captain Wings, but give her a couple of years and Captain Wings will hope she's still interested in an older man. 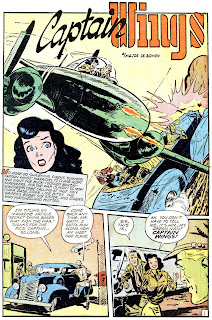 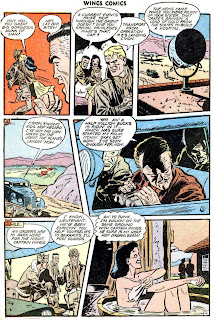 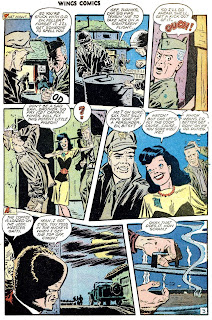 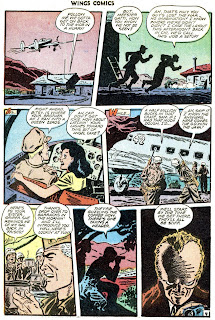 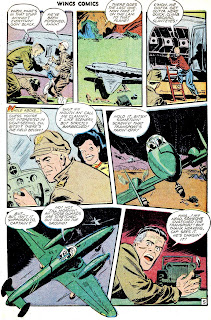 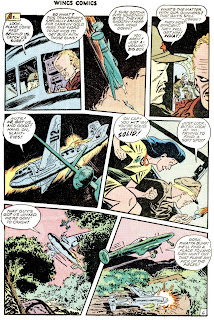 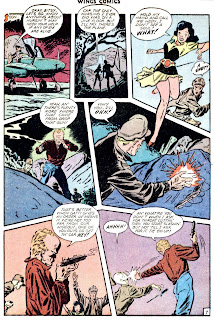 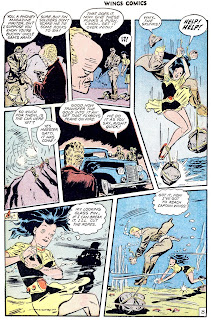 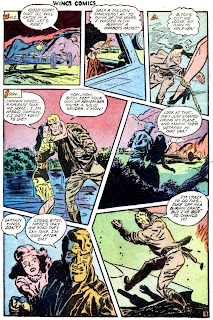 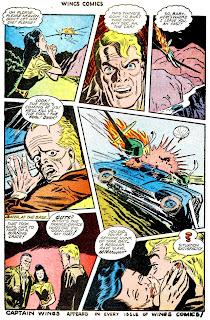 Normally I try to say something pithy but that was just awful! :)

The silly hep cat talk was hard to read through, Bitsy's eye shifting from blue to Little Orphan Anne white (maybe a colorist problem) made me think I stumbled into a comic about possession, and how Bitsy takes a bath in full view of the camp!

I mean, not necessary a bad thing, mind you, but Bitsy's going to get a rep!

Ages of consent were typically lower in the 1940s. (There are, of course, still issues of not taking advantage of the psychologically immature, regardless of legislation.)

Daniel, not only was the age of consent lower, but having sex with a minor wasn't considered the same way it is today. Until just a couple of decades ago age of consent in my state was 14. My nephew was age 21, married a 14-year-old girl (with her parents' consent). I'm not sure that could happen now, parental consent or not.