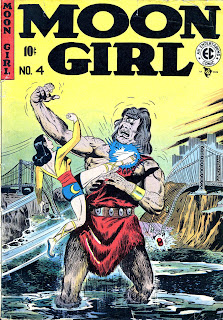 Moon Girl, the Pre-Trend EC Comics' version of Wonder Woman, fights off the cyclops, who has escaped from the prison, "miles inland on the island of Sicily," where he has been since Ulysses put him there. Having been out of action for a couple of thousand years at least, ol' One-Eye needs to eat. He grabs a shipload of grub before rising up sometime later on an American beach.

The story is from Moon Girl and contains at least one major howler: When meeting Moon Girl's enemy, the Professor, the caption reads, "In archaic Latin, the one-eyed giant speaks . . ." Maybe to 1948 comic book readers archaic Latin and archaic Greek were the same. But I'm surprised it slipped by even the most lax editor. That editor would have been William M. Gaines, as the indicia credit reads. Gaines took over Moon Girl from his father, Maxwell Charles Gaines, who had started Educational Comics after DC bought out his share of their publishing empire, All American Comics. The elder Gaines* had died in the summer of 1947, leaving the publishing company to his wife and son. 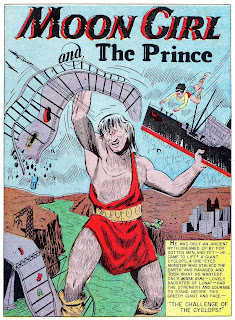 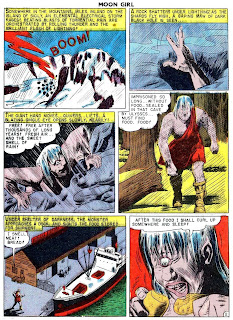 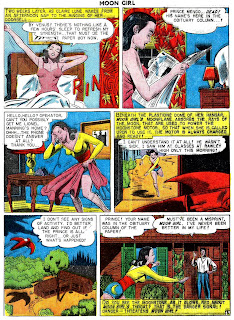 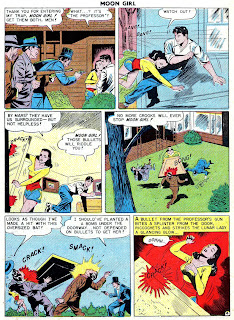 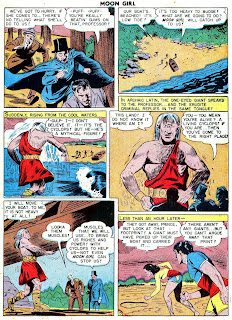 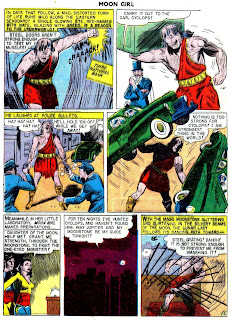 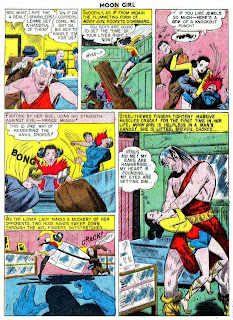 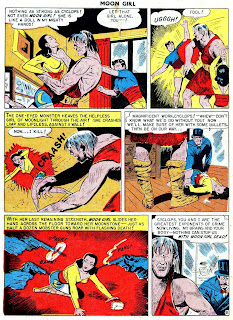 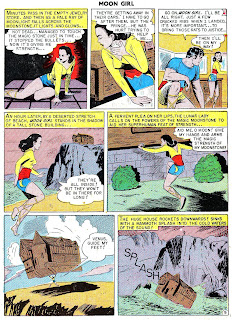 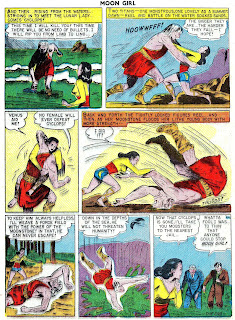 *The elder Gaines had also been the original publisher of Wonder Woman. Moon Girl was never close to being as bizarre as Wonder Woman, a comic in a class all its own. On Sunday, July 8, I'll be featuring a wild story featuring our favorite Amazon.
Posted by Pappy at 12:01 AM

Famously, as least as far as I know, Gaines wasn't very interested in the comics at first, at least not what they were publishing at the time, and was really running around duplicating what was big for a hit, and not having a lot of success.

Moon Girl was also my favorite "change the style but keep part of the name to avoid fees" bit, when it became "A moon, a girl, romance!"

Gumba, according to some accounts, Gaines was dragging kicking and screaming into publishing after his father died, because his mother wanted to keep the business going.

I'm wondering what happened, if Bill would bring comic books to his mom. "Mom, here's the new Tales From the Crypt."

"Oh, good, Billy...I really like that Ghastly Ingels, but you need more gore."

As for "A Moon...A Girl...Romance" — that was definitely stretching the Second Class Mailing permit to its limit, and the PO did catch them when they went from their crime comics to horror using the same permits.

There were, in fact, even Leroy templates for Greek letters (including the terminal sigma). And someone in a nearby Classics department would surely have been willing to give them a few phrases. (Folks in Classics departments tend to be very nice.)

(Actually, what one would really want would be the syllabary known as “Linear B”; but, at the time that this story was published, Linear B hadn't yet been recognized for what it was.)

Pappy,
To me, the editor doesn't appear to have slipped. If they'd named the hero Odysseus then I'd expect Greek. With the name Ulysses, I'd expect Latin.
Thanks!