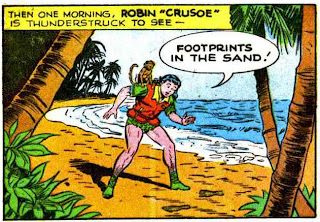 How old is Batman's ward, Robin, anyway? I've seen stories where he seems very young and then stories like this, where he appears to be sixteen or seventeen. It wouldn't matter except that he's allowed to fly the Batplane on a high altitude test flight. "Hey, Bruce, can I have the keys to the Batplane today? I'd like to take it for a spin, you know, see what it can do."

"Okay, but remember to wear your seat belt and no texting on the Batphone while you're flying."

You think Batman would just let Robin take off in an expensive plane without him along? Robin must've sneaked it out of the hangar when Batman was busy with something else. Teenagers — always getting into trouble.

Robin took the Batplane quite a distance before it cracked up and he ended up on a tropical island. There probably aren't any tropical islands close to Gotham City. Robin used his survival skills to kill game and when he encountered an enemy, Nazis no less, from a submarine looking for a secret oil base, he was able to fight adult sailors using his Bat-training. Even I learned something when Robin demonstrated how to swim out of quicksand. Next time I find myself being sucked into a quicksand bog I'll know what to do.

Robin is on the island long enough to grow a mullet, and in that kind of time you know Batman was frantic with worry. Which brings me to the question, how close were Batman and Robin? This page of original art from Batman #13, the scan provided by Heritage Auctions, has Batman telling Robin he'd "rather lose both arms than you." 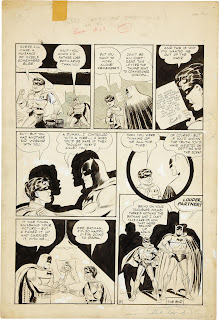 In the splash panel of "The Trial of Bruce Wayne" from Batman #57 (1950), they reach for each other when in danger of being separated. I'd say these examples show they were mighty close. So I imagine during the weeks Robin was missing Batman was anxious and upset. 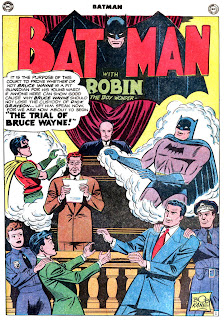 "Robin Crusoe" is from Star Spangled Comics #72 (1948). According to the Grand Comics Database it was written by Bill Finger, and drawn by Curt Swan, ghosting for Bob Kane, and inked by John Fischetti. The cover is by Curt Swan and Stay Kaye. 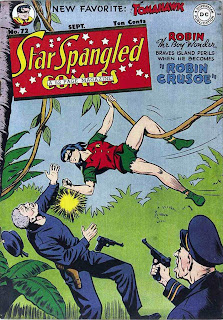 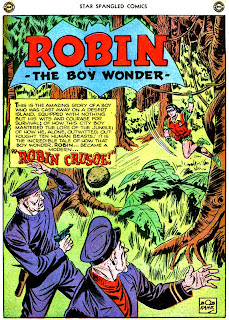 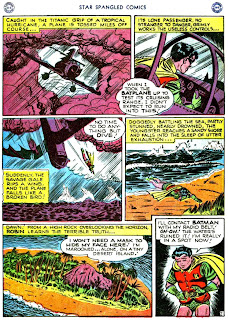 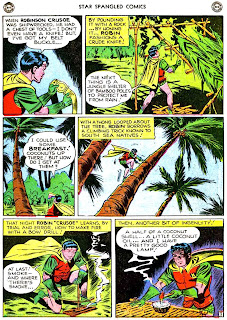 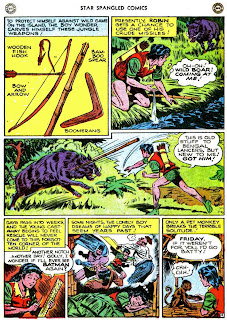 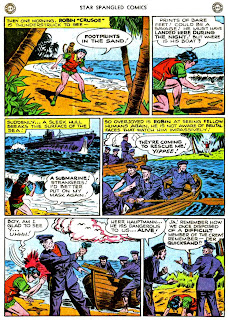 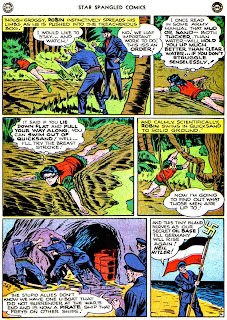 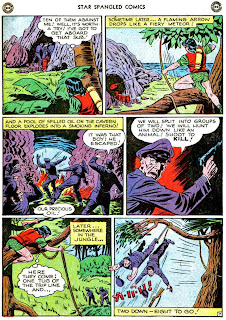 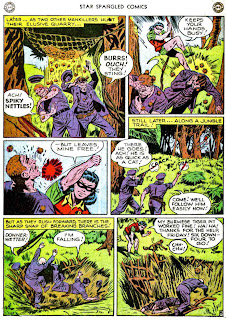 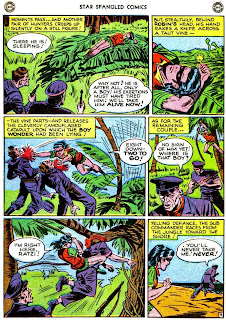 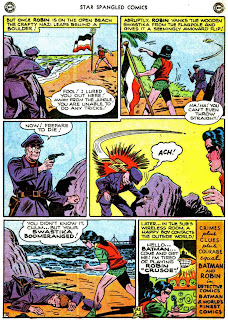 Looking at the artwork, I would guess it's a Jim Mooney job, rather than a Curt Swan.

In most Golden Age stories, Robin is anywhere from 12-14-ish; the ability to pilot and drive have nothing to do with age, really, and Batman's partner can be expected to have a much greater level of maturity than your normal kid of that age. I'm pretty sure he doesn't age into high-school years until the Silver Age.

GamerGuy, I was being facetious, of course. In the real world, if 12 or 14, Robin would not be out in harm's way or the Child Protection people would have something to say about it. He would be in school, or home-schooled to the state's satisfaction he was being educated. In the real world a 12 or 14-year-old would be able to drive a vehicle on private property only. Piloting a plane is a little bit different, but what news stories I've seen about underage youngsters piloting planes involve having an adult along with with the child.

In other worlds, mature or not, Robin, if he really existed, would not be out piloting the Batplane on his own, or taking the Batmobile, either, unless he was driving around Bruce Wayne's estate.

My response is all in fun, you know. Comics and real life intersect only in fantasy.