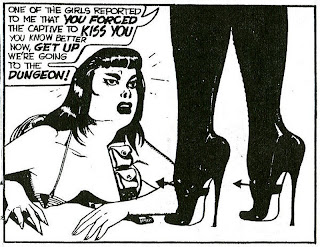 Like Wednesday's post about artist Adolphe Barreaux, Gene Bilbrew, who often signed his name "Eneg," published his art in a shadowy realm of disrespectability. His work appeared on covers and interiors of publications catering to a fetish audience. This story, called "The Passion Pit," has no nudity or hardcore sex, just some sexy costuming and a lot of innuendo. It appears Eneg swiped some of his war panels from war comics of the era (1950s), and lavished most of his effort on what the reader paid for, sexy women.

I showed this story in the early days of this blog, but linked the pages to the online storage site, Photobucket. Some of the links have broken, and rather than go back in and fix them I've enlarged the scans and am re-presenting them. As I said in that earlier blog, in the early '60s I was with a friend who bought "The Passion Pit" from a bookseller in a classic under-the-counter scenario."The Passion Pit" was hot in that era, the stuff of Times Square sleaze and the bondage-discipline crowd. Looking at it now makes me wonder how there could have been a time when anyone thought it was pornographic or dangerous. In today's porn-saturated world it seems almost innocent.

Bilbrew was African-American. He died young, about 50. I've seen a couple of sources use different years for his death, 1971 or 1974. What draws us to his artwork isn't technical excellence but an idea of a sexual underground where women dress up in latex and leather, spiky-heeled boots (with spurs, yet!) and dominate men. The "vitalizer" the sisters Fettisha and Sexsina give to the hero, Dick Strong (ho-ho), is a kind of liquid Viagra. The ability to perform sexually with chemical enhancement was a fantasy when this was written and drawn.

In the '70s I found a pirate edition of "The Passion Pit" re-titled "Chinese Torture," which removed Eneg's name. I sold my copy of "Chinese Torture" on eBay years ago, but before I did I photocopied it. The scans are from those copies. 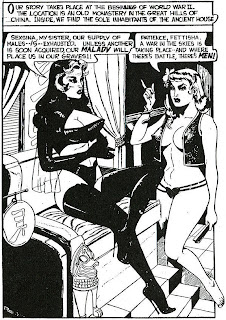 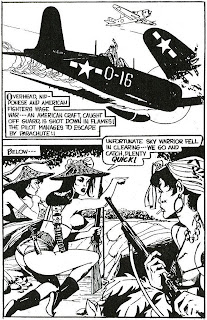 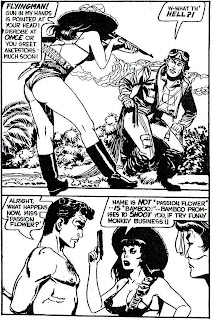 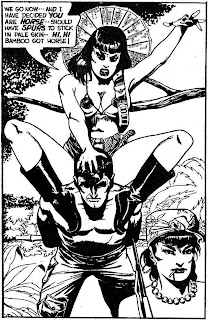 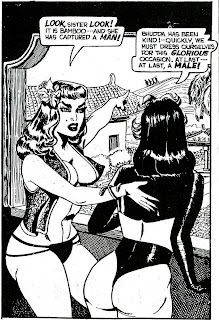 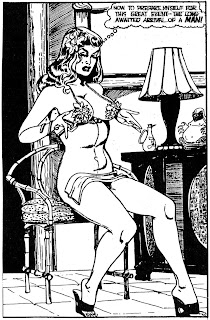 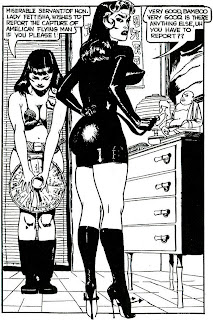 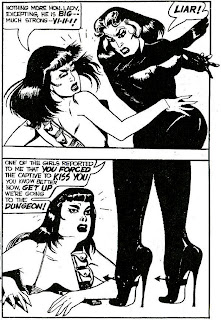 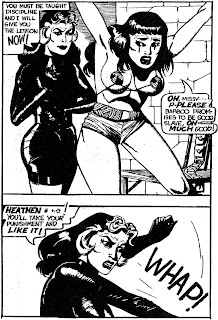 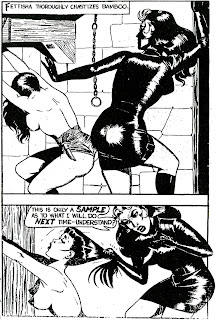 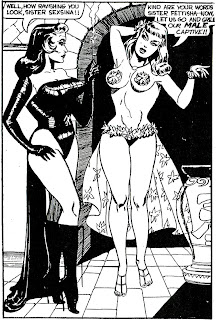 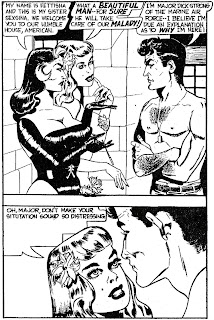 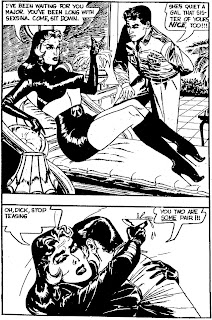 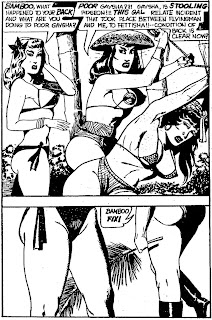 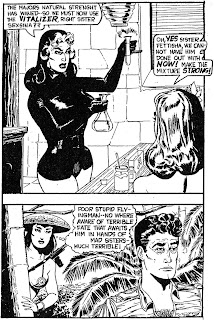 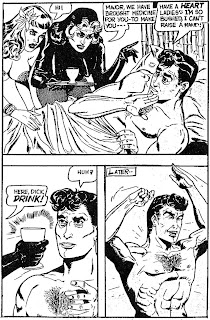 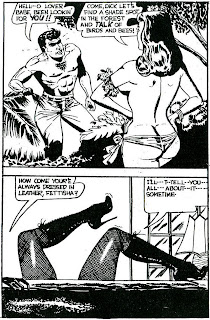 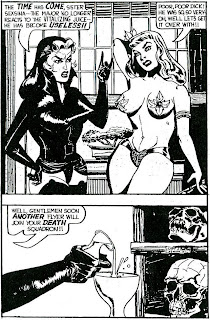 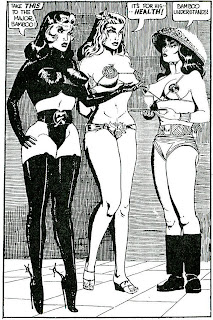 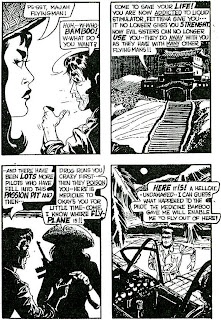 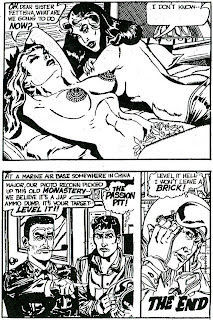 Wow...I turn my back for a couple days and, just lok at what happens around here. You kids better clear this outta here before Mom gets home and catches ya!

I've seen a lot of this kind of stuff, from earlier Tijuana bibles to Yoe's great "Secret Identity", but this is actually some very fine draftsmanship, and one has to wonder Bilbrew liked this or was forced into it because, sadly, it was the only work he could get. People talked about mob connections with early comics, but these kind of books were probably financed either through the mob or by people with mob connections, meaning it was probably a bit more dangerous than it was seedy.

I see a lot of Bill Ward in this, I wonder how much of an influence it was.

Gumba, since Bill Ward did some work in the same field as Bilbrew, doing covers for sleaze paperbacks, they might have known each other. I know that Eric Stanton, who shared studio space with Ditko, was also a contemporary of Bilbrew/Eneg.

I don't know how much the mob had to do with these things, but like everything else if there was money to be made they were usually there at some point to collect theirs.

Some of Eneg's work here seems swiped. I see some of George Wunder's "Terry and the Pirates" in the final panels, and as I stated, he appears to have swiped some from '50s war comics. Bilbrew's work was specialized for a certain audience and I don't know whether he tried to get into mainstream comics or not. His style to me looks professional for what was being published in comic books at the time (early '50s), but I know so little about him, and don't know what his aspirations were. I have heard he used heroin, but don't know if it's true. If he did I'm sure it would have made him unreliable for deadlines, etc.

They sure don't look Chinese (and I'm married to one)... and it's surprising how strength is repeatedly spelt wrong.

Think this might have influenced whoever used to do Wicked Wanda for Penthouse?

Keir, "Buddha" is spelled "Bhudda"...it shows there was no editor or at very least a proofreader.

Kirk, I believe a more direct link to Wanda would be Little Annie Fanny in Playboy, but taking away Annie's innocence and replacing it with kinkiness.

According to Paul Leiffer's Comic Strip Project file, Bilbrew was born in 1923 and died in 1974. He studied at the Art Students League in NY. He was an assistant/ghost on the "Clifford" page by Jules Feiffer, which appeared in the "Spirit" comic section during 1950-51. He is also said to have done some comic-book art for Will Eisner during those years, most likely for his promotional/sponsored projects.

Thanks, Alberto. I wonder why Bilbrew went no further than the Eisner studios? Was it race prejudice or, as some have said, a drug addiction?

I'm speculating and have no answers. I appreciate your input and information.