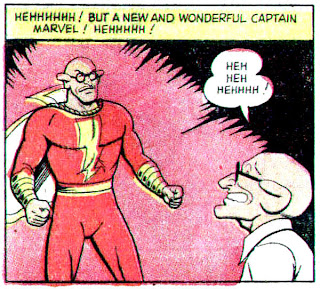 You're a kid in 1953. You love comic books. You spend your 50¢ a week allowance on them. New comics are put on the stands on Thursday, so you head to the drug store after school to look for your favorite comics.

Bummer. You're puzzled as to why you're not seeing the familiar comic books. You don't know that Superman, whom you think is stodgy compared to Captain Marvel, finally beat Captain Marvel down and sent him packing. They'd been battling, not with thundering blows in combat, but in court. A judge decided that Captain Marvel was just too much like Superman, so Captain Marvel's publisher, Fawcett, decided to cut its losses and canceled their whole comic book line.

You have a long wait until the next issue, until 1973, when DC—the company that put your favorite comic book character out of business—brings Captain Marvel back. But the name "Captain Marvel" has been taken over by Marvel Comics for a science fiction hero. So the new DC Captain Marvel book actually comes out with the title Shazam! 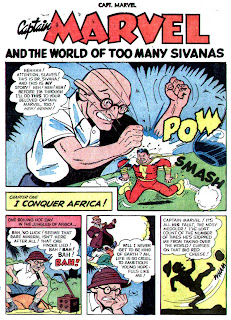 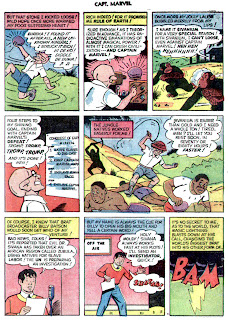 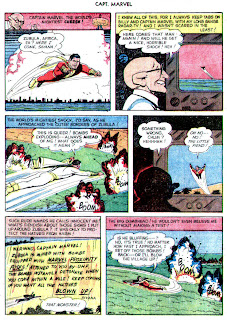 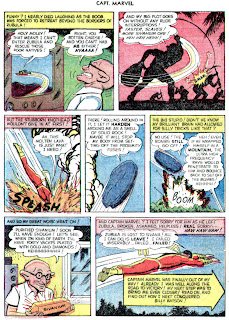 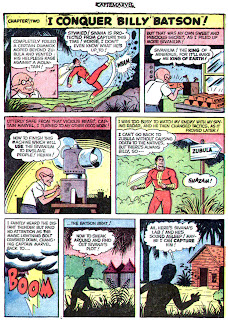 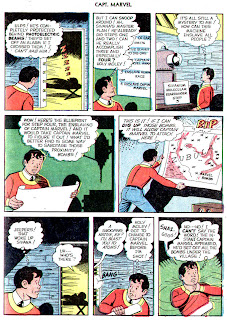 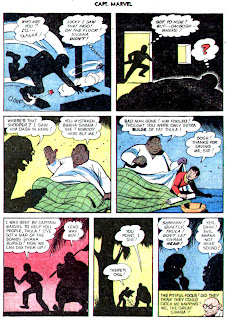 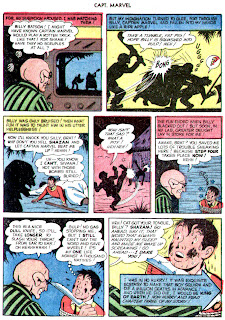 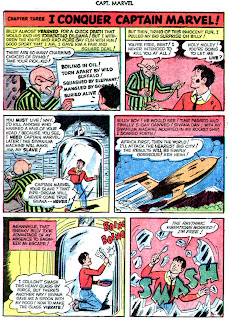 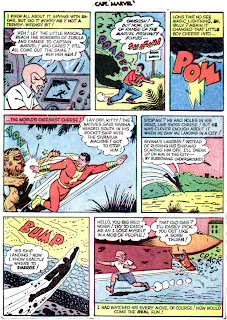 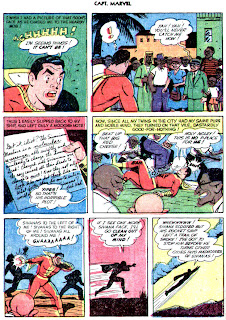 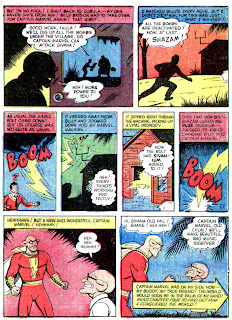 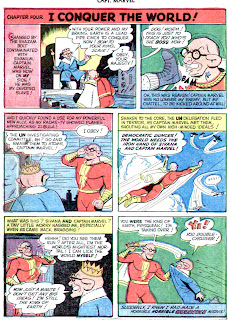 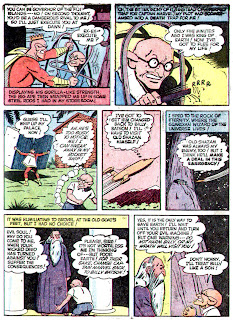 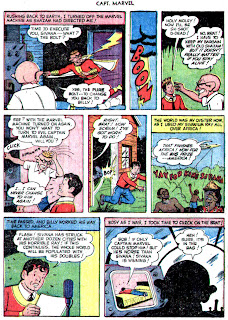 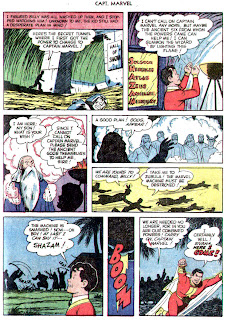 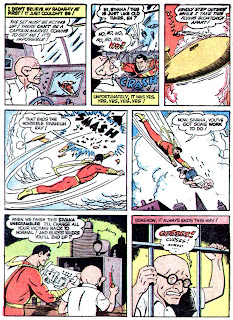 Silvana makes the same error as many of my ESLs it appears, when he proclaims "I can't loose!"

Keir, "loose" for "lose" is so common and yet so obvious I don't know why people can't see it.

What am I saying? I can spot typos and spelling errors in others' writings and yet often can't see them in my own.

I guess Captain Marvel appealed more to kids than Superman because Cap was, after all, still a kid, magically transformed into the Big Red Cheese - despite his adult size and superpowers, he was still Billy Batson inside.
And Sivana, in spite of his vaunted intellect and scientific knowledge, was an overgrown child himself - a selfish schoolyard bully, throwing tantrums when nothing goes his way.

rnigma, you've hit it on the head. Captain Marvel was magic, and a kid reader could dream of saying a magic word and becoming a grown man who can fly and has super strength. (He could dream of growing up to be Batman, too, who was an athlete and billionaire, but no need to worry about how to gain superpowers.) But Superman...Superman was from another planet. A kid would have a hard time fantasizing that, especially if he was prone to fantasies about becoming a superhero.

I've always wondered whether, off camera, Billy Batson explored the possibilities of being a grown, handsome man, and the effect it must've had on the ladies (the movie, Big, with Tom Hanks suddenly flashes before my eyes, and the character's naïvete, and oh well, maybe not...)

Compare this wonderful piece of work to the drek that is being produced these days and its easy to see why these older stories still have such pull on our imaginations. I'll never understand why the powers that be at the Big Two feel this stuff is beneath modern readers; the fact that my own two sons prefer the older comics (a decision they arrived at on their own, by the way, without any prodding by dear old dad) is proof enough for me that this stuff still rocks and the newer stuff blows. (If you'll pardon the modern terminology.)

Jules Feiffer, in his classic book on classic comics, referred to Captain Marvel as "a Disneyland of happy violence". I think he meant it as a compliment.

Capatain Marvel was so different from Superman, if not in actual powers than at least in the secret identity, and overall tone, and even the style of drawing. Had Capatain Marvel been number two instead of number one throughout the 1940s, I doubt if DC would have made so much fuss.

Anyone know if Seigel and Shuster had a problem with Captain Marvel? They had their issues of their own with DC by then.

John, I solved the problem of dealing with newer comics by not reading them. If I'm stuck in a time warp so be it. Like your sons, when I first saw Golden Age material I loved it for its raw energy, despite its lack of technical perfection. I understand readers are more sophisticated nowadays and I appreciate that. But comic books I thumb through can look so slick in their presentation that they often put me off.

I accept criticism that I don't keep up with the industry, but it has priced itself beyond my reach (retired, fixed income), and what the hell, the older stuff makes me happy enough to just stick with it and bypass the new.

Kirk, I don't know whether Siegel and Shuster had problems with Captain Marvel, or if it was just corporate: DC trying to get rid of the competition by claiming copyright violation (and ultimately winning).

In the Siegel and Shuster days I thought the stories were often more in the Captain Marvel style than the later stuff after they were kicked out.

Pappy, I'm with you. For the most part I quit reading new comics not along after DC released "Crisis On Infinite Earths." I still pick up an occasional Star Wars or Edgar Rice Burroughs-related comic, and I find I still enjoy reading a number of the Archies (is it okay for a 49-year-old geezer to admit THAT?) Otherwise I don't waste my time or money on the new stuff anymore just because so much of it is so darn rotten.

John, I'm now the person I swore I would never be: too set in my ways to listen to new music or read new versions of my favorite old comics. I criticized my parents for being exactly the way I am now.

There just comes a point where the parade goes by, and a few years ago I watched the last of it disappearing into the distance. In my prime comic buying days, the eighties, especially, I spent a couple of hundred a month on new comic books. Since I believe in Sturgeon's Law that 90% of everything is crud, about 90% of the comics in my house from that era have remained unread since I bought them off the stands. (The Golden Age stuff I bought at conventions and through the Comics Buyers' Guide are a different story.) I was still picking up some comics when the new millenium began, but then my local comic book shop went out of business. By then I was picking up only occasional comic books, and mostly the archival books or graphic novels. I wasn't a lot of help for their bottom line. After they closed I refused to patronize any of the other comic book stores in my area because they're the look-but-don't-touch stores. They keep their comic books in bags and won't allow them to be inspected. I won't do business with a store that won't let me look at what I'm buying, simple as that. The unit prices are too high for me to gamble on a new product just on the strength of its cover.

I gave up on superheroes long ago when I felt too many diverse hands and visions for the characters started to conflict.

As for you looking at Archie, why not? The other night I read through a stack of old Disney comic books and didn't feel a bit guilty about the pleasure they brought me. Never feel bad about feeling good.

Concerning old vs new comics: One of the things I like about the era you celebrate is the diversity of comics back then. Superhero comics, funny animal comics, western comics, romance comics, teenager comics, hard-boiled detective comics, horror comics, jungle comics, satirical comics, historical comics, war comics, etc. Basically, any genre that existed in books or movies, there was a comic for. It was somewhat like that when I was growing up in the 70s. But now, except for Archie, it's all superheroes. I personally have never been a fan of superheroes per se. Instead, I'm a fan of superheroes IN comics. While I enjoy a superhero movie or TV show if it's well done, I've always thought the concept worked best on ink on paper. What I think might be going on now, is we have people who are fans of superheroes, the concept of superheroes, but not necessarily of comics per se. They'll SETTLE for superheroes in comics, if that's the only place they can get them, but I'm not sure they really appreciate the art or craft of telling a story through a series of sequential pictures. I may be prejudging them, but that's how it seems to me.

Concerning old vs new comics: I don't pick up comic books too often any more, but when I do, it seems like the art is all manga-inspired. Nothing against manga, mind you. It was an exciting new movement when first exported to these shores from Japan some 20 years ago (the animated equivelant first showed up almost 50 years ago via SPEED RACER and ASTRO BOY) but now it's become an industry standard. I wonder if you can still have artists with individual styles like Jack Kirby, Johnny Romita, and Steve Ditko. Again, I don't read that many comic books any more (they CAN set you back) so maybe there are such artists, but I'm not aware of them.

Kirk, I'm sure that fans of new comics will be looking at our comments with disgust and thinking we're wrong. I'm not knocking anyone who works in the industry now. It's just different and because of the aforementioned costs of keeping up with expensive comic books I don't have the money or inclination to follow any titles.

Right now there is a Golden Age going on with superheroes in movies. I try to imagine what it must be like to be a fan and a movie maker and have someone give you hundreds of millions of dollars to put your comic book heroes on the screen. That would have to be a heady feeling!

Like you my interest in superheroes is reserved for superheroes in comics. I have really liked some superhero movies, but had they never been made I don't think it would have mattered to me. I like the idea of an artist sweating over a drawing board putting fantasies on paper, rather than a huge committee of business people mixing with teams of creative-types to put that same superhero in theaters. In that way such individual visions as we've enjoyed in the comic book versions are submerged by those hundreds of millions of dollars and the need to make them pay off.