Number 1171: Ken Shannon gets in your face with his big face 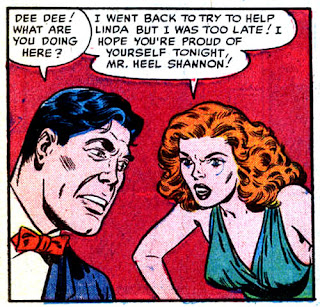 I noticed something about private eye Ken Shannon. He appears to have symptoms of acromegaly. That's a condition where parts of the body, hands, feet, the face, continue to grow. Ken's lantern jaw is a dead giveaway. He should see a doctor. The disease is fatal.

Reed Crandall handled the art chores (pencils only, unknown inker) for Ken. The Thrilling Detective website says Ken has "more than a passing resemblance to My Three Sons' Fred MacMurray." If so, that would make Fred the basis for two comic book characters: Captain Marvel was supposed to have been based on MacMurray, also.

I showed another Ken Shannon story in Pappy's #693.

Below is the cover for Ken Shannon #3 (1952). It illustrates the lead story of the issue, which is also featured in the new book, Zombies, from Craig Yoe and Steve "Karswell" Banes. After you get done reading the story, “One Day I'll Kill You!” (a killer seeking vengeance believes strongly in the old adage, “Revenge is a dish best served cold”) I have a review of Zombies. 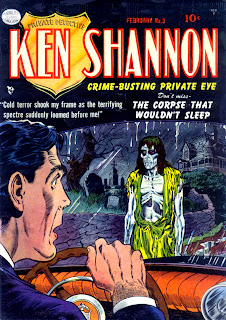 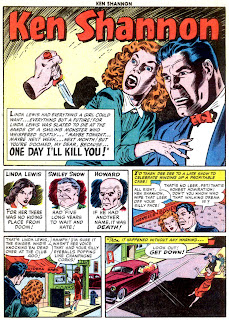 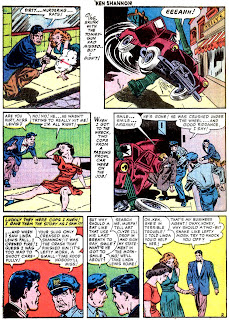 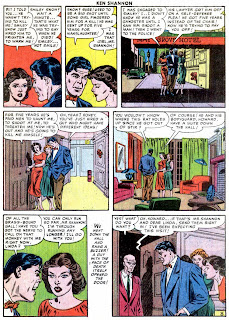 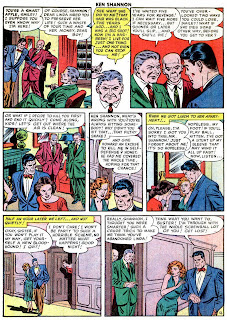 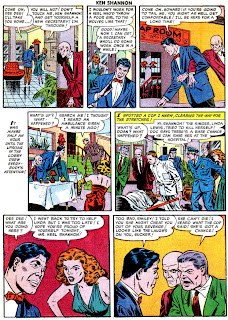 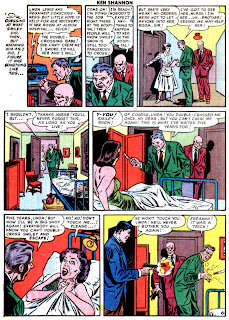 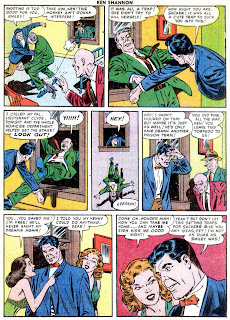 Consider horror in pop culture. Genre movies are popular and like the legendary vampires and zombies, they can still be around long past a normal lifespan. Horror novels are always popular, and horror short stories old and new are perpetual anthology favorites. Horror on television rears up its rotting corpse, especially with programs like The Walking Dead. The one medium where horror isn't especially well known to the general public is in 1950's comic books. At the height of  their popularity horror comics were suppressed, taken off the newsstands in mid-decade. There were a lot of titles, and between them they sold millions of copies every month. Despite being loved by their readers the bluenoses prevailed and for decades the comics were the lost horrors. (The Walking Dead is based on a modern comic book, but unlike the products of the fifties, hasn't been boycotted or investigated by the U.S. Senate.)

I'm very happy to see an anthology like Zombies, a collection of obscure stories from those horror comics of the 1950-1955 era. Take the splash page of "I Am A Zombie" by Lin Streeter, which opens up Zombies...every panel has a horror element, a skull-like head, walking corpses, dripping blood and a hand coming out of a coffin. It's creepy, a perfect example of why these comics were so popular with their fans, and why they still have that effect on us today. 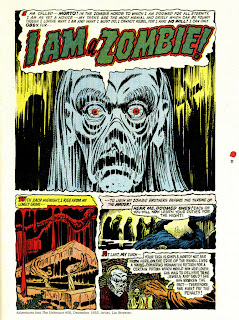 Steve "Karswell" Banes (The Horrors Of It All) and Craig Yoe have collaborated to present stories from a specific horror genre, showing zombies in all their undead ghastliness. These are the pre-George Romero zombies, so don't expect to see any gunshot gore, no exploding heads. Zombies being animated corpses are scary enough, even without the overt blood and guts of the movies.

I was very happy to see that Craig and Steve included a favorite of mine, "The Horror of Mixed Torsos," drawn by Dick Beck, from Dark Mysteries #13 (1953). The story was outrageous then and 59 years later maintains that distinction. Most of the best horror comics publishers are represented in this collection except for the most infamous, EC Comics. Banes and Yoe have stuck to public domain stories, which is fine with me. EC's horrors have been well represented in various forms (including a TV show based on Tales From the Crypt). The prolific publisher, Atlas Comics, is also not represented, but they are still in business as Marvel Comics. The stories published long ago by publishers defunct now for five decades will be new to most readers who read the book.

Over a week ago I recommended Zombies before I had even seen it. I received my copy the other day, and I'm glad my impressions of an unseen book were borne out. I started to read just as the sun was going down. There was a storm moving in; the sky darkened and the wind picked up. I went through the book page-by-page as my old house groaned in protest of howling winds. It sounded like the moans of the living dead. Tree branches played bony fingertips tapping on my windows, lightning flashed and thunder crashed, giving me a perfect atmosphere for my reading. I could not have planned such an auspicious time for it to arrive.

Zombies is number three in the series, The Chilling Archive of Horror Comics, which includes the books Dick Briefer's Frankenstein and Bob Powell's Terror (there's a Bob Powell story in Zombies, also). As usual, yet another great book from Yoebooks, recommended highly by Pappy. Affordably priced at $24.95, and available from the usual outlets, including Yoebooks, Amazon.com, and others. If you're like me you'll want it now, but what the heck, it's only six months till Christmas, and not too early to put it on that list.
Posted by Pappy at 12:01 AM

I always thought Ken looked like Lon Chaney Jr. Crandall used a lot of photo reference, so he may have based Ken's look on someone he knew as well. He tended to use friends and neighbors as models.

I could look at Reed Crandall's work allday. A master of faces. Ken Shannon has a bit of Fred MacMurray goin' on so it makes me think that it's what Captain Marvel would've looked like if Crandall tackled him!

Ken Shannon is an ass kicker for sure, expertly illustrated and scripted-- it's one of my favorite private dick series ever, and this story is a perfect example.

Craig and I greatly appreciate the ZOMBIES book review as well, Pap!
XOXO

Charles, I agree that Ken Shannon looks more like a real person than someone out of comic book central casting. Your mention that Crandall used photo reference for characters would fit Ken Shannon.

Something I noticed is the difference in styles from 60 years ago, when many men wore suits and ties every day. Ken Shannon wore a bowtie, which seems an odd choice for a tough private dick.

Karswell, I loved the Ken Shannon story in your book, but it seems a bit of a cheat as far as zombies go. There's no cheating in the Jack Cole classic from another Quality Comic, Web Of Evil, "The Corpse That Wouldn't Die!"

I also love those Harvey covers, classic walking corpses by Lee Elias. What surprised me is to find the layouts were by Warren Kremer, more famous for Casper the Friendly Ghost. No friendly ghosts in those covers, that's for sure.

You will see tough guys wear bow ties in some old movies. They are practical to wear if you are a brawler, because someone can grab your necktie and slug you, unless it is a clip-on, but it's tough to grab a bowtie.

>loved the Ken Shannon story in your book, but it seems a bit of a cheat as far as zombies go.

We included it because we wanted a good example of a zombie story that wasn't neccessarily supernatural. Thanks again, Pap!