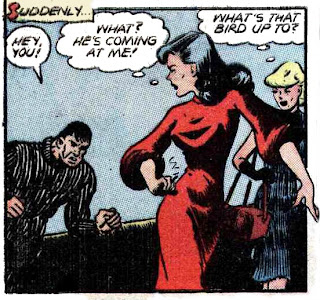 In a 2010 article for Newsweek Lily Renée says she is amused by the attention her late 1940s career in comic books has gotten her. The picture of her from the article shows a tall woman, slim and regal, still beautiful in her eighties. Lily Renée looks her birthright, a girl from a privileged, rich Austrian family. Both she and her parents, using different routes, escaped the Holocaust by coming to America. They left everything behind, including their wealth.

Renée, whose birth name is Lily Renée Wilhelm (now Philips), answered an ad for artists at Fiction House and got a job. Apparently she took to it very well, despite having never looked at a comic book. Her stories are as well illustrated and her storytelling as good as any by the male artists of Fiction House. She was raised to a star position, drawing features like "Señorita Rio" for Fight Comics and "Lost World" for Planet Comics. She was also given "the dog," as she put it, the feature no one wanted, "Werewolf Hunter," which she turned into a sumptuous strip full of her fine art influences.

Trina Robbins has written a graphic novel for young readers based on Renée's story, drawn by Anne Timmons and Mo Oh. Lily's story is compelling. There was no guarantee she would make it to America without having some luck along the way. It's available from Amazon.com. As comics fans we tend to focus on her comic book work, but there might not have been any comic book work if she'd been swallowed up like so many others in the death camps. Her comic book work isn't given a whole lot of room in the biography, the focus being on her escape from the Nazis. As I look at the examples shown from Lily's comics work of the forties in the graphic novel it seems a whole world, and a long way away for comic book art. I've mentioned before that comics are a moving medium, in a state of continual growth and change. I wonder if any child in the age group for which the graphic novel is aimed would recognize it as comic art, especially since Timmons' and Oh's artwork for the biography is in a modern comics style. The two styles make for an interesting comparison.

I love looking at Lily Renée's artwork and find her story inspiring, even though she got out of comic books and dismissed them from her life until the fans found her. Her wryly cynical comment from the Newsweek article, "It [her comic book art] was undervalued then, and now it's overvalued," may well be true from her perspective. For us fans of the Golden Age it's not overvalued, but it is valued. And it's not just because of her escape from the Nazis, or landing a job at Fiction House to help her struggling family. It's valued because Lily Renée drew great comics. 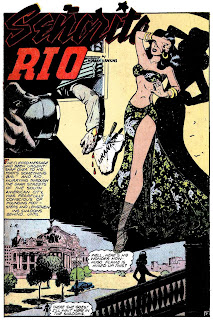 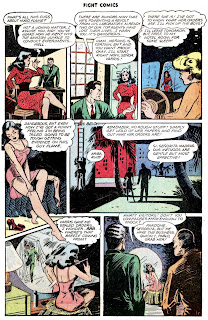 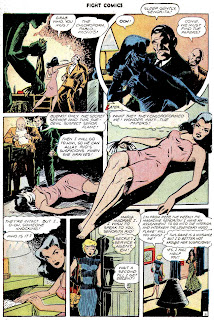 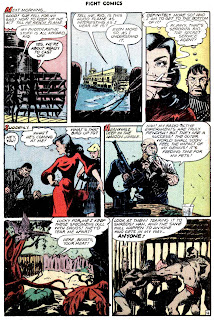 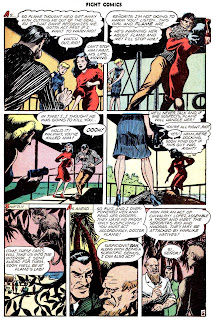 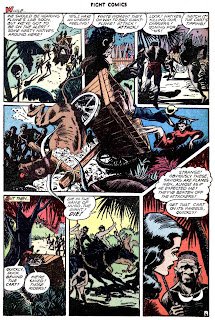 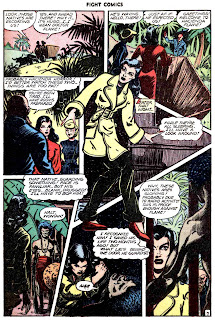 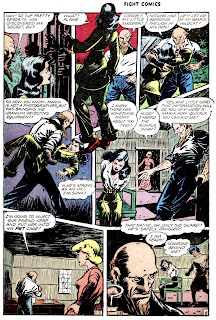 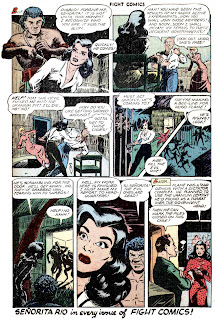 Lily Renée is a terrific subject for a post. Her life experience is fascinating and her golden age artwork was "aces".

Great background story, Pappy. Few women in comics there, nice to hear about them.

Just gorgeous. There isn't much else to be said about the art, but being Fiction House you can't say the same for the story which is paced badly and confusing.

Notice the the natives aren't depicted in an overtly racist manner.

As far as I know, there were supposedly a number of woman who wrote for these companies anonymously, and only a couple that were ever famous (like colorist Marie Severin at EC.)

I feel bad about commenting how sexy Rio is, after you read about Lily's time at Fiction House, and an extra thanks for that article, it's a great story.

Though I will have to comment that her "get decent" outfit seems, well, less decent!

You're on a roll, Pappy!

Lily Renée could draw sexy, leggy women as well as any male artist, but the picture I find really striking (if not particularly sexy) is the fifth panel on the fourth page, the one where the guy's eye is enlarged by the magnifying glass. Cool!

Renée's story is certainly a fascinating one. You never know who'll end up working in comic books.

Thanks for the comments, guys. I find Renée's story very interesting and have featured her work before. I've also featured her along with Fran Hopper, another female artist who gave up on comics after a time in Pappy's #784.

I think with most industries where women filled in while the men were at war, when those GIs got back home the women were sent packing. Too bad, and a waste of talent. Renée also did issues of Abbott and Costello for St. John.

Gumba, a couple of women who wrote for comics were Toni Blum, who wrote for the Iger Studio, and Patricia Highsmith, who went on to write the novels Strangers On a Train and The Talented Mr. Ripley, among others. Highsmith rarely talked about her comic book days. Like Lily Renée I think she thought that work beneath her, or immaterial to what she did after comics.