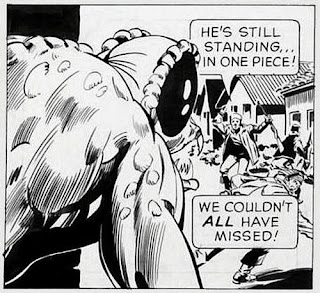 Carlos Garzón, from Bogotá, Colombia, saw Al Williamson's Flash Gordon work in the '60s. He found out Al was raised in Bogotá, so he sent him samples of his work. By 1970 Garzón was living in New York and working with Williamson. Despite their long collaboration, Garzón did solo jobs, also, including Gold Key's Flash Gordon and this five-page strip from Boris Karloff Tales of Mystery #69 (1976).

I chose it because I found scans of the original art on Heritage Auctions, so I'm showing both versions.

George Wilson did the cover, based on a panel from the story.

The latest I heard was that Carlos is living in Orlando, Florida, working on various projects. 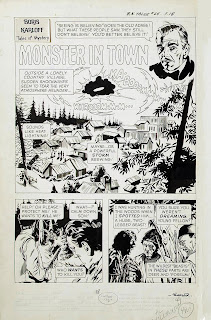 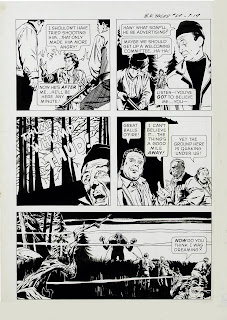 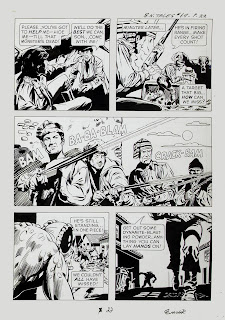 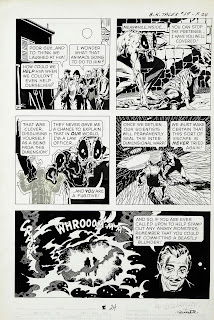 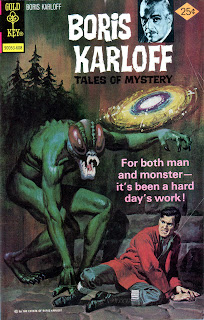 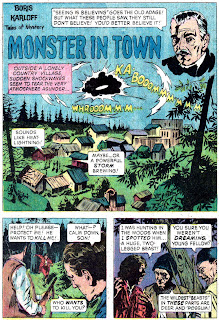 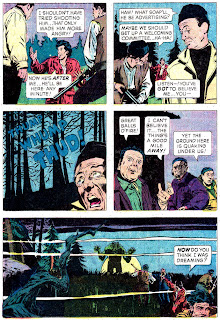 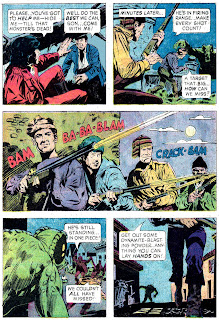 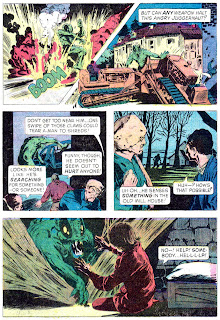 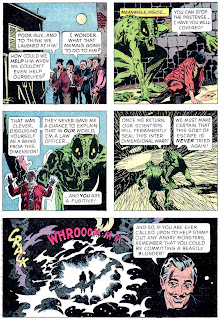 There'd be a lot less mix-ups if aliens would just put on some clothes! Nobody would think they were a beast. Is there an intergalactic treaty that everybody must be nude?

Some great artwork here, even better in B&W. Williamson's influence shows through, and the figures are really fluid and the expressions are great. Show more from Garzon! :)

BTW, you're stretching of the panel for the masthead makes it look really strange; faces are especially wild, I love the look!

I miss this type of short comic story. Nowadays this would be padded out to six issues because that is the only format that appears to be acceptable.

Thank goodness for the expanding world of reprints available back from when comics were entertaining.

Any chance of a post outlining how we seem to have missed Golden Age Green Lantern's sexual orientation?

UUShadow, thank goodness for perceptive readers like you, Gumba, and Keir, all of whom left comments today.

Keir, I don't have very many old Green Lantern comics (I have a few) but will probably post one someday with a few comments.

I don't see any purpose to making Alan Scott gay. (As Seinfeld would say, "Not that there's anything wrong with that!") It just comes off as another gimmick to get publicity for comic books in the mainstream media. In that way it's insulting to gay people and to comic book readers in general.

I'm reminded of when (for one issue) Lois Lane was turned into a black woman. (Not that there's anything wrong with that!) But like the aforementioned Green Lantern gimmick, it was also insulting to readers.

Lois Lane black? Huh? How? When?!
I agree with you completely. I just find the cynicism that drove this promotional campaign overwhelming. After all this time, I find it impossible to accept the thoughtless rebootings of characters older than those making such changes. But then, as will be this case, the changes end up temporary; remember when Superman 'died'? Can you name all the incarnations of Robin? Which number Green Lantern is this one? No doubt this one will be replaced by yet another when DC finds the curiosity-driven sales dry up.

Keir, "I Am Curious (Black)" was the story. You can read about it here.

If you want to induce jaw-busting yawns in me, show me those gimmicky issues where characters "die" or otherwise have life-changing situations that we all know will change again when sales start to lag.