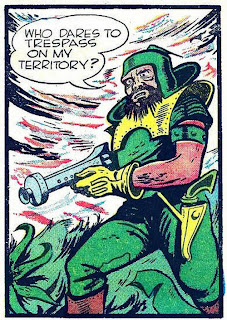 Dick Briefer is mostly known by Golden Age comics fans as the creator of the funny Frankenstein of the 1940s, which became the serious Frankenstein of the early ’50s. Briefer’s career goes back to the earliest days of comic books. He left the field about the time the Comics Code came in, in the mid-’50s.

Briefer created Rex Dexter of Mars for Victor Fox. Rex was the child of a scientist and his wife. They built a rocket ship for the 1939 World’s Fair, and ended up crash-landing on Mars. Years later Rex came back to Earth and with the American military fought off a mad scientist holed up in Europe. (I'm getting my information from the Public Domain Superheroes website.) There were only so many genres comic books explored in those early days, and just about every anthology title had a space hero.

Rex was shacked up—or more properly “rocketed up,” since they lived in Rex’s spaceship—with Earth girl Cynde, whom Rex rescued in his first appearance in Mystery Men #1 in 1939. Rex lasted through Mystery Men #24, in addition to an issue of his own comic. 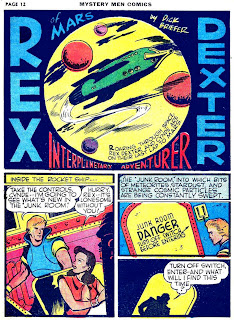 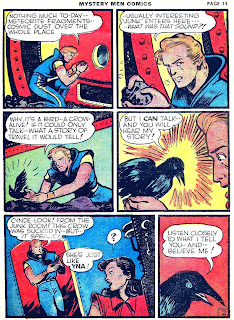 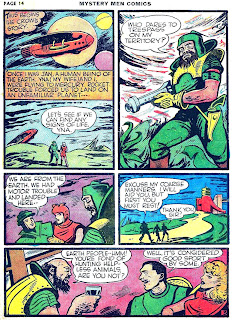 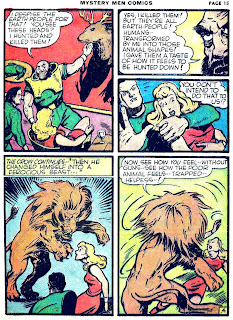 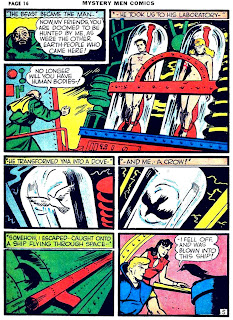 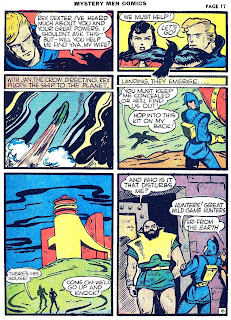 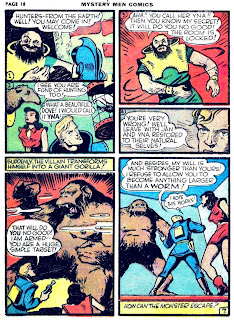 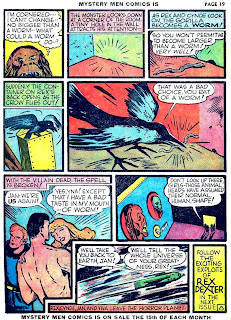 Still available, Dick Briefer's Frankenstein, the deluxe hardcover from Craig Yoe, printed in color, and The Monster Of Frankenstein, a trade paperback reprinting all of the "serious" Frankenstein stories Briefer did, reproduced in black and white.

Page 5 seems pretty risqué for 1940. There certainly where a lot of artists doing "headlight" girls -- Feldstein's whole early career was that -- but that one still caught me by surprise.

I could go on an on about the science in this one, but I just enjoyed the idea that there is a cosmic debris compartment! It's like the trunk of your car filling up with trash as you drive down the highway!

Gumba, there's a sort of Adam and Eve look to the panel you refer to, coyly covered body parts, which I've seen in some illustrated versions of Genesis, but for a comic book it seems a bit much. There were complaints from parents and teacher groups in those days about comic books, and this is the sort of thing that would get their attention.

I've always wondered at human nature; why it's bad to show nudity or sex but OK to show violence and death.

I'm with you on that one, Pappy. Why violence (which is only good when it's funny....i.e. a la Bugs Bunny) over sex or nudity (which is ALWAYS a good idea!)?