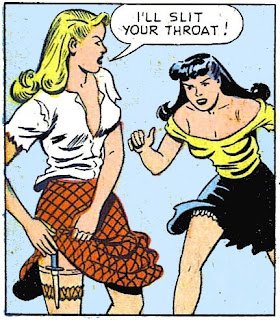 Adolphe Barreaux is a pioneer in the history of comic books. He started out drawing comic book-like stories for Harry Donenfield (who later went on to take over DC Comics from its founder, Major Malcolm Wheeler-Nicholson). Barreaux drew the sexy Sally the Sleuth stories for Spicy Mystery Stories, an under-the-counter pulp Donenfield published before he took over DC Comics. Donenfield set Barreaux up with an art shop, with himself as co-owner, to provide artwork for his line of pulps. Here's an example of Sally the Sleuth, from its days as a two-page strip (and I mean that literally...Sally could not keep her clothes on), from Spicy Detective (March, 1935). The scans are from the 1988 Malibu Comics reprint. 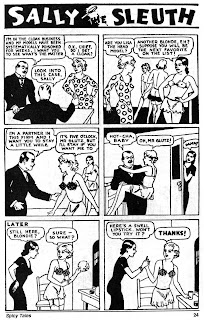 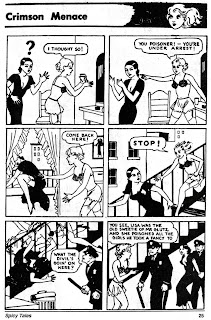 Later Barreaux became editor of Trojan Magazines, Crime Smashers, and other titles, a small publisher also bankrolled from the DC empire. The story of DC's secondary business interests is a complicated one of silent partners, publishing names and different addresses, but it all goes back to Harry Donenfield. He was a sharp businessman who had his hand in the comics business, publishing and distributing, in a big way.

Barreaux is credited with drawing these Dan Turner, Hollywood Detective stories. The color story is from Crime Smashers #7 (1951), and the second is originally from the pulp Spicy Detective (January, 1943), by way of the Malibu Comics reprint, Spicy Tales #1 (1988). Robert Leslie Bellem is credited as the writer. He created Dan Turner for the pulps, and was known for his overcooked dialogue like "a roscoe sneezed," and "Jeepers! Baldy's been skewered through the ticker! He's defunct!" Bellem went into writing for television after the pulps were skewered through the ticker. He did scripts for The Lone Ranger, Adventures of Superman, 77 Sunset Strip, and many more. He died in 1968.

In looking at the artwork for these Dan Turner stories I'm venturing the opinion that despite Barreaux's credit they are shop jobs. Maybe he had something to do with them, and maybe not. In "Off-stage Kill" Dan Turner is shown mostly from the back in a very static layout. The only time the story comes alive is when the girls are fighting. "The Murdered Mummy" has some of the same faults, but is much livelier in its layouts. 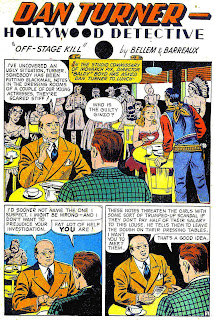 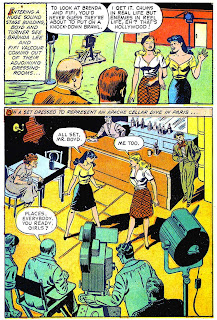 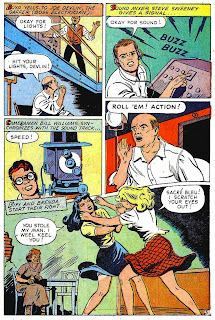 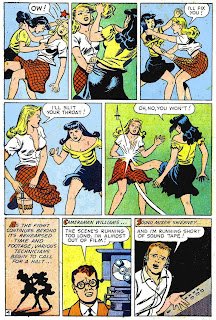 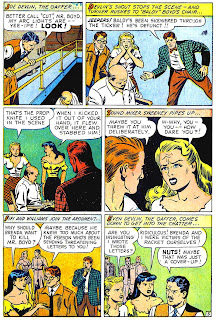 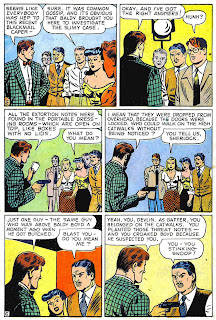 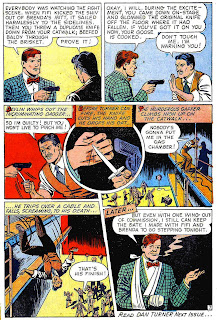 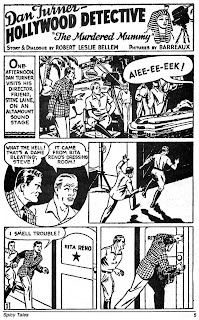 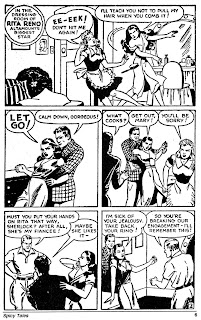 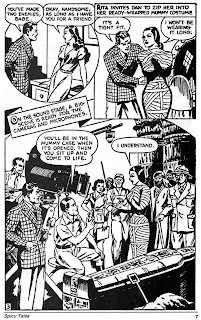 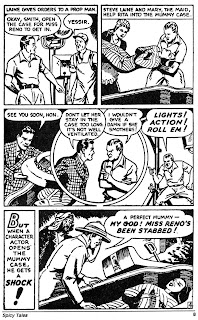 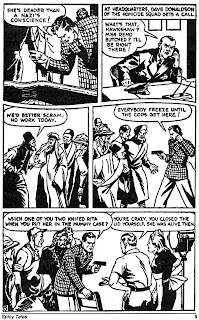 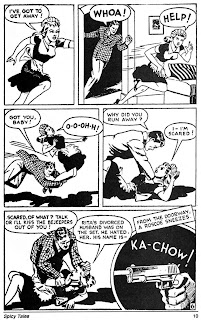 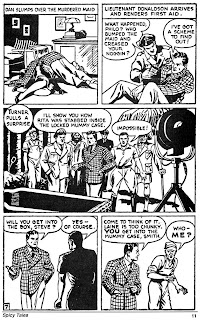 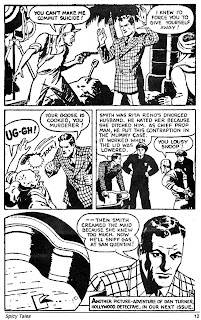 Girl detective runs out into street in her underwear to catch the villian. That takes dedication!

"Beefed Baldy Through the Brisket" is the name of my first album. Pappy, I'm sending you royalties!

I feel sorry for the guys looking for titillation in the 30s, while I have a place in my heart for the 60s "nudie cutie" and burlesque genre (to modern audiences it's so innocent looking), the poor guys in the 30s only had this and french post cards to look at :)

Kirk, I hope it wasn't winter.

I think Dan Turner fell for a preposterous frame job in that last one.

Why would the real murderer worry about being hoist by his own contraption? Also, it's pretty obvious that the gunman who did the maid was a different man from the estranged prop master. Take for example the fact that the prop man is obviously using a five-inch .38 special revolver in his left hand, whereas the maid's murderer shoots a M1911 .45 with his right. That's the sort of thing the cops are going to notice when they dig out the slugs. Once they realize the wrong man has been set-up, it's poor Dan himself who has already admitted to shutting the coffin lid and killing the mummy-girl. Who's sniffing gas now, Turner?

I always did want to see a case go wrong like this! I'd say we were really looking for an service man--going by that officer's sidearm--and the director's jodhpurs are the best clue I've still got all these decades later.

Mr Cavin, I would just like you to know I am in awe of you and your detective skills. Should I ever come a’cropper with a mystery that needs solving I hope I can call on you for help!

What a crazy coincidence! The woman in the illustraion at top of page looks just like Bettie Page, who didn't emerge on the scene until 1950, 14 years after this comic was published. When Adolphe Barreaux became an editor for Fawcett/Whitestone Books in the 1950's he worked on all their Bunny Yeager books, and they became good friends. Bunny's favorite model was Sally Sleuth incarnate!

One suspects that Sally had to be the most red-faced detective on the force, if her many undressing are taken into account.

Cartoonjoe, what is not well known is that Sally posed for covers of Film Fun, Titters, and other pin-up magazines of the era...she didn't mind being seen without her clothes.