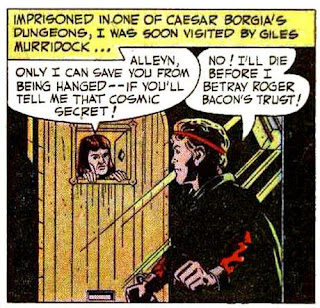 
Edmond Hamilton, writing here as Hugh Davidson, had a long career in the science fiction, weird tales and comic book field. I believe he wrote mainly, if not all, his comic book stories for DC, under editors Mort Weisinger and Julius Schwartz. The story, "Secret of the Ages" is a fantasy about living for centuries with an "elixir of youth." It's a variation on the type of story I showed Monday, from The Twilight Zone. In "Secret of the Ages" a scientist, Roger Bacon, predicts the scientific miracles that will come to the human race in time. An acolyte, Alleyn (later Allan) Kent takes the elixir, keeping him young for centuries while he follows scientific progress, keeping the formula for the "greatest secret" from his villainous rival. 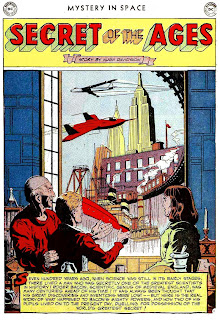 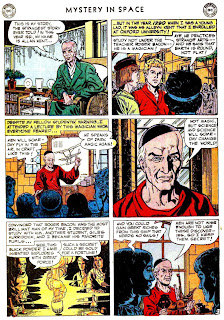 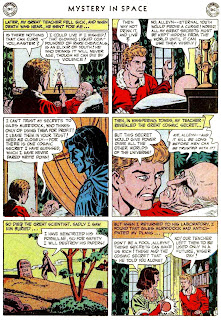 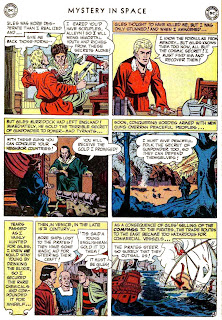 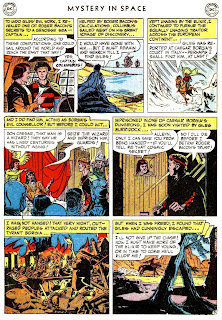 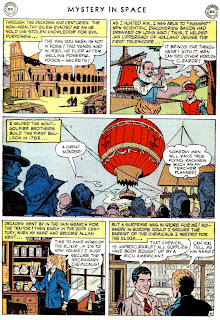 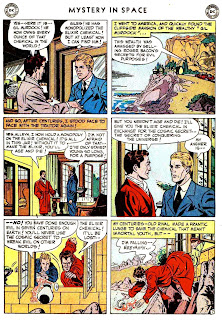 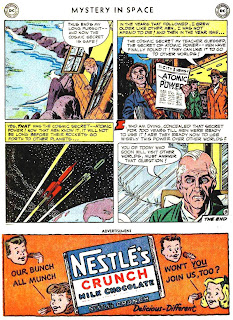 The genre anthologies from DC were just so much fun, and it's too bad that they don't publish stuff like this anymore. I still subscribe to Asimov's Science Fiction and there are short story authors who could write tales similar to this for adaptation to comics, but the Morrison's, Millar's, Bendis types should ever try their hands at it.

I miss the shorter form of comic book stories. It was fun to read those comic books when I was a kid, and made me appreciate how a good writer could tell a great story in just a few pages.

Besides my boxes of comics, my bookshelves are lined with paperback collections of short science fiction by the classic writers of SF's golden age, including Edmond Hamilton.

Thanks for the comments on the last few postings, Chuck.

Is this strip inked by Giunta? I know his drawing style was changing around this time, but the inks look much slicker and Barry-like than I'd expect from JG.