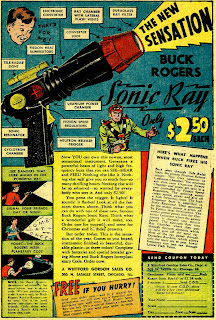 
The Weapon To Win The War!


Wow, gang! A genuine Buck Rogers Sonic Ray, with uranium power chamber, fission heat eliminators, cyclotron chamber and sonic resonator…only $2.50! A bargain like that you won't find from the Pentagon, where a weapon like this would end up costing at least $250,000 each.

This ad came from a coverless early 1950s issue of Boy Comics, and looks to be like what we need to win the wars in Iraq and Afghanistan. Arm our G.I.'s and Marines with one each of these and in no time we'll have our enemies throwing up their hands in surrender and screaming for mercy as the sonic rays cook their brains and turn their internal organs to molten liquid.

Wonder if J. Whitford Gordon Sales Co is still around in Chicago? I'll have to check it out. Maybe I'll send the Secretary Of Defense a link to this blog.

Or this "weapon" could be just a fancy flashlight. But then, you don't think anyone selling ray guns in comic book ads would do anything but sell the real article, would you? I mean, look at the explanation of how this deadly little piece works in the essay, "Here's What Happens When Buck Fires His Sonic Ray." You'll be a believer in no time, just like me. No one would just make this stuff up, would they? 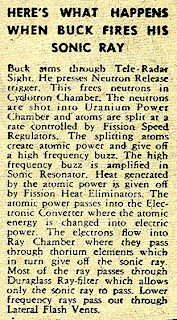