EC: Adultery That's Out Of This World!


"The Space Suitors," appeared in EC Comics' Shock Suspenstories #11, October-November 1953. My first take on this issue was in Pappy's #99.

This story, in its short six pages, embodies everything that EC's science fiction and horror comics are remembered for: great art, sex, and gruesome dead bodies. The art is by longtime fan favorite Reed Crandall. He started his career early in the history of comics, doing Blackhawk for many years before moving to EC. In my opinion his artwork took on an air of sophistication as well as inspiration when he was given his editorial freedom to draw it how he saw fit. Crandall could draw anything, and draw it well. If he had a weakness it was that his characters often looked posed, almost like statues. He didn't have the fluidity of movement in his artwork that Jack Davis did, but he more than made up for it in the mood his drawings could bring to a story.

The story plot is EC 101: Guy falls in love with other man's wife, wife and lover plot to kill husband (didn't anyone in EC Comics ever hear of a divorce?), they kill the spouse, and the adulterous couple get the tables turned on them, usually in a most horrible fashion.

In this case we have a futuristic science fiction setting. Lots of things in the future look more modern, but the old standbys of human nature, sex and jealousy, haven't changed. Milt is the cuckolded husband, being two-timed by his partner Don and his cheating wife, Wanda. The story begins in the present, right after Milt finds out that Don's claims of a uranium-rich strike on an asteroid have been a lie, that he's been lured there to be killed. 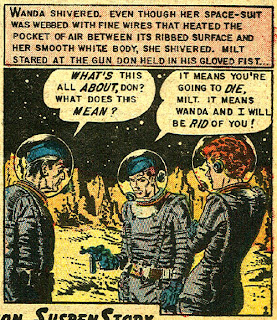 Wanda is not only an adulterous wife, she's vindictive, too. Before he dies she wants Milt to know what's going to happen after he's dead. She and Don are going back to the spaceship to do the interstellar-bop! Milt, who's not as dumb as Wanda and Don think he is, tells them he has known for some time about them. Well, let's hope a guy who is able to get rich has some smarts about him. 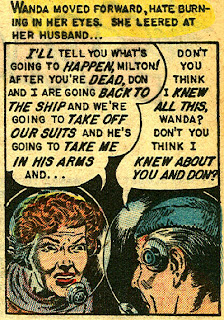 The story moves into flashback, as we find out when Don and Wanda meet they are instantly attracted. Since this is only a six-pager they have to get it on quick, which is represented by a panel of Wanda telling Don how she's hot for his body, and him indicating he has "a plan." 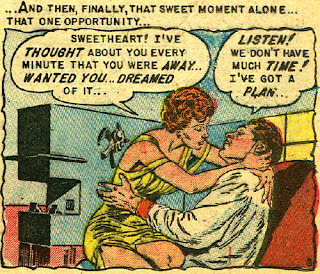 Back in the present on the asteroid, when Milt realizes he's going to be killed, he tells them what will happen if they kill him. 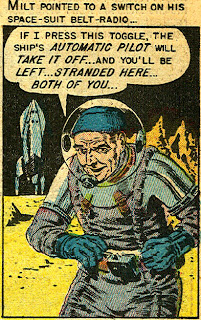 Milt and Wanda have a quick discussion and decide he's bluffing. So Don shoots Milt with his deluxe-looking Rocket Ranger gun, or whatever that contraption is that's in his hand. It actually looks more like a paint sprayer. But this is where comic book coloring comes in handy. Colorist Marie Severin colored the whole hand and gun scarlet red: red for blood, red for danger, red for sex. Even without seeing any projectile or ray from the barrel of the gun, we see Milt has been hit. This is a particularly effective panel. 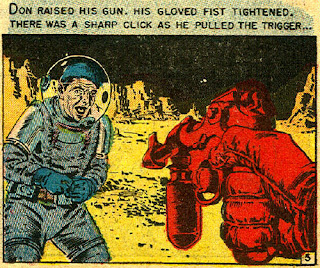 But Milt wasn't bluffing! He hit the toggle as he died and the rocket ship took off, leaving Don and Wanda staring at each other in shock and horror. Oops! Honey, we screwed up! The next panel is a classic: Milt's "bloated, ruptured face," looking like a tomato dropped on the floor. I'm showing you this in color from the printed comic and in black and white from the Russ Cochran deluxe set of Shock Suspenstories. Once again the coloring by Marie Severin has heightened the shock value of this panel, although even without the color Reed Crandall's inspired drawing has created a terrifying and gruesome portrait of a dead man. 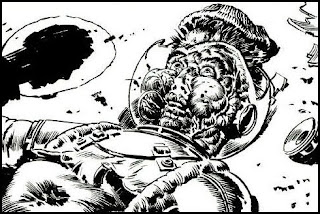 The last panel repeats the "bloated, ruptured" theme, as the lovers die with their hands outside the protection of their space suits. Space suitors, get it? A great play on words. 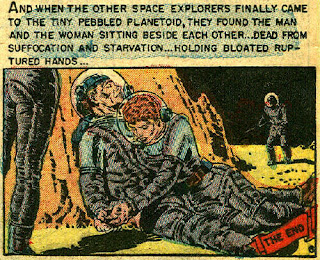 In the Grant Geissman book, Tales Of Terror, the story is credited to the publisher/editor team of Bill Gaines and Al Feldstein. It isn't a complicated story at all. As a matter of fact, it seems almost cookie-cutter in its set-up. It's the visuals that make it stand out. In lesser artistic hands it wouldn't have the ability to shock like it does.

The panel of poor Milt's crushed-tomato face might have been the catalyst to make my younger brother, with rare exception,* never again look at EC Comics. He was about 10-years-old when he saw it. I remember when I first saw it getting that feeling of seeing a dead animal on the road with its entrails splattered over the pavement. But it didn't keep me from looking at EC Comics.

"The Space Suitors" wasn't the first or best horror/science fiction story EC published. But since it was in the first non-Mad EC Comic I ever read, has stayed in my mind for over 45 years. I can still get a jolt when I look at Crandall's superb and ghoulish drawings. It was the sort of thing that made EC great, but it was also the sort of thing that ultimately brought them down.

*This was the other panel my brother was upset by, from Tales From The Crypt #32. This story, drawn by the great Jack Davis, had a lot of humor, and the whole thing was a joke. A really sick joke. 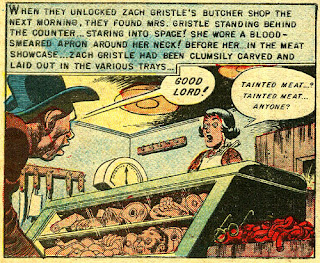