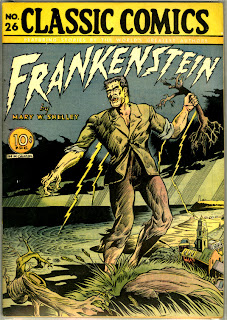 Frankenstein's monster has appeared in so many places it's hard to just pick a representative sample. With this Frankenstein Friday I've gotten away from my original intent of showing you a Frankenstein monster solely from Golden Age comics, but I like these particular covers, either for their historical, artistic or novelty interest.

Classics Comics #26 was definitely a classic. One of my favorite of the early Classics Comics issues, this Frankenstein was drawn by R.H. Webb and Ann Brewster, who also did the interiors. The issue was commissioned from the S.M. "Jerry" Iger comic book shop.
The painted cover version, which came along some years later when Classics Comics became Classics Illustrated, is by illustrator Norman Saunders. Does anyone else share my opinion that Saunders may have used an African-American as a model for this cover? 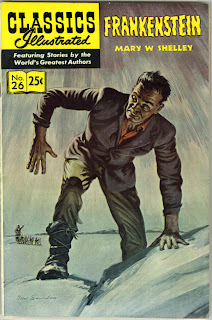 In the early 1970s Marvel Comics came out with their own version of the Frankenstein legend, this time drawn by Mike Ploog, one of the best of Marvel's 1970's monster comics' artists. I'm showing the first three issues so you can see the change in the image of the character. The monster on issue #1 is very different from the visualization on the cover of issue #3. I like Basil Rathbone doing the "It's alive!" shout, done by Colin Clive in the 1932 movie. 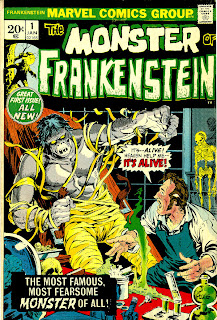 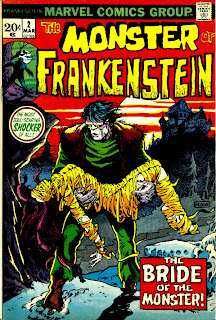 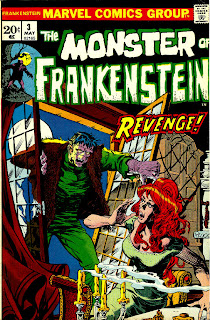 This issue of Famous Monsters Of Filmland from 1963 has a particularly nice colorized cover, using a still from The Bride Of Frankenstein. 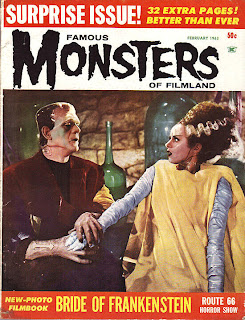 Illustrator Sam Viviano does this funny take on Grant Wood's American Gothic from Thrills & Chills #2 in 1994. Thrills & Chills was a fun magazine published by Scholastic for a dozen-and-a-half issues or so. 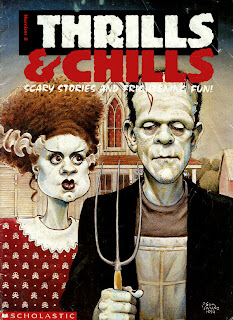 It isn't a comic book, although they published a couple of pages of comics in later issues. It was published during the time that R. L. Stine's Goosebumps series was very popular. There were a couple of issues with the Monster on the cover, but this is my favorite.