Number 2465: Vulcan: Out of the fire and into more fire 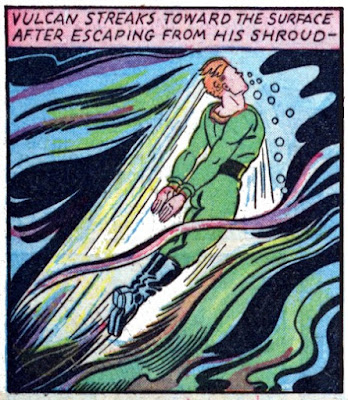 The comic book character Vulcan (presumably no relation to Mr Spock from Star Trek) is found in the Public Domain Superheroes website: “A descendant of the Roman God of Fire who shares his name, Vulcan could control all forms of fire, flame, and heat. His powers also included flight, fire projection, super strength, and being virtually bulletproof (bullets always melted before they hit him).”

Vulcan was inside the volcano taking time to study and decide when to make his debut. He popped out of the volcano in costume, speaking English, ready to fight evil. He became active  in time to get to an American city and rescue a man on fire. The man turned out to work for the arson squad. Amazing coincidence, wouldn’t you say? That reminds me, I once thought Amazing Coincidence Comics would have been an apt title for an early comic book.

There are no credits in the Grand Comics Database for whomever did the writing or drawing. It is crude, especially the lettering. Vulcan lasted a little bit longer than some of the early superheroes, but not by much. His stories were in Super-Mystery Comics for 17 issues, and three issues of Four Favorites Comics, then someone put out the fire on this character.

Grand Comics Database leaves us with this tantalizing sentence: “Per information from the NY Superior Court hearing, Ace art director, Fred Gardener, stated that Patrick "Pat" Lamar's studio provided all of the artwork for this issue, as well as script, lettering, and coloring.” What Superior Court hearing, and why? And it is the first and only time I have seen any reference to Patrick Lamar’s studio, which is unknown to me, and another question mark. 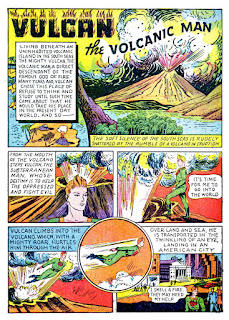 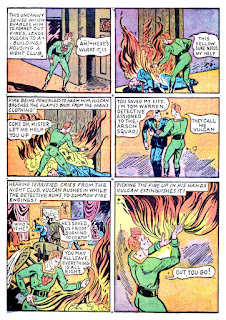 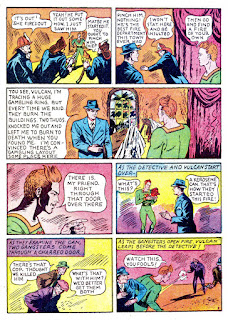 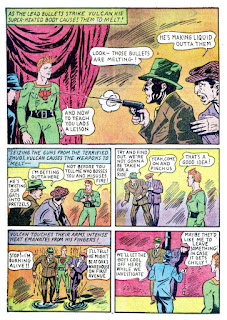 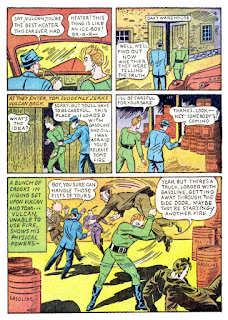 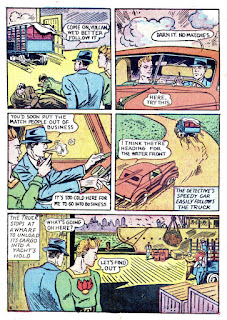 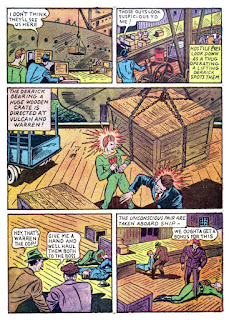 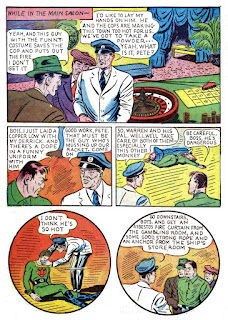 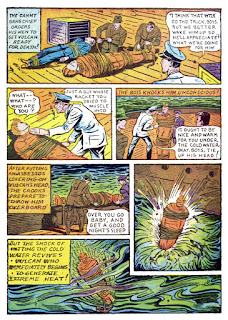 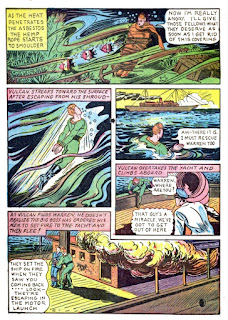 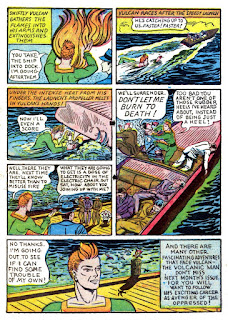 Elsewhere, comics.org and other sources refer to a hearing in which Jim Mooney was identified as working for Ace Magazines having taken place before the NY Superior Court in December of 1941. Surely this hearing was the same. Without access to a law library, I can only guess about the nature of the hearing; but Ace Magazines lasted into the '50s (and then basically morphed into Ace Books).

Vulcan was the Roman analog to Ἥφαιστος, but “Hephaistos” or “Hephaestus” doesn't really work as a name for a super-hero. As to this Vulcan, he seems to combine the powers of the Human Torch with super-strength and an intermittent invulnerability that allows him to use a volcanic explosion to travel thousands of miles and then to land apparently unscathed, but doesn't protect him from a knock-out punch.

Not to be politically incorrect but Vulcan looks like he could.ve been one of the earliest gay superheroes.